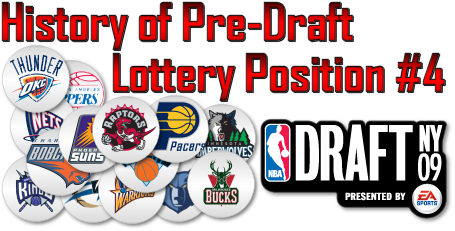 The 2009 NBA Draft Lottery is now officially less than a week away, and as it gets closer, I thought it might be interesting to take a look at the history of teams sitting in our current position heading into the lottery. Meaning, where did teams with the 4th worst record end up after the draft lottery? Now, its not exactly easy to find this information, or at least it wasn't for me, so I had to do a little research and match up season by season records with draft selections to figure out where teams ended up in the lottery. There were a few that were a bit tougher than you might expect to figure out because of record ties / pre-draft trades of certain teams #1 picks in various years. Anyway, on the jump page you can see where the pre-lotto #4 position team ended up after the lottery going back 15 seasons.

If you're still holding out hope for the #1 draft spot and Blake Griffin, please don't hold you're breath as it has only happened one time in the past 15 years for the #4 position team, and oddly enough, that was 15 years ago, and has not happened since. More bad news is that in a draft that is widely regarded as weak overall with a dropoff after the first two selections is that more than 1/3 of the time, the pre-draft #4 wound up with the #3 choice after the Lottery. While that is good news, and an improvement over current position of 4th, Thunder fans are desperately hoping for at the very least a top 2 position, and a chance at the hometown boy Blake Griffin.

Looking over the list below, there are plenty of reasons not to get discouraged even if we end up with the 5th overall pick as notable players such as Dwyane Wade and Ray Allen were #5 overall picks from teams holding the #4 pre-lottery position. I don't think anyone is going to argue too much if we end up with the #5 choice and the player turns out to be the caliber of either of those two guys. Of course if we ended up at #5 and chose a player who ended up like either Nickoloz Tskitishvili or Jonathon Bender (no longer in the NBA), well, I don't think anyone is going to be too happy about that.

I realize its listed below, but in case you don't want to take the time to count them up, in the last 15 years the pre-lottery 4th position team has ended up with the 1st pick 1 time, the 2nd pick 2 times, the 3rd pick 6 times, the 4th pick once, and the 5th pick 5 times. So not only does the 4th position team end up with the 3rd pick more than 1/3 of the time as we mentioned earlier, it also ends up with the 5th overall pick, exactly 1/3 of the time as well. So I guess one could deduce that we have about a 73% chance of either ending up 3rd or 5th after next Tuesday's NBA Draft Lottery (May 19, 9:30pm Local), if history has anything to say about the matter.

So that "Worst Case Scenario" post we made yesterday hasn't happened in the last 15 years, and probably hasn't ever happened, but I can't say for sure because I only went back the 15 years. Hey sorry, there is only so much time in the day! In fact, not only has the 4th position team never ended up with the worst case scenario of picking #7 overall, but they also never ended up picking #6 overall either (again, in the past 15 years). So one thing you SHOULD (I emphasize "should" for a reason) be able to bank on is the Oklahoma City Thunder winding up with at the very worst, a top five position in Junes Draft.