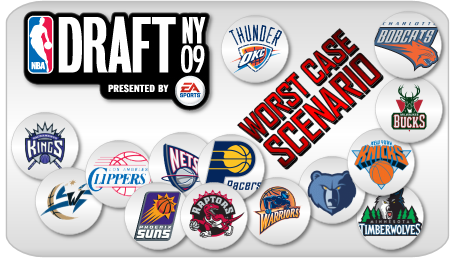 If you read our story, "Understanding the NBA Draft Lottery System," you probably saw that we mentioned the Oklahoma City Thunder's worst case scenario coming out of the NBA Draft Lottery. Towards the end of the post, we dove into the Odds of the Thunder winning the top spot in the lottery and in that same paragraph, briefly mentioned that the Thunder could walk away from the Lottery, with a Worst Case Scenario of, getting the #7 Overall Pick. So I thought it might be interesting to take a look at what our options would be should a disastrous lottery happen next week.

First of all, we might as well talk about what it will take for us to end up with the #7 overall pick, right? That way you at least realize the chances of this happening are extremely slim. At the same time though, nothing is impossible, just ask the Bulls about their slightly better than 1% chance of landing the top spot and grabbing Derrick Rose Last year. Although I don't know the odds of the Thunder winding up with the #7 pick, I can't imagine that its any better than what the Bulls had last year for winning the top overall pick, but again, it could happen. If you didn't read the post we mentioned above, it would take 3 teams outside the bottom four (Sacramento Kings, L.A. Clippers, Memphis Grizzlies, and Oklahoma City Thunder) landing the first three selections in the lottery. In the off chance that that happened the Kings would wind up with the #4 pick, Clips with #5, Grizzlies with #6, and the Thunder with the #7 overall pick since teams who don't get selected to the top three are arranged in order from worst record to best and assigned slots 4-14 based on that.

What we're about to discuss here is completely unscientific and would be potentially thrown out of whack since the OKC Thunder would no longer be picking in the top 6, and perhaps one of the other teams that would leapfrog them in position, would draft for need instead of picking the best player on the board. So disregarding that and looking at three Mock Drafts, we're going to eliminate the consensus top 6 picks from Ridiculous Upside, Draft Express, and HoopsHype. In all three of these mock drafts, they have the following players being taken in the top 6 places of the 2009 NBA Draft (Ordered here as seen on Ridiculous Upside): Ricky Rubio, Blake Griffin, James Harden, Hasheem Thabeet, Brandon Jennings, and Jordan Hill. So assuming that these 6 players are gone, and the Thunder are on the clock, what options would Sam Presti be looking at?

If we get stuck with the #7 overall pick, and the 6 guys listed above are gone, I think perhaps we should shift our focus to finding the right guard to fit our  lineup.  The reason for this is outside of finding a solution in the backcourt, our other big hole is at Center, and after Thabeet, the next center is not likley to come off the board until around the 20th pick. Looking at this draft class, guards are likely to be going at a very quick rate, especially after Griffin, Hill, and Thabeet come off the board. But, do we want to focus on bringing in a shooting guard, or can we find the point guard of the future in this group of guards and shift Russ back to his natural position? As much confidence as I have in RW0 growing into a solid point guard, it likely is in the best interest of the team and Westbrook to go ahead and move him back to the 2, and look toward drafting a point guard with the #7 overall pick. But which one?

Well, if you ask me, when you have RW0, Kevin Durant, and Jeff Green all in the starting lineup, you really need somebody to get them the ball and be a big time assist guy. For me, the best fit of the remaining point Guards is Ty Lawson. There are several reasons why I like Ty Lawson for the Thunder with the #7 overall pick. First and foremost is solid court vision which leads to a phenomenal assists to turnover ration, 6.6 to 1.9 per game. For a young team, turnovers are always a BIG problem, and that proved to be the case this season for our young team, so having a point guard who is careful with the ball and not turning it over constantly is a big plus. Another reason why he is a nice fit is because of his quickness and speed, which makes him deadly when leading a fast break. Seriously can you picture Ty leading a fast break with Westbrook, Green, and Durant all sprinting down the court with him? How do you stop that? Finally his outside shot would add a much needed boost from beyond the arc and his overall shooting percentage is pretty solid as well. He is a true point guard who could develop into a solid leader of the offense with the proper coaching and guidance. He can come in and immediately be productive and help this ballclub win. With Lawson and Westbrook in the backcourt, you could definitely be seeing the makings of one of the better guard tandems in the league should they both meet their full potential.

Several other options at point guard could also be Stephen Curry and Johnny Flynn, but I don't believe either of those guys' game would fit our style of offense as well as Ty Lawson or be able to distribute the ball as well. I'm curious as to what Thunder fans think we should do if put in this position, so please, by all means, post your thoughts below. Also, there is always the option of trading down, is that something we should consider if this were to happen? I personally don't think so, but would love to hear arguments to the contrary.