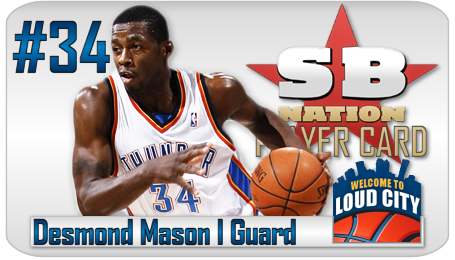 Okay, so I know this is a little later than I promised, but hey, you're still getting it on Thursday. Today's EOS Evaluation brings us to Desmond Mason. How many great things are there to say about Des? Probably more than I'm going to say during this whole piece, but that's not to say there won't be a lot of complimentary things. D-Mase is a local guy who played at Oklahoma State, and was in Oklahoma City during the Hornets short stint here, after getting displaced following the events of Hurricane Katrina. So it goes without saying that the fans here have a unique and special bond with Mason. To make the love affair even stronger, he's a guy who is very active in the community, and its really quite impossible to dislike a guy who donates his time and efforts to the area.

But what about his performance on the court? After all, his contract is up, and his future with the team is up in the air. Will the Thunder consider bringing him back? Is it worth bringing him back? Unfortunately for Desmond, he didn't get as much of an oppertunity as he would have liked on the court to help his cause heading into the offseason. If you missed it earlier this year, Des suffered a season ending knee injury about midway through the season, and has been inactive ever since. The one positive thing that I saw come out of it was that his leadership was not lost after his injury. He was there for each and every game, on the bench, supporting his team, and staying active with his teammates during timeouts. It was exactly the show of leadership that this young team needs, and may lead to a contract being offered to keep him with the Thunder.

Perhaps there is a bigger question regarding whether the Thunder will extend him an offer to stick around past this season. Is there a place for him on the roster, and a role for him on this team? Since he went down with a knee injury, the Thunder have traded for Thabo Sefolosha and signed Shaun Livingston. Aside from those two, you still have Kyle Weaver, Chucky Atkins, Earl Watson, and of course, Russell Westbrook all under contract for next season at the guard positions. My guess right now is, that if they do decide to bring him back, it'll likely be as a forward, as opposed to shooting guard, which is the position he spent most of the season starting at before the injury. There is also still a lot of personal shuffling likely to happen this summer with some of the guys I mentioned above, so for now, his future remains up in the air. My best guess is that he'll be back for his leadership qualities alone. After all, even after they knew he was done for the year, they allowed him to continue to play a role in helping to motivate and mentor some of these young players. That alone makes me think the Thunder have designs on bringing Mason back for another season, or two.

If you were to look at his statistics this year, you might be thinking otherwise, as they are mostly down from his career totals. But numbers are not the reason the Thunder made a trade to bring him back to Oklahoma City. That reason was intangibles, all the little things that don't show up in the box score. First and foremost on that list, and I've already mentioned it a few times above, is leadership. Without question, Desmond was the one guy on this team that you could look at and say, he's leading this team. Its not really a surprise, since most of the team is so young and focused on growing and developing their game. Another thing he seemed to always be able to do was come in off the bench during a drought and re-ignite the offense. He may not be the greatest shooter or the best rebounder in the league, but when the team needs somebody to step up and make a big play, it was usually D-Mase who stepped up and made something happen.

What do you guys think about Mason? Should the Thunder bring him back? Do you think they'll bring him back? Right now, I'm still really not too sure. So many things are setting up to go down this summer that its hard to make sense of exactly what the roster is going to look like next season, and I just don't know if there will be room for Mason once its all said and done. One thing is for sure, you aren't going to piss off any fans by bringing the guy back, and you know you'll always have that veteran leadership around that so many of these young guys need as they continue to mature. One thing is for sure, the Thunder didn't seem to play nearly as well after he went down, well, pretty much until Sefolosha came to town and helped turn things around. In the end, his acquisition could be the one thing that stands in the way of Mason sticking around for another year or two.