Thunder and Lightning? Check this out!

Share All sharing options for: Thunder and Lightning? Check this out! 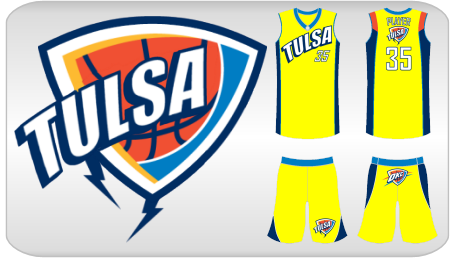 So maybe you saw my little rant of a fanpost over at Ridiculous Upside the other day, which basically called in to question why the D-League Uniforms are so mundane. Anyway, amidst the commenting of that thread I was reminded of a rumor I heard earlier this season regarding the Tulsa 66ers and a possible name and color change. This of course was all brought about by the Oklahoma City Thunder's purchase of the Tulsa D-League Franchise earlier this season. The rumor that I heard was that perhaps they would try to connect the two teams in the form of colors, logo, and nicknames. The NBA Squad is called Thunder, and thus the D-League squad was to be nicknamed what happens shortly before Thunder...Lightning. It's pretty cool when you think about it, Lightning comes before Thunder, and a developing player can be a member of the Lightning before getting the call up to the Thunder. Now, I'm not the greatest graphic artist in the world, but I took a shot at what a quick logo and uniform set could look like.

Now I really don't know if they'd seriously alter the OKC logo into a D-League logo, but from the rumor I heard earlier this year, thats what I was made to believe. Let's not forget, a rumor is just a rumor, and who knows if any of this will ever see the light of day. Anyway, I modified the Thunder logo to include the word Tulsa, instead of OKC, and removed the lines under the logo, and incorperated a few subtle Lightning bolts. It may look like a simple mod, but just so you know, I spent a few hours on that damn thing, because it wasn't quite as easy as I thought it would be. The uniforms however where pretty easy because I found a blank template over at Chris Creamers Sports Logos. I filled in what I think the colors should be as well as wordmarks, logo's, name, and numbers. I've included Home and Away uniforms, and the only thing that I didn't have time to do was change "Tulsa" to "Lightning" on the home uniforms. Hey, its getting late, and you can get the basic idea anyway.

Below you can see a semi-large version of both the logo and Uniform sets. Let me know what you think about them. Also, what do you think, in general, of the whole "Thunder-Lightning" name affiliation that might already be in the works? Do you like the idea of the Tulsa D-League Squad being more easily associated to the Thunder in terms of name, colors, and logos? Would you be upset if they ditched the 66ers name? One thing is for sure for me, these uniforms blow away anything in the D-League currently, and I designed them in about 15 minutes. Seriously though, I wish they'd give us better uniforms, and please, by all means, post your thoughts and comments on this rumor/issue. 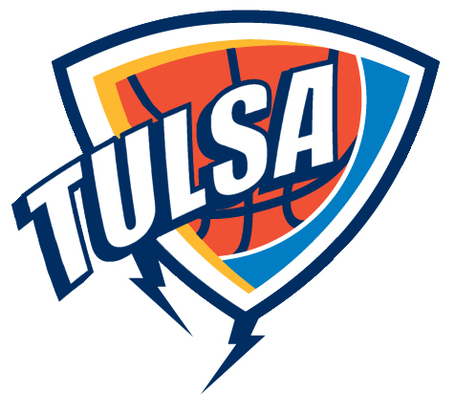 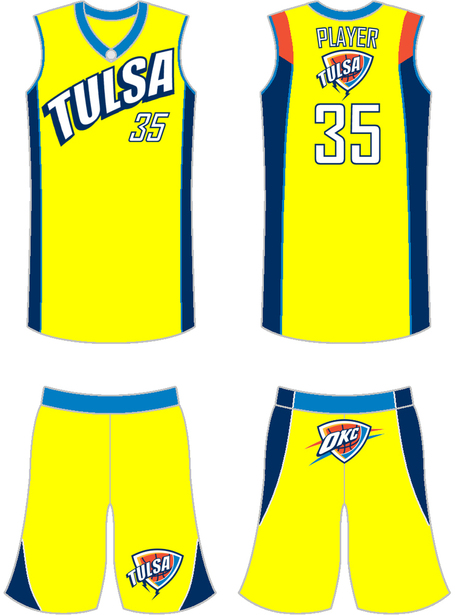 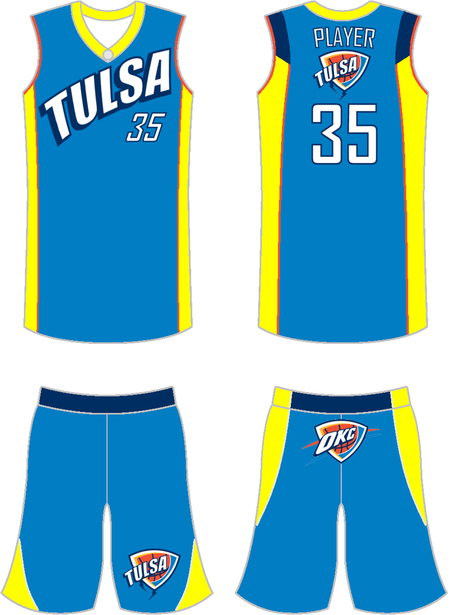 Like this post? Check out how we think each Thunder player did this season in our ongoing EOS Series. (Click the Picture to read each players Evaluation)