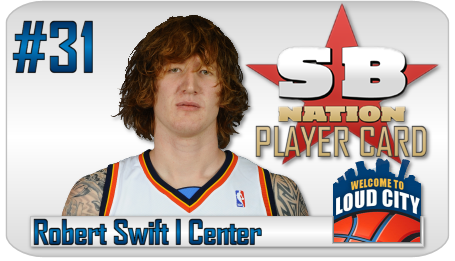 The focus of today's evaluation is the most recent player in a long line of failed 7' foot centers for the Sonic/Thunder organization. Robert Swift is a strange case when you take a step back and look at his entire 4 year NBA Career. He was drafted out of high school with the 12th pick by the Seattle Sonics in the '04 draft. 3 years later, the Thunder still didn't know what they had because of his injury plagued first 3 seasons, and decided to take a chance and signed him to a 1 year deal. In his forth NBA season, the first in Oklahoma City, he continued to struggle with injuries and only saw his way to the floor in 26 games. To give you an idea of just how plagued he's been by injuries over his 4 year career, his 26 games played this season was his second most ever. When you add them all up, he's averaging a meager 24 appearances per season. Not exactly what you hope for when drafting a 7' center out of high school with hopes that he'll develop into a productive and defensive minded NBA center.

I remember being at the game when he made his Thunder debut, way back in November, against the Atlanta Hawks. I was actually surprised by the response of the crowd as he jogged onto the court. The applause where Thunderous, and it was clear that his sleeved out (tatooed) arms, and mop top hair, immediately made him a crowd favorite, and a guy that the people in the Ford Center clearly wanted to cheer for. A few months later, during the last game I attended, that Swift actually played in, it wasn't nearly as big a reaction during the 122-120 loss against the Nuggets. Of course the home crowd will always cheer on our players, but the reaction to him hitting the court was nothing like the initial reaction back in November. Now, maybe that was because he hadn't played up until the Atlanta game, and the fans were welcoming him, or just maybe, by the time that Denver game rolled around, the crowd had become indifferent to him because of all the missed games, and lack of production during games he did play. Still, at 23 years old, is his size alone worth taking a chance on bringing him back? Find out below the fold.

The first thing you'll notice about Robert when he trots out onto the court is that although he's a  "big body," he tends to be rather goofy, for lack of a better term. The word "Athlete" doesn't really come to mind when you watch him running up and down the court. Aside from that, at times, he just looked rather uninterested in what he was doing, and didn't seem to want to be out there, but then other times, you'd really see him getting after it and diving for loose balls and everything. For awhile he almost had me convinced that he really didn't have much interest in actually playing basketball, and was just going to ride this thing out as long as he can, to keep collecting those fat checks for sitting on the bench.
P.J. Carlesimo really didn't it make it much of a secret that he was pretty disappointed with what Swift was doing early on during the season while he was sidelined with a hand injury. To me, it really seemed like P.J. was calling him out for basically acting like a baby, and felt like Swift should be out there playing. Perhaps that is the reason I got the sense that he was simply collecting checks as opposed to having a healthy interest in getting better and helping this team win. Its a damn shame too, because when you consider his size, and his age, he could have been the guy pushing this team forward toward the playoffs from the inside. Instead, his contract has expired, and the Thunder have likely already given him his walking papers.

If you want even more evidence that the Thunder are likely to let Swift go, just take a look at your D-League affiliate, the Tulsa 66ers. Remember Steven Hill? Yeah, I thought you might, he was another young 7 footer that the Thunder acquired early in the season, and was on the roster for a bit before they released him to clear out a roster spot for Nenad Krstic. Eventually he got picked up in the D-League, and the 66ers quickly made a trade to bring him back into the organization. So what does all this have to do with Swift? Well, think about this, Steven Hill spent the majority of his time in Tulsa sidelined with an injury, but could be seen on the bench throughout the entire remainder of the season. If they didn't plan on keeping him around to develop, wouldn't they just cut the guy loose? Most likely, and the fact that they didn't makes me believe the Thunder want to keep him around, most likely in the D-League for another season to see if he can develop and possibly make an impact with the Thunder in 2010-11. With Collison and Krstic coming back next season, I don't think the Thunder will get super aggresive with trying to bring up a center from Tulsa, unless either of them get injured. Hasheem Thabeet could affect things as well, if he ends up being the Thunders top draft pick this June. In any case, I don't really see a scenario that will bring "Sleeves" back for another season, so long Swifty.