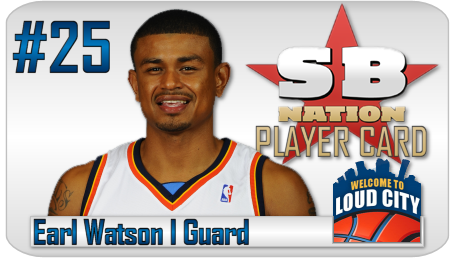 The target of today’s EOS Evaluation is Earl Watson, and out of all the players on the Thunder roster this season, I’ve made no secret that Earl is my least favorite player. Look, I hate to bag on one of our players, but I’m just not a fan of what we saw out of him on the court this season. I can’t be the only one who felt that way either, since he eventually was forced to give up his starting position in favor of rookie Russell Westbrook. Over the course of the season, Earl began to see his minutes eaten up by other Thunder guards as well, such as Chucky Atkins, Kyle Weaver, and more recently Shaun Livingston. In fact, for the better part of the past two months, he hasn’t been playing at all (Save for the season Finale in Los Angeles).

So when you have a guy pulling in 6 bills and he’s riding the bench, you kind of expect for him to be moved at the first opportunity. Luckily, it shouldn’t be too difficult since he does have an expiring contract that teams looking to clear out space for next summer’s free agent bonanza, should be interested in acquiring. Who knows, maybe Sam Presti will be able to combine Watson with one of our extra 1st round picks for a veteran player who can come in and be productive and help this team win. No matter how it happens though, I do fully expect Earl Watson to be moved before the start of next season, one way or another. But how did he fair this season in games he did get to play? Find out below the fold.

Well, first off, I guess I should mention that for the better part of the season he was dealing with a hand injury that definitely affected what he was able to do on the court. So I guess there are two ways you can look at it, the first of which is to give the guy props for toughing it out and playing through the pain. The other way you can look at it is to say that he was selfish and continued to play even though he wasn’t 100%, and ultimately it ended up hindering the team more than it helped. I’m not really sure which way I lean, because I always am happy to see guys want to play, and who are willing to play through injuries, but in this case, I think maybe he was playing through the injury because he wanted to hold onto his starting job, and knew if he missed time now, his job wouldn’t be there by the time he got back.

Whatever the reason, his play on the court was sub-par all the way around. As a point guard, you expect him to run the offense and make crisp clean passes and essentially create opportunities. The one thing I did like from his this season was the way he ran the offense, in the sense that you could always see him calling out plays and directing his teammates on where to go. Unfortunately, he still saw a drop off in assists per game by 1 full point, and again, maybe it goes back to his injured hand. Things weren’t any better in the shooting department, and every time Earl went to put up a shot, I just cringed at the sight of it, and hoped someone was around the basket to go for the rebound. But as bad as his two point shooting was, his three point shot was an unbelievable 14 percentage points lower than what it was last season, yuck. Even worse than his shooting was his defense, which at times, looked as if he either didn’t know what he was doing defensively, or had no desire to play solid D. For a team attempting to build a defensive-minded championship caliber team, this is a big problem, especially when there are so many young players around to rub off on.

With the team signing Shaun Livingston shortly before the end of the season, it just seems like management has made up their mind on Watson. Seriously, why keep him around with a 6 million dollar salary when you have Livingston ready to back up your starting point guard, and Chucky Atkins pulling down roughly half as much that can be the third option should the team need one. That’s not even mentioning if the Thunder also decide to bring back Desmond Mason, which would erase pretty much any chance at all that Watson would ever hit the floor as a shooting guard either. At this point, I just don’t see how he fits into Oklahoma City’s plans for the immediate future. I think its time they go ahead and cut him loose, and see what kind of value they are able to pull from his expiring contract.