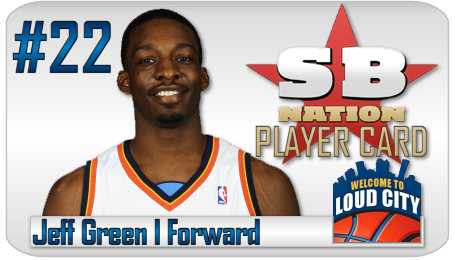 Our End of Season Evaluation series continues this week, and first up is the sensational sophomore, "Uncle" Jeff Green. The series will continue all week long with Earl Watson on Tuesday, Robert Swift on Wednesday, Desmond Mason on Thursday, and concludes on Friday with Kevin Durant. Jeff Green's 2008-09 season performance was leaps and bounds improved over what we saw out of him as a rookie, and has shown signs that he may be growing into a potential star player. He might have spent the entire two years of his NBA career playing in Kevin Durants shadow, but if he continues to make strides from one year to the next, as he did this season, he's going to be a highly productive player in this league for many years to come.  But is he the long term answer for this team at the power forward position? Its been argued all over the internet as to whether he's capable of being the long term solution at the 4. We'll discuss that throughout this evaluation.

Below the fold, you'll see Jeff Greens 2007-08 statline from his rookie season in Seattle, and his statline from the Oklahoma City Thunder inaugural season. He improved his game in nearly every single statistical category, and the ones he saw a dropoff were not only rare, but extremely minimal. His turnovers per game got worse by .2 per game, but when you factor in that he was playing 8 more minutes per game, that's actually an improvement as well. The only other major stats that weren't as good this year as last were blocks (.2 less than last year), and personal fouls (.1 more than last year). So again, factoring in the extra playing time, the only real stat that was worse this year than last was blocks per game. Every other major statistical category saw improvement, and in some cases major improvements.

In his sophomore season, he saw a lot more action, and was getting the minutes needed to push his development forward. With those extra minutes he saw an increase in points per game from 10.5 to 16.5, 4.8 to 6.7 in rebounds, 1.5 to 2.0 in assists, and probably the most important improvement this season was his 11% better shooting from behind the arc. Now, although you really aren't looking for 3 point shooting out of a power forward, for a team that struggled from beyond the 3 point line all season, it was a welcome and much needed improvement. There is no question that Jeff Green's progression this season was nothing short of tremendous.
But back to that question of whether or not Jeff Green is the starting Power Forward of the future. Well, that is a very complicated question, especially if the draft lottery balls fall in Oklahoma City's favor and Blake Griffin ends up being the #1 pick in the draft for the Thunder. In that scenario, I would expect Green to continue starting for another full season, as a young Blake Griffin works in off the bench at the 4 and 5 positions. People might call me crazy for saying that, but I think taking the pressure off of Griffin, giving him time at both the power forward and center positions, in conjunction with limiting his minutes to around 30 for his rookie season would be beneficial for his long term development. For Green it would give him another season to develop at the Power Forward position while they test the Griffin at Center to see if they can keep Green at the 4, and Griffin at the 5 for the long haul.
If the Thunder don't feel like Green is the long term answer at Power Forward, he may eventually be relegated to coming off of the bench. As mentioned above, his improved 3 point shot could be beneficial in the sense that it adds a bit of versatility to his game that would allow him to play anything from the 2 to the 4. Again, people may call me crazy for saying that Green could come off the bench as a 2, but I think over the next year or two he's going to continue to become more versatile and his game and size will allow him to play any of the those three positions. If he was to eventually be a guy who comes off the bench, he'd in all likelihood be one of the very best "6th man" guys in the entire league.
But with the terrific season he had, why are we even talking about him being replaced at power forward or coming off the bench? Well, there are a number of reasons, the first of which is that he seems to be a natural small forward who has been forced to play the 4 to make room for Kevin Durant at the 3. Secondly, the Thunder are looking for dominate players inside as they attempt to push this team towards a championship in years to come, and Green just isn't a guy who is going to be dominating on the inside. He's more of a finesse player who will get in there and do the dirty work, but doesn't have the size to really get in there and bang opposing teams big men around.
Of course if the Thunder aren't able to pluck Blake Griffin in the draft, there will be no question who the starting power forward is and will be for next season. If Uncle Jeff is able to progress next season as he did this season, he may very well turn into one of the very best offensive power forwards in the league. But defensively, I just don't think he has the size to be the defensive stopper in the middle that we would like to see. Again this is mostly due to his size and being more of a finesse player than a physical player. Overall though, you can't say too many negative things about the season that Jeff Green had. He improved in nearly every major statistical category and did so in the shadow of Durant, and in a very quiet manner. He has a very bright future no matter how the Thunder decide to use him in the future, and he's just another one of those tremendous character guys that Presti is trying to assemble a championship contending team with.