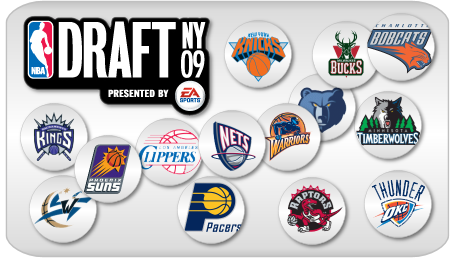 We're now less than a month away from the NBA Draft Lottery selection show (May 19, 2009), and it dawned on me that many Oklahoma City Thunder fans might not have a full understanding of how the NBA Draft Lottery works. I know there are a lot of fans who didn't follow the NBA as close as they do now because we never had our own team to cheer for until the Thunder came to town. So if that's the case, you many not realize that we have a chance at getting the #1 overall draft pick. You also may not realize why we have that oppertunity and the odds of us getting it, as well as how the whole system works. So I thought I'd take a minute out and lay it all out there, so Thunder fans, and anyone else for that matter, who might not have a good working knowledge of the NBA Draft Lottery and how it works, will know whats going on come Lottery time next month.

To start, I'll give you synopsis of how the NBA handles the draft and order selection as compared to say the NFL Draft which is coming up tonight. The biggest difference between the NFL Draft, and the NBA draft is that the NFL relies solely on team records to determine its draft order, a simple worst team picks first scenario. The NBA however, uses a "Lottery" system to choose its draft order for the bottom 14 teams in the league. The draft lottery determines the first 3 picks in the NBA Draft, and then 4-14 are based off team records from the remaining teams not lucky enough to get a top 3 pick. But it doesn't seem fair that a team that finished just outside the playoffs has as good a chance at the number one pick as the worst team in the league does it? No, and that's why they don't have nearly as good a shot at winning a top 3 pick as the worst team in the league. Each team, starting with the worst team in the league, have decreasing odds of winning a top 3 pick. For instance, the Sacramento Kings have a 25% chance of winning the top pick, versus just a 0.5% chance for the Phoenix Suns.

So how does the selection actually happen? That's where it gets a little more complicated, but I think I'll be able to lay it out in a way that's easy enough for anyone to understand. The lottery works the same as say the "Powerball" lottery in the sense there there is machine filled with equally weighted balls that randomly pop out to form a sequence of numbers. In the NBA Draft Lottery, the machine is filled with 14 certified, sized, and weighted balls numbered 1 through 14. When the machine is turned on, they will pull 4 balls to form a 4 number sequence, and the team assigned that four number sequence will be granted the #1 overall pick in the draft. The same process is then repeated to determine the number 2 and 3 picks in the draft. Think of it this way, with 14 lottery balls, and a 4 number sequence, there are 1,001 different number combinations, and with Sacremento holding a 25% chance of winning the #1 overall pick, they are assigned 250 different number combinations before the draft lottery begins. An easy way to think of it is that there are 1001 tickets given out to 14 teams in the draft, and the worse the record, the more tickets that team is given, which gives them better odds of walking out with the number 1 overall pick, or top 3 pick. Once the first 3 picks in the draft are determined by the lottery, the remaining 11 teams are assigned picks #4 through #14 based on their record. So if the Kings don't get any of the top 3 picks, they would end up picking #4 because no one has a worse record.

The lottery itself takes place behind closed doors (which I think is a Huge mistake, imagine the drama of watching the lottery balls live!) about an hour before the draft order is announced on live television. Representatives and media are allowed in the room as the lottery balls are pulled and the winning three teams are selected. Since the lottery takes place about an hour before the teams are announced on live tv, anyone in the room has to surrender any and all devices that would allow them to leak the information before the live broadcast. They then remain sequestered in the room until after the entire broadcast has concluded so that there is no chance of a leak occurring. Obviously each team is allowed to send someone from their own personal staff to watch the drawing of the balls, so that everything stays on the up an up.

For the Oklahoma City Thunder, we have the 4th best odds of winning the top pick in the draft. We have an 11.9% chance of winning the lottery, which is equivalent to us holding approximately 119 tickets out of the 1001 available. So although we have the 4th best shot at winning the lottery, our chances are a little less than half as good as the Kings who hold 250 lottery tickets. But those 119 tickets are more than 10 other teams in the lottery will get, so we do have really good odds at landing one of those top three picks. If the worse case scenario happens for the Thunder, it would include 3 teams with better records than our own (meaning teams with a lower percentage of winning a spot in the top 3) winning the top three spots in the draft. If that were to happen the Thunder would still have 3 teams with worse records than their own in front of them as they assign the remaining 11 teams draft spots. In this worst case scenario, the Thunder would end up with the #7 pick in the 2009 NBA Draft. I really don't know what the odds of that happening are, but they are probably pretty low. We'll likely end up with a top 5 overall pick, but of course, we're hoping for somewhere in the top 3, and better yet top 2. Getting the number 1 overall pick would be so huge for Oklahoma City its almost hard to describe since the consensus top player in the draft is Oklahoma's own Blake Griffin.

I hope that gives you a better understanding of how the draft lottery works, and what our odds are going into it. If you have any questions, please post in the comments and I'll do my best to answer.

The teams entered in the lottery, to be held on May 19, 2009, are as follows (note: the first three picks in the Draft will be determined by the lottery and the remainder of the "lottery teams" will select in positions 4 through 14 in inverse order of their consolidated standings at the end of the regular season):