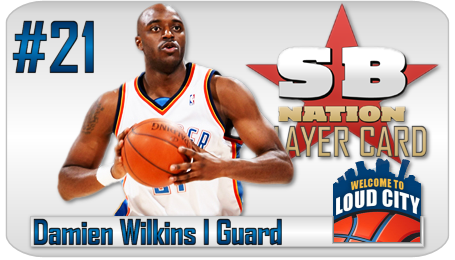 Damien Wilkins is the tenth player in our End of Season Evaluation series, (click any player card at the bottom of this post to read more) and up to this point, I probably haven't had as hard a time writing a season evaluation as I will for Damien. The biggest reason for that is, its been so long since he's been a regular contributer on the team. Outside of the final game of the season, his last couple of appearances were on March 22nd and 27th, and before that he had a 6 game stretch to begin March that he also saw action. Outside of that, you have to go all the way back to November and December to find any signs of regular contribution for Damien. It seemed as though he entered the doghouse pretty soon after Scott Brooks took over the head coaching duties. He never really saw any steady playing time in 2009.

Just by taking a quick look at his 2008-09 stats, there is a pretty large drop-off over what we've seen out of Damien the past three seasons in Seattle. First and foremost is games played, and over the past three seasons for the Sonics, Damien averaged 80 game appearances per season compared to just 41 this season. His points per game had increased every season of his career, topping out at just over 9 points per game last season before falling off to a career low 5 per game this season. His rebounds and shooting percentages also saw a pretty large drop-off, as well as his minutes per game. When you look at all five of his seasons in the NBA, including his rookie season, this was easily his worst season.

One weird thing you might notice in his stat line is that he actually shot better from 3 point range than from 2. So even though the Thunder could have used his three point shot more often, they couldn't use it if it came along with a horrible overall shooting percentage. Again, its hard to remember back to when he played regularly, but I do remember getting quite frustrated with his poor shooting and overall pretty bad shot selection when he was still getting regular playing time. Outside of Earl Watson, I don't remember being frustrated with any other player quite as much as I did with Wilkins.

On a young developing team, its not surprising that he found himself on the bench for most of the season. After all, Damien is 28 years old, and doesn't really bring a lot to the table anymore. He's undersized to play the power forward position, and once Brooks moved Kevin Durant to the 3, it pretty much relegated Wilkins to coming off the bench as a shooting guard. With guys like  Russell Westbrook, Mason, Watson, Atkins, Sefolosha, Kyle Weaver, and Shaun Livingston all fighting for minutes (throughout the year) at the guard positions, Wilkins just became the odd man out. At his age, you pretty much know where he is, and where he is going, and he's not likely to improve much through the rest of his career. It only made sense to start moving on as this team tries to gain experience and grow.

He is still under contract for one more season, but I don't expect him to be here for the 2009-10 NBA Season. I'm not sure how they'll go about getting rid of him, but there is no reason to bring him back. Especially with the team likely to be adding a number of new players through the draft, trades, and free-agency. I figure Wilkins, along with Watson, Rose, and Robert Swift (possibly Chucky Atkins) are the guys with the biggest risk of getting the boot this off season. I would expect Wilkins should be fairly easy to move since he does have that coveted expireing contract, just in time for the 2010 free agent bonanza. Damien shouldn't be too difficult at all either since he's only set to earn about 3 million next season, and its likely that teams will be looking for bargain players with the state of todays economy.