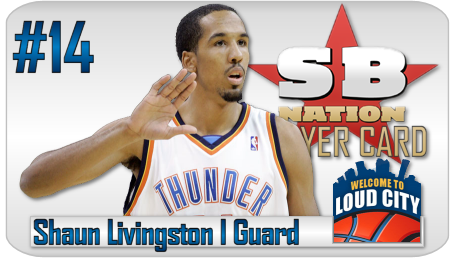 Shaun Livingston is a guy that you might not be too familiar with since he only recently joined the team. If that is the case you may not know that he was a top 5 pick in the NBA draft back in 2004, and was touted as one of the next great "up and coming" players in the NBA, until his horrific injury. In case you haven't seen it yet, you can watch the video (WARNING: If you are squeamish, don't click the link, its pretty gruesome) of his absolutely horrendous injury at the bottom of this post, where he pretty much tore everything there is to tear in his knee. After watching that video, its amazing to me that the guy is even walking, much less playing basketball, and just unbelievable that he's made it all the way back to the NBA Level.

He made his first attempt at getting back into the NBA earlier this season, and actually made it for a few games with the Miami Heat before they decided to cut him loose. When he resurfaced late in the season, it was for the Tulsa 66ers, the D-League affiliate owned by the Oklahoma City Thunder. I did a few live blogs late in the season, covering Tulsa (Thanks to Ryan with the 66ers, and Scott of Ridiculous Upside for making this happen!), just around the time that Livingston was beginning to make an impact on the court for the 66ers, and you can check those out by clicking on the images at the bottom of this article (Lots of Great pictures from the D-League in those as well).

When he joined the 66ers, he joined a team with a lot of players who either didn't seem to know how to play together, or were too selfish to work as a team. Whatever the case, before Livingston joined the team, they struggled for wins and weren't always as competitive as they should have been. When Shaun came in, he immediately made an impact with the way he was able to distribute the ball and get other players involved. It seemed to rub off on the rest of the team, as they finally started to play together, which lead to the 66ers winning more games. By watching him play, it seemed clear to me that he was asked to focus on assisting his teammates instead of trying to score points. It makes sense when you think about what the Thunder lacked all season from the point guard position, a guy capable of double digit assists on a nightly basis. The tremendous court vision and crisp passing ability lead to a lot of assists while with the 66ers, and would likely have been quite a bit higher if some of the other players were able to finish better.

It was his ability to distribute the ball and run the offense that eventually led the Thunder to sign him to a mutli-year contract. Just like with Nenad Krstic, there was likely to be some interest in Livingston during the off season, and by signing him before the season ended, it cut out any chances of other teams trying to bring him into their organizations. It is also a pretty low risk / high reward signing, and if he doesn't work out or if he re-injures the knee, they likely won't lose much as his contract is sure to be pretty minimal and filled with protections for the team due to his previous injury. Of course that's all speculation since the details of his contract haven't been released. On the flip side, if he continues to improve and gain confidence in his knee, he could end up being the steal of the season, should he be able to play at a level he was expected to all those years ago.

The biggest surprise once he joined the Thunder was his shooting ability. He is said to have a pretty erratic jump shot and an inconsistent passing ability. Those are two things we didn't see much of during his short stint with the team. He was able to run the offense and distribute the ball well during the times he was running the point. He also showed signs of being on his way back by penetrating the lane and dishing the ball to create for his teammates. One game in particular he drove the lane and spun right by the defender before passing the ball to a teammate for an easy score. I remember thinking at the time, if this is a sign of things to come, we may have a true starting point guard on our hands.

His future with the team is definitely dependent entirely upon his progression as he continues to re-tool his game post-injury. At 6'7" he has unique length for a point guard, and uses that well to deflect and block a good number of shots. If that knee holds up, and if he eventually is able to become the player everyone thought he would be, he could definitely wind up being the point guard of the future. Of course he'll have plenty of competition with Russell Westbrook running the point for the Thunder currently (although its easy enough to slide him back to his natural position of shooting guard). Then there is that another scenario on the horizon if the Thunder happen to draft the point guard many (including me) are drooling over, Ricky Rubio, the 18 year old from Spain who recently declared for the 2009 NBA Draft. So far, we've seen nothing but positive from Shaun, and I look forward to watching him during the summer and next season.