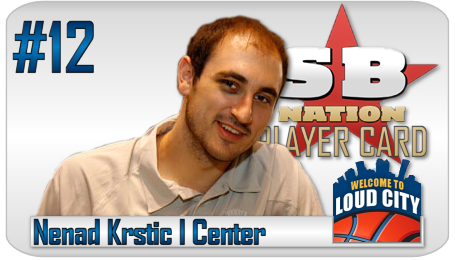 In one of the more unpredictable roster moves this season, Sam Presti decided to get a jump on the rest of the league by signing Nenad Krstic to a free agent contract during the middle of the season. The Thunder felt that he was well on his way to returning to his pre-injury form (2006), and if they waited until this summers free agent signing period, they might find themselves in a bidding war. Sometimes it pays to be in a rebuilding mode, because bringing in a guy who isn't quite all the way back to form, isn't going to hurt your team in the long run, and you get a guy that might not have chosen Oklahoma City as his new home. Krstic was playing overseas as he attempted to rebuild his career after an injury derailed a promising NBA career several years ago. Before the injury he was well on his way to having the best season of his NBA Career. He was averaging 16.4 points per game (while shooting 52.6% from the field), to go with 7 rebounds, 2 assists, and nearly 1 block per game. Those are pretty stout numbers, and if he's on his way back to that kind of production, we'll look back on his signing as a bargain.

Evaluating Krstic for this season is a little difficult considering that I don't believe we ever really got to see him in his true form. I think over the course of the upcoming season, you will really start to see him make strides, and his production should go up. The more time he gets with his teammates over the summer and during the course of next season, he should just keep getting better and better until he's back at the level he was before the injury. The NBA game is vastly different than it is overseas and I think it took the half of the season he was here to re-adjust himself and re-acclimate his body for the NBA game. With an entire summer to work on his game and prepare for an NBA season, he should be able to make strides and improve over what we saw this season.
That's not to say he had a bad season either, truthfully, its about what I would expect for someone joining the team mid-season from an entirely different league, and style of basketball. He actually had his best year ever in terms of blocking shots, which was an average of more than 1 per game for the first time in his NBA Career. For a team that puts such a high focus on defense while trying to build this team, those blocked shots from our starting center, are definitely a step forward. He shot a solid 46.9% from the field, but that's quite a bit lower than he was shooting when he was with the Nets, about 5 points lower. One of his better qualities as a seven foot center is his outside jump shot, and part of that lower shooting percentage can be attributed to his inconsistency in that outside shot as the season wore on. If he can shore up that shot during the summer, he could potentially add 5-6 more points per game, and really be on his way toward becoming the player he was a few years ago.
While his improvement in blocked shots was nice (if even just a few tenths better), his rebounding production was not. He did average a solid 5.5 rebounds, but that was 1.3 rebounds per game lower than he was averaging several years ago. That could be a problem being as he was never a dominate rebounder anyway. He's got the size, but has never really been all that physical down low, he's much more of a finesse guy who is going to open up the court by pulling opposing centers away from the basket on the offensive end. That takes us back to that inconsistent outside jumpshot he used to be so good at. If he can get that working better, it'll open up more rebound opportunities for his teammates on the offensive glass. So just because he doesn't average near double digit rebounds per game, doesn't mean he isn't capable of helping create even more rebounds for his team than the numbers would have you believe.
As this team continues to rebuild, he in conjunction with Nick Collison form a formidable tag team in the middle. We may not have anybody who can dominate down low like we would like, but if we don't add another center in the off season, these two guys should be able to hold down the middle for at least another year, or two. If that happens to be the case, it will also give Krstic the opportunity to grow back into the kind of player he used to be. Should that happen, the Thunder may look more toward grooming a young center as opposed to trying to find an immediate veteran replacement (as the attempted earlier this season with the trade for Tyson Chandler).
So far, I liked what we saw out of Krstic, especially when some of the more prominent scorers on the team went down. He stepped up and showed he is capable of scoring more points and taking on a heavier work load should they need him to. With a full summer and camp with the team, I would expect him to enter next season better than he finished this season. Throughout the course of next season, I expect him to continue to improve and inch closer toward becoming the player he was just a few short years ago. Although cautiously, I am optimistic about his future with the Thunder.