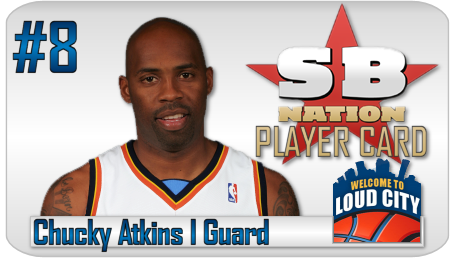 So Chucky Atkins is yet another player who finished the season on the Thunder roster, but was not there to start the season. He was acquired from Denver, along with a Nuggets first round draft pick, in exchange for Johan Petro in early January. It happened so long ago, that we covered it on our independant blog (don't worry, we transferred all of our content to this site so you can easily see the post), several weeks before making the big jump to the SBNation and creating the site you know today, WTLC. We didn't know it at the time, but this trade eventually lead to the Thunder acquiring Thabo Sefolosha shortly before the trade deadline. Thabo was traded to Oklahoma City in exchange for the worst of the Thunder first round pick stockpile, which the Thunder could easily afford, thanks to the Atkins deal. As an added bonus, Chucky was supposed to add a much needed threat from behind the arc, but did that ever really happen?

So did it translate into him helping us out from behind the arc? No, no it didn't. In fact, Chucky had the worst three point shooting percentage of his entire career, this season. 2009 marked the first time in his NBA Career that he shot under 30% from behind the arc, and although he was hovering around 30 with the Nuggets, it went down slightly after joining the Thunder. Despite his poor outside shooting, his points per game did increase by nearly double from his time with the Nuggets, which was 1.9, to nearly 4 points per game during his time in Oklahoma City. While the increased production in scoring is something that is nice to see, his slight decrease in assists was not, especially when it was only about 2 assists per game while in Denver.
His real value to the team was ultimately that he made Earl Watson expendable. As Chucky began to eat into Earl's playing time, it was pretty clear that the Thunder were becoming more comfortable with the idea of keeping a guy like Chucky for another year as opposed to Earl Watson. A big reason for this was the move of Russell Westbrook from Shooting guard to point guard, which made Earl Watson's bloated 6 million plus salary a bit expensive for a guy that was going to ride the bench. For half the price you get a guy that can put in enough minutes to spell Westbrook, and be productive without having to worry about getting him more minutes. Chucky is a veteran who has been in the league a long time and can produce equally with 5 minutes or 25 minutes.
As long as he is on the Thunder roster, Earl Watson will likely be shopped around the league as his expiring contract next year will be highly coveted by many teams looking to clear room for the free agent bonanza in 2010. But after the Thunder signed Shaun Livingston to a multi-year deal, Chucky found himself in much the same position as Earl. He also has an expiring contract next season, and for teams looking to save money, he could be a hot target. I honestly wouldn't be surprised if either Earl Watson, Chucky Atkins, or both got traded before next season starts.
At the same time, I wouldn't be surprised if they decide to keep Chucky around because of his smaller salary so they will have a guy who can come off the bench just to spell Westbrook. This would allow the Thunder to let Russ continue to grow at the point guard position by giving him as many minutes as he can handle while not worrying about giving others playing time. Such a case would be if they decided to ship Atkins and Watson and keep Weaver at the NBA Level. By keeping Atkins, they would be able to designate Kyle Weaver for assignment in the D-League with the Tulsa 66ers, which would result in him getting a ton more minutes than he'd be able to get with the Thunder. So there are pros to keeping him, but in the end, if he isn't in a Thunder uniform to start next season, its no big loss.