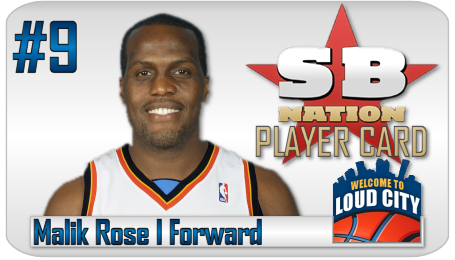 Today's end of season evaluation brings us to another Thunder player who came to Oklahoma City just before the trade deadline, Malik Rose. Probably the best thing about the deal was that the Thunder were able to rid themselves of what some people were calling a "cancer" in the locker room, Chris "Weezy" Wilcox. The trade allowed the Thunder to get rid of Wilcox while still keeping an expiring contract. But one thing I don't think many Thunder fans were counting on after hearing the trade, is that he would actually be able to make an impact on the court. I guess he is, after all, that prototypical Sam Presti type of player, and we probably should have expected him to be a positive influence on this young team. But did he make enough of a good impression to be brought back for next season?

In short answer, no. It's not that he didn't do everything he was asked, its more a matter of dollars and cents, or in this case, common sense. Malik Rose made over 7 Million this past season, and if that sounds a bit off, well, Kevin Durant only made a little under 5 million. Although I'm not really sure what kind of a contract he is looking for at this point in his career, in my opinion, even the league minimum salary for an NBA player of his tenure is too much for what he's going to bring to the court. His real value of course will be more in being a mentor to the young players, and working with them as sort of a player coach, passing on some of the knowledge he has acquired over the course of his long NBA Career.
Since he joined the Thunder, he became a bit more productive than he was in New York, of course, he was getting more playing time to do it. He finished up his short tenure with the Thunder averaging 5 points, and 3 rebounds per game. Let's face it, compared to what we were all expecting, or at least what I was expecting, that's pretty damn good. That said, I don't think he'd been able to do that without the increased playing time he was receiving. Both of those totals were more than double what he was putting up throughout the year in New York. Again, playing time makes all the difference in the world.

So far, he's definitely the hardest guy for me to evaluate because he wasn't on the roster all that long, and didn't make much of a real impact. At least not in the same way that Thabo seemingly did. Nothing really stood out to me as far as his game other than every time he got in the game, I was like, oh hey, they're actually playing Rose. From the moment the trade happened, it was clear to me that the only real reason the trade was made was to get rid of Wilcox.

I really just don't see what the point would be in bringing him back. I mean sure, he's a great guy and all, but seriously, if you are wanting to re-sign a veteran guy, I'd put D-Mase at the top of that list. Other than that, I'm all about letting these young guys get on the court and gain that experience that's going to allow them all to develop into a contender in seasons to come. Maybe I'm way off base here, but I just don't think he has anything left in the tank to deliver on the court anymore. I certainly wish him all the best with whatever team picks him up, I just don't think it should be the Thunder.