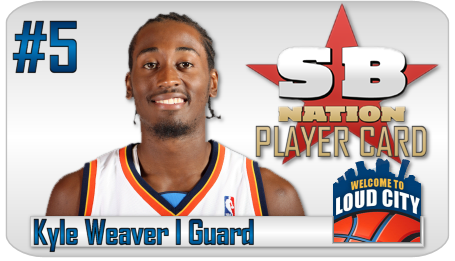 Day 5 of our end of season evaluations brings us to another rookie, this time, shooting guard Kyle Weaver. Sometimes its easy to forget just how young this team is, but in 5 evaluations so far, 3 of them have been rookies. Over the course of the season Kyle was able to not only work his way into the rotation, but after the injury to Desmond Mason (...and before the acquisition of Thabo Sefolosha), worked his way into the starting lineup and was giving solid minutes for the Thunder at the shooting guard position. He is another one of those guys who was brought into the organization for his defensive prowess, and at times this season, was able to show that ability off. Even more surprising were the few times he put in some really quite solid offensive numbers as well. At the pro level, he isn't expected to be a big time scorer, but more of a stiff defender and role player.

Interestingly enough, Kyle is another rookie that was not drafted by the Thunder (then Sonics), but was acquired in a late August trade with the Bobcats, for a 2nd round pick, after spending the majority of the summer on the Charlotte Bobcats roster. It's just another example of Sam Presti doing an excellent job of finding the kind of players he wants to help build this team with, and getting them without ever giving up too much in return. He has a knack for working deals that always seem to tip the scales toward our favor versus whoever the deal is made with. At 6'6" and being a defensive player, he just fits that mold that Presti is looking for.
In a little over 50 games this season, he averaged just over 5 points, 2 rebounds, 2 assists, and nearly 1 steal per game. Looking at those numbers, you can definitely tell that his time on the court was primarily for his defense, and not offense. Although he showed signs of being a decent defender, he still has a long way to go before he's considered a solid defender at the NBA level. The difference between when he started and when Thabo began starting was night and day as far as the overall defensive effort was concerned. But you can't really blame that on Kyle, being as he is just a rookie learning the NBA game on the job, and Thabo already has a few years under his belt as a budding defensive player.
As far as his offense is concerned, his shooting percentages weren't all that bad. 45% from the field, and near 35% from behind the arc. For a team that struggles from behind the three point arc, if he can develop into a consistent three point threat, he could definitely find himself a long term spot on the roster. He's really in kind of that same boat as Thabo, where his primary function for this team would be as a stiff defender, but if he could develop his 3 point shot into a consistent threat, it would be hard to keep him off the court. That's if he can develop into that same shut down defensive player in the NBA, that he was in College. To do that, he'll need playing time, and for playing time, he may need to spend the majority of next season in the D-League.

Just like D.J. White, his role next season will likely be determined by the moves the team makes during the off-season. After the Thunder signed Shaun Livingston to a mutli-year deal, it became a little more likely that Kyle will spend a good amount of his time next season in the D-League with the Tulsa 66ers. But whether or not that really happens depends on how well he plays in the Summer league, and who the Thunder decide to keep around, or trade. Both Chucky Atkins and Earl Watson are under contract through next season, and if they both somehow make it through the summer along with Livingston, then Kyle will definitely start the year playing for the Tulsa 66ers. Some of these young guys role with the team next season is really hard to evaluate before any off-season moves have been made because they really don't have a clear and defined role with the team yet, outside of gaining experience and improving their game.
Overall though, I don't think you can really complain about the year Kyle had. He was the 38th pick overall in the draft and he played in nearly 60 games that he contributed in some form or another. Even if he does get designated for assignment in Tulsa, don't think that he is out of the Thunder's future plans. First and second year players are able to be moved back and forth to the D-League up to 3 times per year as they attempt to develop themselves into everyday NBA players. So if they move him to the 66ers next year, its more so he can get loads of playing time and work on developing his game. Two things that would be hard for him to do while battling other veteran players for playing time. Again though, it just depends on what other guards are on the roster when next season rolls around.