The Oklahoma City Thunder have another day off today before taking on the Portand Trail Blazers, at the Ford Center, on Friday night. So, before we get to the actual game preview tomorrow morning, I thought it would be fun to throw out a peace offering to the wildly fun members over at Blazers Edge. When I made the move to SBNation, it wasn't much more than a week before the Thunder had a matchup with the Blazers, and I found out rather quickly that "Blazers Edge" has fans that will travel. WTLC saw traffic spikes that over two months later, hold up as some of the most traffic'd days in our short history. I look forward to the game tomorrow night, and all the Bedge fans making their way over to read our game preview, and get a little perspective from the enemy, as well as those who join our Live Game Commenting thread in addition to their own. In honor of this new rivalry, I've created a small peace offering, in the form of a wallpaper for the great fans over at the Bedge. Check out the full post to see the wallpaper. I've included several sizes.

You can see what it looks like below, but that image is not Full Size.

To Download Full Sized Wallpapers Use the Links Below 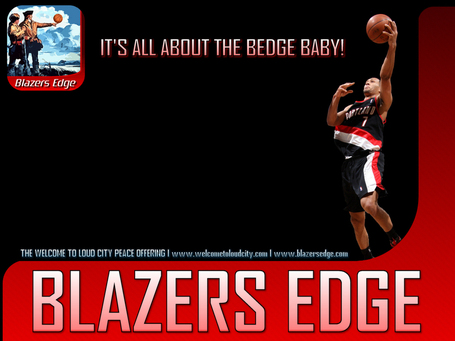