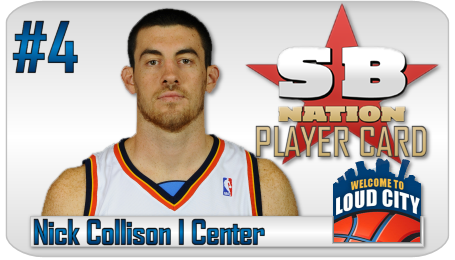 We're rolling right along through our end of season evaluations, and today brings us to Nick Collison. Nick probably doesn't get nearly as much love as he really deserves out there in the world for the way that he approaches the game. I've often used the term "Garbage Man" as a nickname for Nick because of way he plays on the court. He's an unselfish player who seems content to be the cleanup man down low and willing to do the dirty work against any opponent big man that gets thrown his direction.  At 6'10" and 255 pounds, he's probably more apt to play the position of power forward, but on a team that is devoid of a true starting center, he does as asked and was most often playing the 5 position this season instead of his natural position of power forward. You could still see him playing the 4 as well,  at times when Brooks threw both Collison and Krstic out on the floor at the same time. He's a quiet veteran guy who the young players can look up to for his unselfishness on the court and positive attitude about being a role player, which he's made a career of.

Although not a dominant inside player, Nick was asked to take on the role of starting center for most of the year. The addition of Krstic mid-season eventually gave way to him coming off the bench, as Nenad eventually worked his way into a starting role at the center position. Down the stretch, the duo of Krstic and Collison became a formidable tag team, that was seemingly capable of combining for 20 points and 10+ rebounds each and every night. So although the Thunder didn't have that dominate guy down low this season, they found something in these two guys, that was able provide solid production from the center position. They bring very different styles of game to the table, so when one came off the court, opposing teams would have to adjust, and by the time they could make those adjustments, they swapped again, and then they had to deal with adjusting all over again. Perhaps that played a role in the production we finally started to see late in the year.

It may not be the long term solution for the Thunder, but while the Thunder are still rebuilding and growing with a bunch of young, up and coming players, having a couple of tried and true veterans playing the Center position is hardly a weakness. Neither one may be able to provide all of those dominate center qualities you always hope for, and that some teams are lucky enough to have, but they do provide a nice versatility for Brooks to work with. They could also be two very good mentors for a young center trying to make his own way in the NBA, and I'm talking about Hasheem Thabeet, the 7'3" Center from Uconn, who declared recently for the NBA Draft. The reason I mention him is because outside of Blake Griffin, he seems to be the consensus pick out there that many people expect the Thunder to take. While its still too early to suggest who we might go after in the draft, if the Thunder were to grab Thabeet, he'd have a couple of veteran guys to teach him all aspects of the game.

The thing you have to like most about Nick is that he is a hustler, a grinder, and a banger. He may not be the biggest body out there, but he's going to play as physical a game down low as he is capable of. If you watch a lot of Thunder games, chances are that you've seen him diving across the floor for loose balls with total disregard for the consequences to his own body. The kind of basketball he plays allows him to be productive on a very quiet scale. It seems like nearly every game you don't really notice how effective he is being, and then you check the box score and he's got double digit scoring and near double digit rebounding totals. With a young team that misses a lot of shots, he's that guy who seems to always be there to clean it up and finish with the easy two points, or grab that tough offensive board and kick it back out the point guard to set up another play.

For the season he averaged 8 points, 7 boards, and nearly 1 steal and 1 block per game. Those aren't exactly eye popping numbers, but again, they are very right on with what you would expect him to get, simply by cleaning up the mess left by other players. If you need more evidence of that, just look at his 2.5 average of offensive rebounds per game. Right there, most times, turns into 4-6 points on high percentage put backs. For the season he's averaged 57% shooting from the field, which shows he's smart about the shots he does take, and if you watched him throughout the season, you know those aren't all high percentage shots as he also likes knocking down shots near either side of the top of the key, should he happen to get the ball kicked out to him.

Overall, he had a solid season, and did what was expected of him. On a team that continues to get younger and younger, as I believe it will do this off season, with guys like Malik Rose and Desmond Mason likely not being brought back, his veteran leadership and experience will become even more valuable to the organization. I don't know if he's a guy a lot of the young players can relate to off the court, but when it comes to his play on the court, he does things that young players can learn from and incorporate into their own game. As more of the other veterans go away, he's going to be asked to take a much larger mentoring role, and whether that is something he wants to/is capable of doing, remains to be seen. But the bottom line on Collison is this, he's going to do whatever is asked of him, and he's going to do it with 100% effort, each and every time. Especially in this league, those are qualities that will keep you around for awhile.