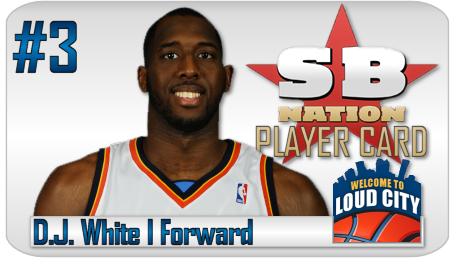 Our end of season evaluations continue tonight with Rookie D.J. White. D.J. was a bit of a disappointment this season, but only in the sense that we didn't get to see as much of D.J. on the court as we would have liked to. Reason being of course was the multiple surgeries D.J. underwent to remove a benign growth in his jaw. His initial surgery took place in October, and he then had an additional surgery in early January. By the time he finally made it on to the court, it was nearly the end of March, and it was for the Tulsa 66ers, not the Oklahoma City Thunder. I did a Live Blog from the Tulsa 66ers during the game that D.J. made his home debut, and in case you missed it, just click that link. Shaun Livingston was also playing in Tulsa at the time, and I snapped some photos of both of them during the game, so you can see those there too. It's not like D-League photos of NBA players are exactly easy to find either, so if you want to see something that you most likely won't see anywhere else, then click the link and take a peek.

Unless you were following the Sonics, you might also not realize that although D.J. White is a rookie and playing for Oklahoma City, he wasn't drafted by the Thunder (Then Sonics). He was actually drafted 29th overall by the Detroit Pistons and traded not much more than five minutes after that for the Sonics 32nd and 46th picks during the second round of the same draft. The Sonics had so many 2nd round picks that they still had a number 50 overall pick left to select DeVon Hardin who along with the #24 overall pick Serge Ibaka could surface for the Thunder during Summer league. So if you're watching a game sometime next season and they do a text to win asking what team originally drafted D.J. White, you will know, it was the Detroit Pistons.
Because of his late start, its kind of hard to evaluate DJ, but in the games he did play, he showed an ability to score in the post and as well as by rolling away from defenders and knocking down the 15 foot jump shot. His jump shot is probably the thing that impressed me the most during the short time he did play, but on this team, that's probably not the most important thing for a post player to do. On this team, rebounding and defense is much more important, especially in the painted area because of how many other offensive weapons the Thunder have. Don't get me wrong, its nice to have a guy who can score under the basket and back out to 15 feet, but more importantly we need a big body who is going to get in there bang around opponents big men as well. At 6'9" and 251 pounds, he's definitely got the body to do it, only question is, will he?
So far its hard to tell, but if you take a look at his stats, which were averaged off of 18 minutes per game and extend them out to say 36 (which is solid time for a starter), his stats would be pretty productive. So take his 9 points, 5 rebounds, .71 blocks, .43 steals and double them as if he'd be equally productive in 36 minutes and you would have 18 points, 10 rebounds, 1-2 blocks, and about a steal. That's pretty productive, especially for a team that struggles for an identity in the paint.  The downside at looking at his stats is that they also came at a time when the Thunder season was long over (in terms of playing meaningful games) and they were specifically looking at players and evaluating them before heading into the summer. So he had the advantage of game plans that included getting him involved whereas during the year, perhaps he wouldn't have gotten such treatment.
All that said, he showed some potential, even though he never really seemed to be in full time game playing shape. Rightly so after two surgeries and not being cleared to play basketball for nearly the entire season. He will definitely benefit from another summer and playing time in the Summer Leagues. If he can develop more of a presence on the glass and show head coach Scott Brooks why he was named last years Big 10 Player of the year, he could see some solid playing time next season. In all honesty, if he can be more productive on the glass, and come with a strong defensive mentality, he might make a better starting power forward than Jeff Green. Now, don't go twisting what I mean when I say that, I love Uncle Jeff as much as anyone else, but there is such a thing as having too much offense and not enough defense on the court. If White could turn that big body into a defensive battering ram, it might be more beneficial for him to start. Then you could bring Green off the bench for that much needed offensive burst that the Thunder so often lacked during long scoring lulls this season.
His place on this team's future is definitely up in the air when you think about guys like Serge Ibaka, and DeVon Hardin fighting for a roster spot. Then he also has to deal with any off season trades or free agent players that Sam Presti is able to bring in. And that's not even mentioning if the Thunder somehow manage to pull Blake Griffin out of this years draft, and if they are able to do so while keeping Jeff Green. But so far, so good, in terms of his play on the court, but what he does this summer will ultimately determine his role next year on this team, and if he can work his way into the rotation. If he does manage to do that, while essentially still being a rookie next year, he'll have pressure on him to perform better than a rookie with all these other guys potentially breathing down his neck. Its really hard to gauge his future with this team though before any off season moves and the NBA Draft have taken place.