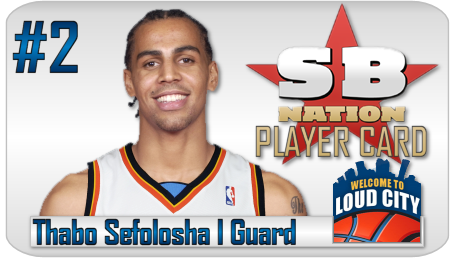 Day 2 of our end of season evaluations brings us to #2 Thabo Sefolosha. Obviously Thabo is a guy who wasn't on this team to start the season, so our evaluation will be from the time Oklahoma City acquired him, through the end of the season. Essentially, we're going to give an evaluation of his time with the Thunder and not his overall entire season.  Sefolosha joined the team just before the trade deadline at a time when Thunder fans were still in shock over getting Tyson Chandler in a deal with New Orleans, and then subsequently having that trade rescinded by the Thunder, after Chandler failed his physical. The Thunder gave up the worst of their many first round picks to acquire Thabo. With the impact he made on this team defensively, it turned out to be a really terrific deal. Sam Presti found another diamond in the rough and was able to buy that diamond for a bargain price.

Before Thabo joined this team, the Thunder really didn't have much of an identity on the defensive end of the court. He immediately came in and made an impact on this team. From the first time he stepped on the floor, he began to rub off on his fellow players. His work ethic and his tenacious defensive mentality became contagious and for the first time all year, the Thunder were showing opponents that they could play defense too. Just how big of an impact did he make? In just about two full months with the team, the Thunder won 10 games, compared to just 13 in three and a half months before his arrival. Of course he didn't do it all by himself as other moves were made before the deadline to help create a more cohesive and like minded locker room. More than any other roster move made this season, the move to bring in Thabo changed this team for the better.

The stat total above is from the entire season, and doesn't really do him justice for the games he played with Oklahoma City. For instance, take the entire month of February for example, Thabo averaged near 10 points, 5 rebounds, between 2 and 3 assists, 2 steals, and a block and a half per game. Oh and the best stat during that time period? 7 Wins (8 if you include February 28). Those stats are definitely quite improved over the entire season stats you see above. His stats began to trail off a bit as the Thunder began to evaluate other players like Atkins, and Livingston, to help give the front office a better picture of what they wanted to do this summer.  But, before that, during his time as the full time starting shooting guard, he put up some really solid numbers and helped this team win games.

If you want to know just what kind of player the guy is, you can go back to the last game he played this season. If you are a Thunder fan, there is a good chance you saw this game, as it was the final home game of the season, against the Charlotte Bobcats. During this game Thabo dislocated his finger while diving on the floor for a loose ball. That was just one example of the sacrifice he's willing to make to help his team win. He'll do whatever it takes, be it play tenacious in your face defense for 40+ minutes, or diving on the floor in traffic with total disregard for his own body to save a possession for his team. That's just the kind of player he is, and as a fan, you can't help but love a guy who plays the game like that. Truly unselfish.

He's definitely earned a spot on the roster as this team makes its progression forward, but one has to wonder what other effects it will have on the rest of the roster. Will Presti still want to bring back Desmond Mason when they essentially replaced him with a younger and better player to do what they were asking Desmond to do? My gut would say probably not, but since he is such a fan favorite and a local boy, it'd be hard not to attempt re-signing him. But with Thabo on the roster, do we really need to waste a roster spot on Mason? I hate to say it, but probably not. Also, often times this season, the team's biggest weakness in the starting lineup was said to be at the center and shooting guard positions. These are the two positions that the Thunder were likely to look at filling through trades (Remember Tyson Chandler?), or through the draft. But with Sefolosha in place, will Presti focus on shoring up the middle before looking for a long term starter at shooting guard? Time will tell.

For now though, the Thunder have found a truly unselfish, defensive minded, player to help this team grow on the defensive end of the court. He's a great character guy, and another piece to the puzzle that could be in contention for the playoffs next year, and for championships down the road. I like him as the starting shooting guard next season (unless something changes), and then moving to a contributing role player off the bench in seasons down the road. That is, unless he makes improvements to his game on the offensive end, which would make it hard to take him out of that starting rotation. At 25, he's still young enough to develop an offensive game if he focuses as hard on improving as he does playing defense. If he can develop an outside shot, it would prove to be invaluable on a team that struggles from behind the arc.