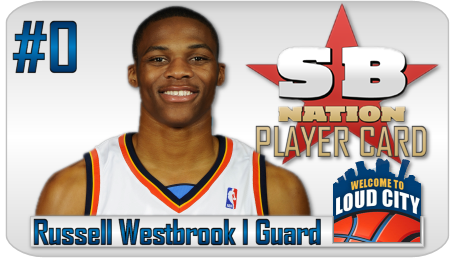 Since we have a little time to kill before the 2009 NBA Draft Lottery selection, I figured we could use that time to take a look back at each player and evaluate them for the 2008-09 Season. Of course we'll still keep you updated on any other team news that pops up between here and there, but over the next few weeks, I'm hoping to take a look at each player who finished the season on the Oklahoma City Thunder roster, and evaluate their performance this season. As always, I'm going to be as honest as possible, and if you disagree with any assessment of any player, I encourage you to post your comments. If you feel so strongly that it warrants its own post, please feel free to make a fanpost, you never know, it could end up on the front page if you write a quality post. Now thats out of the way, first up, #0 Russell Westbrook.

A quick look at Russell's stat line above will tell you one very obvious thing, RW0 had a very productive rookie season. Russ played in all 82 games and averaged near 15 points, 5 rebounds,  5 assists, and 1 steal per game. Over the course of an 82 game season, especially for a rookie learning a new position on the job, that's called getting it done. Even still, many will make the argument that he didn't do all the things you want your starting point guard to do, but I also think a lot of people forget, Russell is just now learning to play the position of point guard, and he's doing it at the NBA level, as a rookie. When you look at it like that, its actually kind of scary, if you are not a Thunder fan that is, because if he can build on this season over the next couple of years, he could end up being one of the best point guards in the entire league.
The thing I have been impressed with most this season from RW0 is his explosiveness, and while its probably not the first thing you look for in your starting point guard, its certainly not a bad thing to have, especially if he can develop the other aspects of his game. I can't even tell you how many times I saw Russ take the ball to the hoop through traffic or right by a tough defender and make it look easy. However, there were also times when he did the same thing, but got bogged down deep in the paint and struggled to find a way out. If he can learn how to distribute the ball effectively to an open teammate before getting bogged down, his assists totals will immediately go up. You have to pay so much attention when he attempts to go to the rack that it surely will open someone up on the wing to knock down a jumper.
As a scorer, he does have some work to do in the jump shot department, and even more so from behind the arc. He's definitely a streaky shooter, who at times has a spot on jump shot, and then has other times when he can't make a bucket unless he's slamming it home. He just needs to work on being more consistent when taking shots outside the paint. From behind the arc he was pretty terrible over the course of the season shooting just 27%. Its always nice to a have a point guard who can also knock down those pressure buckets from downtown late in the half, game, and especially overtime. Right now, he's just not that guy, and may never be, but that doesn't mean he can't work on improving his shooting.
Rebounding is another thing that you just don't look for much when thinking about a point guard, but Russell has shown an uncanny ability to get in there with the tree's (as Brian Davis and Grant Long like to say) and mix it up. You'll see both teams forwards and centers in the middle preparing for a rebound and seemingly out of nowhere, here comes Westbrook with the board. I seriously don't know how he does it, he gets in there and grabs the ball in situations he's just got no business being in, and you have to love that. He's substantially undersized to be attempting rebounds against guys approaching seven feet tall, but he is able somehow get away with it on a consistent basis.
On the flip side, his defense is a big reason why he was drafted as high as he was. During his rookie season he's shown flashes of brilliance, but also signs that he is, indeed, still a rookie. His defense was definitely better than opening day starter Earl Watson, but I think everyone can agree, that's not saying much. Truth be told, I didn't think he had as good a season defensively as I thought he'd have based on his defensive hype level going into the season. At the same time, you have to consider that playing defense against a point guard is quite a bit different than playing defense against a shooting guard, and he is still learning the position of point guard both offensively and defensively. By no means did he have a bad year defensively, but definitely has some room to progress along with the rest of his game.
Overall, you have to be more than satisfied with the effort and enthusiasm that Russell has shown over the course of the season. He seemingly always has a smile on his face and seems to be having more fun than anyone else on the court. That's all well and good, but he's able to take those great qualities and turn them into solid performance on the court, and thats when you know you have something special. I fully expect him to return next season as the starting point guard and continue his maturation and progression at the position. He may not get as much love as other rookies around the league when it comes to Rookie of the Year consideration, but if you ask any Thunder fan who the best rookie in the league was this year, there is only one answer. RW0!