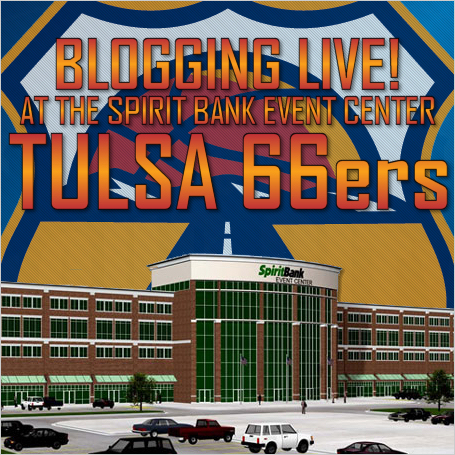 In an effort to bring you more coverage about our D-League boys from Tulsa, thanks to Scott over at Ridiculous Upside, and Ryan with the Tulsa 66ers, I'll be doing a Live Blog from the game today, and for 5 total games the remainder of the season. A lot of Thunder fans are from/live in or around the Tulsa area (Like Myself) and may not know  just how great (...and affordable) it is to go down and check out the Tulsa 66ers. You can expect not only updates on the game, but some general comments about the atmostphere as well as pictures to go along with that. Hope you guys enjoy the coverage, and check back often. Live updates will come at a clip of once every fifteen minutes (give or take).

With all that said, Pictures will be at the bottom, and the live updates fill in throughout the game below this and above the pics. Hope you guys enjoy!

...Well, I'm having a few difficulties with Wi-Fi here so far, so this may be a little touch and go. I'll do my best to stay on top of it and keep it working. The biggest headache has been trying to upload photos to this post, so maybe I can keep it working if I don't mess with photos. Either way, I'll do my best to bring you updates on time every 15 minutes as long as everything goes smoothly connection wise. It seems to be working solid now.

Both teams are finishing up warmups, and the modest afternoon crowd has begun to settle into their seats. I was hoping to have time to give you a bit of a preview, but due to the technical difficulties, I've run out of time. I'm going to do this rapid fire style, so here we go...

After the Vipers won the tip and quickly turned the ball over, Shaun Livingston got the 66ers out to a quick 2 point lead.

You guys are going to love when the action cam makes it way into the NBA, they were showing it up on the jumbotron here early and it really gives you shots that you just don't get in the NBA right now.

The Vipers went on a quick 7-0 run before Livingston put in another bucket to pull back within 3 points.

Trent Strickland is all over the place offensively for the Vipers so far. He just connected on a couple more free throws to give the Vipers an 11-4 lead here early.

The 66ers just called a much needed timout, trailing 6-17 here with 7 and a half to go in the first. They have got to get a body defensively on Strickland. I'm not sure of his tally, but he has to be in double digit scoring already.

Strickland has 14 (of RGV's 19 total) points here early, and just nabbed himself a nice steal.

Shaun Livingston who was aqcuired yesterday, got the start, and is seeing a lot of playing time here early.

I'm a little dissapointed that I havn't heard any crazy fans heckling the other team. In all fairness, the few games I've been to, that guy is usually me. Kurt Looby just threw down a RIDICULOUS dunk.

The loudest I've heard the crowd all night....as they try to earn a free pizza from a 66er girl.

New 66ers Shaun Livingston lead the way offensively for the 66ers in the first period with 8 points. He scored 6 in 18 minutes last night, his debut with the team. He's making an impact here early for sure.

2nd quarter about to get kicked off now. 66ers get the first possession.

Noticed Ryan Humphrey walking around in a suit with a boot on his foot. This team is already too small inside, without him, its even worse.

Keith Clark just had the living snot blocked out of his shot under the basket...missed who blocked it though. wow.

Sidenote: Before the game, The Vipers head coach was complaining about some of the stat issues last night, and upset some of his guys didn't get their stats recorded properly.

The Vipers really starting to pull away now, 39-21 is the lead.

Kurt Looby has been a blocking machine! Ryan just delivered some stats, and he had 5 blocks in the first.

Keith Clark just dropped in a couple free throws, and has pulled the Sixers back to within 9 points. A nice little run here.

Just a reminder, you can watch this game live at NBA.com/futurecast

As soon as we get a little something going, the Vipers rattled off 6 in a row before Ehambe knocked down a three, and came right back with another score plus 1. Singlehandedly brings the 66ers back to within 10 points. 38-48.

Finally someone in the crowd getting involved yelling at the ref to "WAKE UP!" after a Keith Clark charging foul.

Kurt Looby puts in a bucket to get the Vipers to the half century mark with just under 4 minutes to go in the first half.

Keith Clark with his first big slam of the night. Pulls them back within 10, 43-53

More Photos at the half as well.

Rio Grand Valley just got T'd up AGAIN! I think that's the third one tonight? Could be more. Geez.

That's it for the first half, the 66ers trail by 10, 49-59. Not all that bad considering. The 2nd quarter was filled with mini-runs back and forth, and each time Tulsa pulled to within about five, the Vipers pulled back to near double digits or slightly better.

Did I mention Ryan Humphry got released???

Some Teeny Bopper cheerleader girls just took the court and are doing the Beyonce "Single Ladies" song and dance. Hilarious! The crowd LOVED it.

...They also loved the free T-Shirt toss that followed after.

So at the half, Leading the way for the Vipers has been Trent Strickland with 19 points, although 14 of those came in the first half of the first quarter, and Jawad Williams, with 14 points. As a team, the Vipers have 9, yes NINE blocked shots in the first half. Did I mention how much the 66ers missed having a big man inside? Steven Hill can't make it back soon enough, especially with the Release of Ryan Humphrey.

For the 66ers, Moses Ehambe is leading the way with 16 points, followed by Clark with 9, and Livingston with 9. Tulsa will need to get out to a quick start early, if they hope to have a shot to win the game.

2nd half now Underway. 66ers with the first possession.

Wanna give another shout out to Scott at Ridiculous Upside, and Ryan at the Tulsa 66ers for getting this set up, and also Robert for getting my wifi connection working. You guys are awesome!

Shaun Livingston gets the 66ers first bucket of the 2nd half, but it was preceded and followed by 2 from the Vipers. Lead now to 12.

Keith Clark just picked up his 3rd personal. The last thing we need is Clark to sit for foul trouble.

Kieth Clark just picked up his 4th on a sick blocked dunk. Looked clean to me. Dial replaces Clark. Expect Looby to dominate inside now.

Kurt Looby just got a rebound over 3 66er players...while out of position. Tulsa lack of size really coming into play now.

Derrick Dial knocks down a much needed 3 pointer, cuts the lead back to 13.

Jeremy Kelley with a sick behind the back pass to Gary Forbes for a layup that got goaltended. Cuts the lead to 11.

Kurt Looby again flying in for a rebound he had no business getting...ball goes out of bounds to the Vipers.

Rio Grande Vally outscored Tulsa 6-2 over the last three minutes to improve their lead which is now 18 points.

Earnest Scott just blasted us with a 3, taking their lead to 19 points with just over a minute to play in the 3rd period.

End of the 3rd period, The Vipers have all but locked up the win now, as they will take an 88-70 lead into the final quarter. Anything can still happen though, and the team will hopefully get a boost from Keith Clark who will return to the floor after getting into foul trouble in the 3rd.

Keith Clark is back on the court to start the 4th.

Gary Ervin had the ball swiped then ran upcourt and got it right back with a steal of his own and lead a nice break finishing with a dish to wide open Gary Forbes for the Lay-in.

Just got delivered stats through 3 quarters...Notables: 4 66er players in double digits scoring, Livingston with 13, Clark 10, Forbes 15, and Ehambe with 18. Team blocks still wildly in the Vipers favor 10-2, and they are outrebounding the crap out of us, 46-29.

Gotta hand it to the modest crowd we do have tonight. having seen anybody get up and leave yet.

I'm hearing that Steven Hill could be back in a couple weeks. This team needs a big body inside NOW. The loss of the Hump is already apparent.

Vipers over the century mark with a 102-82 lead, and Clark back at the line to shoot two.

Kurt Looby had 14 rebounds through 3 quarters to go with his 7 points, and 5 blocked shots.

Some dude that looked like he was straight out of the 80s just got rejected on the kiss cam. Hey, we may not be winning, but you can't get much better entertaining than seeing some goofy idiot get rejected on the Kiss cam.

Why do the 66ers Dancers where flesh colored shoes?

Vipers are now up by 29 points, and well on their way to handing the 66ers their worst lost of the season. Previous worst was 20 points (twice).

Keith Clark and Craig Winder just got a double techinical foul. I wonder what the record is for most technical fouls in a D-League game. I have no idea what the total is, but its got to be apporaching double digits.

The 66ers mascot, "Routie" is wired looking bird thing, I'm wondering how that relates to the team aside from his name being "Routie"???

Keith Clark just cut the lead to 25 with a 3 pointer. I'm not positive on his scoring total, but I imagine he's either approaching 20 or has eclisped it now.

Tulsa had a nice "Too little too late" run to close the game, but the final score ended up with Tulsa on the bottom side. Tulsa 66ers 101 Rio Grande Valley 124.

The crowd gave a small cheer in appreciation as the clock ticked down to zero.

Hope you enjoyed the Live Blog Coverage of our D-League boys up in Tulsa. The team is seriously lacking an inside presence, which is now even worse with Ryan Humphry getting released.

This Live Blog has now concluded.

Live Photos from the Game 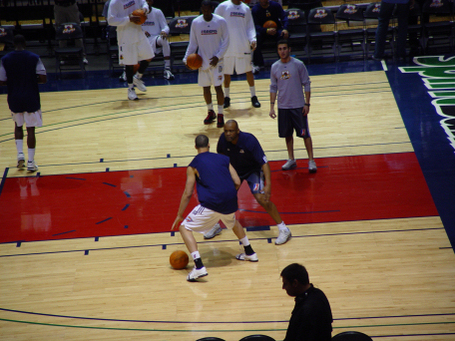 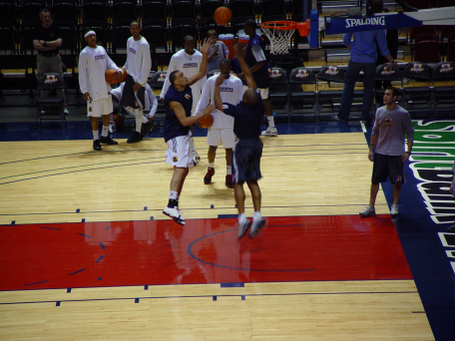 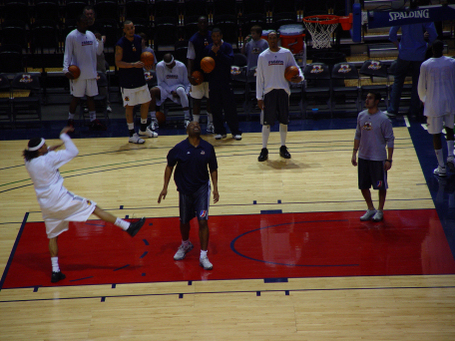 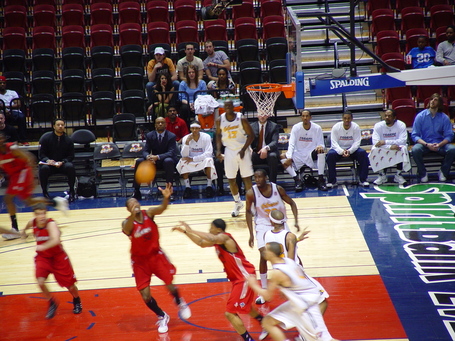 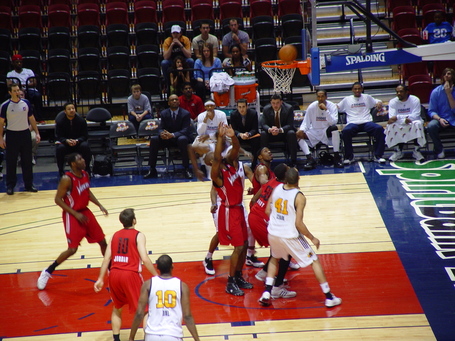 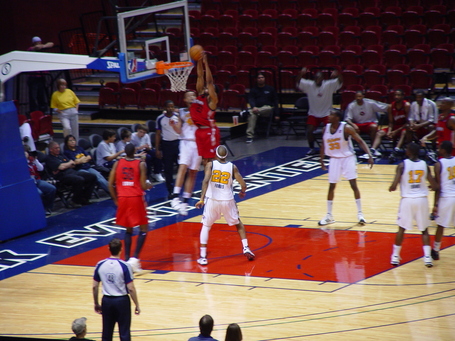 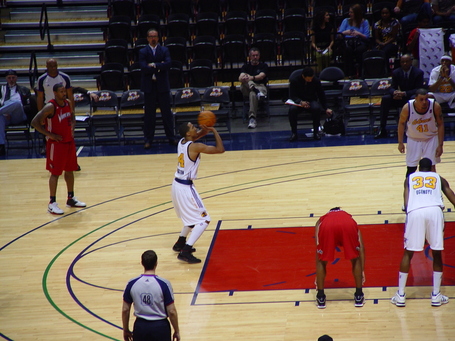 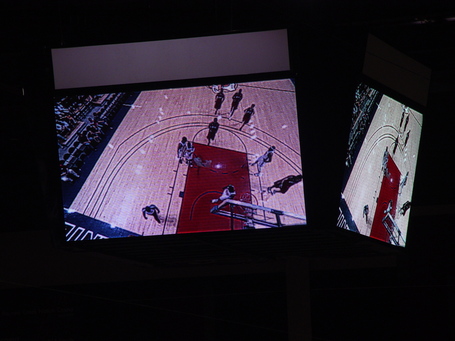 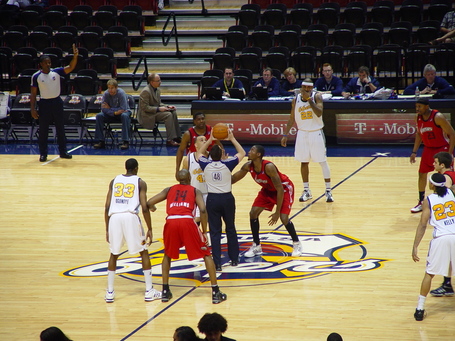