Share All sharing options for: RW(0h!) Rookie of the Month....AGAIN!!! 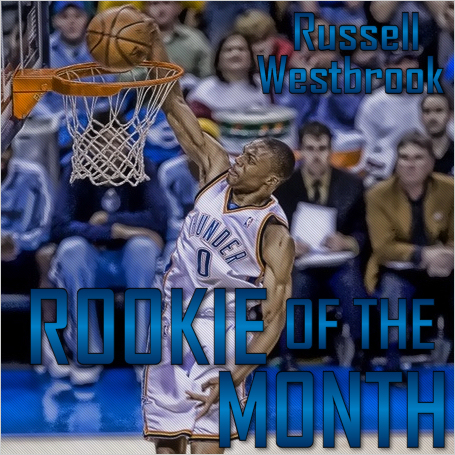 For the 2nd time this season Russell Westbrook was named as Western Conference Rookie of the Month! Its nice to see Russ continuing to get accolades from the league, and some recognition for his terrific play this season. Its not easy to make the switch to point guard, especially in the NBA, but to make the switch, and get two Rookie of the Month honors in a 3 month span? Well, thats insane. Thats our boy. Thats...RW(0h!)

Here is a recap of the month for both Lopez and Westbrook:

Feb. 3 vs. Milwaukee: Recorded 22 points and 12 rebounds, his first of three double-doubles for the month, in a 99-85 win over the Bucks.

Other nominees for the Eastern and Western Conference T-Mobile Rookies of the Month were the Chicago's Derrick Rose, Los Angeles Clippers' Eric Gordon, Memphis' O.J. Mayo, and Miami's Michael Beasley.