Share All sharing options for: Loud City Fan of the Week: Karrie (KarrieD)

It's time for the Loud City fan of the week once again, and this time it brings us our first Lady fan, Karrie! Karrie vowed to never again let herself get attached to another NBA team after the Hornets left, but since the Thunder came to town, she's had a change of heart. She's also been lucky enough to meet one of the newest Thunder players, Thabo Sefolosha, who she thinks was cute, and was happy he was so nice to her kids. Congratulations to Karrie, and thanks so much for being such a great fan, and for supporting the Oklahoma City Thunder! On to the questions...

How did you become a Thunder fan?

Prior to the Hornet's coming to OKC, I wasn't interested in the NBA. But, the first game I attended, I fell in love with the excitement, the thrill and the fun of the game. I knew the minute that it was announced that the Sonics were sold to Clay Bennet that we would have a chance at our own team. I immediately became a fan of whatever team we would have here in OK. I vowed to support this endeavor as I felt it would such a great boom to our state and economy.

Did you have a favorite NBA team before the Thunder? If so, how has the Thunder changed your feelings/allegiance to that team?

I was smitten with the Hornets. I loved that team, and in an effort to overcome my heartbreak over them leaving, I vowed to never again get attached to a team. That was short lived when Clay Bennet (my hero) delivered the Thunder! Now, it's Hornet's who?

What day did you get to select your Season Tickets?

Thursday and I was very bummed about that! Most all of the better seats were long gone. But I overcame my disappointment and was able to buy four seats instead of the original two, so it all worked out.

Are you happy with your seats?

Happy isn't the best word for how I feel about my seats. I feel fortunate to have gotten four seats but I still wish they were a tad closer as I'm blind as a bat and would like to actually see what is happening. A little closer to the court would be ideal.

How do feel about sitting up top in Loud City?

I like the energy, enthusiasm and the panoramic view. Of course, I've secretly wanted to fling a few fans off of the edge of the balcony after they've blocked my panoramic view. I can't tell you how many times people walk up and down the stairs and stop directly in front of me! I've missed seeing quite a few awesome shots because people can't seem to wait two minutes for their nacho fix! I'm ready to sneak in Taco Bell, just for them.

What is your most memorable moment during a game you attended this season?

The Spurs win just floored me. The range of emotions was absolutely killing me at the end of that game! I thought for sure we would Lose with a last second 3 pointer and then we Won! And then they Reviewed! And then we Won! (again) Whew, what a roller coaster ride!

Well we've had a few drunkards shouting indecipherable epithets on occasion. Not sure if they were funny or not as I couldn't understand them! It was humorous watching them try to walk down the flight of stairs without falling into the lowers.

How many games have you attended? Did you ever have any trouble getting rid of tickets for games you couldn't attend?

Well, we managed to hit quite a few games. I'd say 65% of the games. We've sold a few on the Thunder Ticket Exchange and given a lot away to employees and clients. I like to give my tickets to military families when I can. It hasn't been a real problem to give away tickets. Everyone likes a freebie.

Who is your favorite Thunder player? Why?

I just met Sefolosha - not only was he very cute but he was extremely sweet and kind to the kids. Of course, I think he has been a great asset to the team.

Who is your least favorite Thunder player? Why?

I don't really have a least favorite player at the moment.. maybe after our next loss, I might.

Who is your favorite NBA Player? Why?

Chris Paul, because he was so great to watch while he was here in OKC. He is a genuinely nice guy and of course, a stellar player.

Who is your least favorite NBA Player? Why?

Retired Charles Barkley - self explanatory. Okay, he's a hater of OKC, so he is my least favorite ex player - does that count?

How has the game experience changed from the beginning of the season to the end?

Drastically improved. The first few games were disheartening. We couldn't win a game, the production had a lot of bugs to be worked out and I was questioning the amount of money I just spent for this ??? But, now, I love it. We've had quite a few great wins and I see the team and the Thunder organization trying extremely hard to improve in all areas.

What are your thoughts on the new Thunder Mascot Rumble?

He's great! I love the way he engages the crowd - even though he could be a tad intimidating to a tot. At least he doesn't have visible teeth.

Who is your favorite Thunder Girl?

I don't have a favorite 'girl'. Bring on the Chippendales and then we can talk.

What was your favorite half time entertainment?

I actually liked 'Quick Change' ... that was pretty amazing. If only I could change that quickly, we'd make it to the game in time! (But, at least I don't have to sit through the 'Oklahoma' song when I'm late - Yeeow! A-yip-i-o-ee ay!). My least favorite was when the lady almost drowned in her tank! Sure, traumatize the kids for life, why don't you? Thankfully, she lives!

If you were an NBA Player, what position would you play? Why?

'Mopping the floor' position because I'm only 5'4.

Do you think the Thunder will make the Playoffs next season?

Not yet. I'd still give them a year or two.

What do you think of "Welcome to Loud City" and SBNation? What can we do to improve?

Anything else you feel like sharing that wasn't asked?

I honestly feel that the Thunder experience is such a wonderful opportunity for Oklahoma on so many levels. It has enriched the Downtown/Bricktown area and increased profits for all of the restaurants and nightclubs. But, what is most important to me is that it has enabled family and friends to gather, have a meal and drinks before hand, and spend time together at the game. I love taking my family to the games - we're making great memories together! Go Thunder! 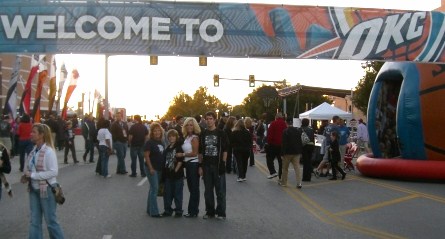 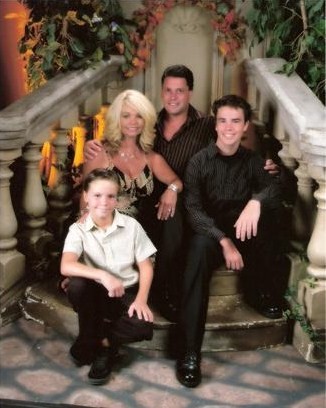 Did you miss a previous episode of Loud City Fan of the Week? Use the Links below.

Have somebody you think is deserving of being the Loud City Fan of the week? Nominate them by sending us an email at welcometoloudcity@gmail.com