Share All sharing options for: Loud City Fan of the Week: Justin (JWil)

Well, its Saturday, and I'm going to make an effort at getting this weekly feature posted on Saturdays from now on. Up this week is JWil, he's a 29 year old Thunder fan who grew up in LA, has a soft spot for the Clippers, and stakes his claim as the guy who wrote in to Kelly Ogle (News 9 OKC) to suggest that they call the team "OKC Thunder and use a buffalo for a mascot." He's a Loud City fan who loves sitting up in Loud City with the rest of us Thunder crazed fans who sit up top and make the Ford Center experience so great. Thanks for taking the time out Justin, and congratulations on being WTLC's Loud City Fan of the Week! Check out the full interview with Justin inside the full post...

How did you become a Thunder fan?

Growing up in Los Angeles, I had an early exposure to professional sports. I went to a bunch of pro baseball, basketball and football games as a kid. When I came to OKC in 1995 I never thought this city would the site of a pro team. Once it was certain that the Sonics were coming here, I was an instant fan of the soon-to-be Thunder. I had season tickets for both years of the Hornets and was ready for a team to be OKC’s and OKC’s alone. And I’m continually amazed and thrilled we have a pro team here.

Did you have a favorite NBA team before the Thunder? If so, how has the Thunder changed your feelings/allegiance to that team?

As I said before, I grew up out west in LA, which means I was a fan of the… Phoenix Suns. I never cared for the Lakers. I was on the Suns bandwagon for the days of Tom Chambers, Charles Barkley, (current Sacramento mayor) Kevin Johnson and my personal favorite, "Thunder" Dan Majerle. I went to a lot of Clippers games too, back when they had Bo Kimble and Danny Manning. When I moved back to Oklahoma, I had a period where I didn’t keep up with the NBA at all. Around 2000 or so, I started to keep up with the Dallas Mavericks and they were sort of the default favorite team until the Hornets came here. Obviously the Thunder is my team now, but of all those teams I mentioned, I still have a soft spot for the Clippers. I know that’s crazy, but I guess I like rooting for the underdog more than the heavy favorite (unless one of my teams grows to become the heavy favorite)!

What day did you get to select your Season Tickets?

I think my day was day two. I knew exactly where I wanted to go. Immediately myself and Kramer (my friend who has a couple of the seats in our package) went to Sec. 328. That was the edge of the $10 seats and at a nice angle to the court between the goal and the Thunder bench.

Are you happy with your seats?

Oh, I absolutely love them. It’s in the third row of LC, so it’s not way up there, but it’s up there enough that you get a good view of both sides of the court. I’ve always enjoyed sitting a little high for sporting events, so I think they’re the best seats in the house. Even if I was a millionaire, sitting way up close just doesn’t appeal to me. In that case, I’d probably get a row of club seats at midcourt.

How do feel about sitting up top in Loud City?

It’s awesome. I sat in the baseline club seats during the two Hornets years, so I kind of had an aloofness going into Loud City. But it really is where the action is in the Ford Center and absolutely is the reason why the Ford is at loud as it is. I’m continually amazed at how loud that place can be, given its size.

What is your most memorable moment during a game you attended this season?

Oh man. There have been plenty of great moments this year, and I hate to use the most recent one because it comes off as lazy, but the win over the Spurs is likely the high point of the home slate for the Thunder. They were down nearly 20 points in the first half, then slowly clawed their way back to compete at the end and find a way to win. The crowd was going berserk toward the end and it was a playoff-like atmosphere.

Oh, it’s probably something I said at some point. I tend to have a bit of a smart mouth.

Nothing I can really pinpoint exactly, but I will say I hate it when a call goes against the Thunder that is a GOOD call and people boo it. Know the rules people! Yes, the NBA has a lot of bad officiating at times, but not always. Sometimes our guys travel, turn it over, etc. Just be basketball smart. For the most part, our fans seem to be, but there are always those that just boo anything that goes against their team, which I find very lame.

How many games have you attended? Did you ever have any trouble getting rid of tickets for games you couldn't attend?

I’ll be honest: life gets in the way of a 41-game NBA schedule. I haven’t kept count exactly, but I believe it’s in the neighborhood of about 25 games, give or take a few. I should be at all of the remaining games, sans the one against Utah on Friday. The last home game is a week before my wedding, actually. By the end of the season, I’ll have probably made about 31 games, so missing 10 isn’t horrible.

Who is your favorite Thunder player? Why?

Well, I went to Oklahoma State at the same time as Desmond Mason, aka the human gravity avoider, so he’s the sentimental choice. And while I’ve enjoyed the core three this season, I’ve got to tell you, the answer is probably Thabo Sefolosha. He reminds me of a younger Desmond, but with more offense. He’s a tenacious defender and plays very smart. When the move was made, I had no clue about this guy. But now I’m absolutely in love with his game. He’s a great accessory to the big three.

Who is your least favorite Thunder player? Why?

Earl Watson. I have no problem saying that, as he sometimes plays on the court like I would, which isn’t a nice comparison. He seems to have a lot of trouble getting into the flow with the team at times and just doesn’t seem to fit. He’s had some nice moments for the Thunder, but largely has been a waste of playing time. I’m glad the move to Russell Westbrook came early in the year. That move is paying off big-time now.

Who is your favorite NBA Player? Why?

There are a lot of great options to go with here, but I have to go with Dirk Nowitzki, because he goes against type so much. He’s a big man with a great outside shot and can make things happen. He seems to have a very smooth game, in that he just always seems to flow well during action.

Who is your least favorite NBA Player? Why?

Can I say Watson again? Nah, I’ll lay off him for now. Honestly, I think its Kobe. I’m glad he brought gold back for the USA in the last Olympics, but other than that I’m not a fan. Admittedly, I think it has more to do with his off-court issues than anything on the court. He’s a great player, but those who cheat on their spouses are the ultimate scum in my book.

How has the game experience changed from the beginning of the season to the end?

It’s running on all cylinders now. At the start, you could tell the gameday event staff had no clue what was going on. It made me think: "Wow, the owners really didn’t expect to be here this year, did they?" But as the year went on, things settled in and now it’s really good. Except for the Oklahoma song stuff. Play it after a win, fine. But doing it just before tip-off really kills the vibe in the arena. It’s just not a "pump you up" song. It needs to die a quick death yesterday.

What are your thoughts on the new Thunder Mascot Rumble?

LOVE HIM! I was the guy who wrote into Kelly Ogle at News9 to call the team "OKC Thunder and use a buffalo for a mascot," so I was pumped when that is what the team went with. Rumble himself seems like great fun and knows what he’s doing. And as far as having a buffalo (I refuse to call it bison) as a mascot, I think that could lead to some very cool future dominant logos for the team, such as a logo that looks like a cloud on one side, but morphing into a buffalo head at the other side, maybe with thunderbolts for feet. I know no one understands what I just said, but that’s okay. But I can totally see a buffalo being in the main logo in the future, with the current OKC logo becoming the alternate. Look around the NBA and you can see that logo being a solid alternate, comparable to what other teams use.

Who is your favorite Thunder Girl?

I have to go with Katie, because I know her in real life through my best friend. I don’t see her a lot, but if I cross paths with her at a game or around work, we always exchange a quick hello.

What was your favorite half time entertainment?

Is it too macabre to say the lady that almost drowned? It was scary at the time, even if it was a set-up. But think about the story you’d have if she died at center court. Yes, it would be a horrible story, but that’s one hell of a way to leave this world.

If you were an NBA Player, what position would you play? Why?

Oh man, in my fantasy world, I’m definitely a SG. I was pretty decent at the outside shots in my younger days on the court. I’m an honest 6-2, so would have the height for it in the NBA (though I’d likely have to be a combo guard). But in my mind, I’m a Dan Majerle clone from the later years. Solid defense. A great outside shot. A real team player. I don’t need to be the main guy, so as long as I got four or five three-point attempts a game I’d be happy.

Do you think the Thunder will make the Playoffs next season?

No. I think it’s a year too early. They’ll finish ninth or 10th last year, but will finish in the 6-7 range in 2010-11. I think that will be their first playoff appearance, so I’ll say the season after next.

What do you think of "Welcome to Loud City" and SBNation? What can we do to improve?

It’s a nice addition to OKCThunderfans.com and I love knowing that there are a couple of great places to get Thunder information. As far as improving, just keep going full steam ahead and covering the Thunder! 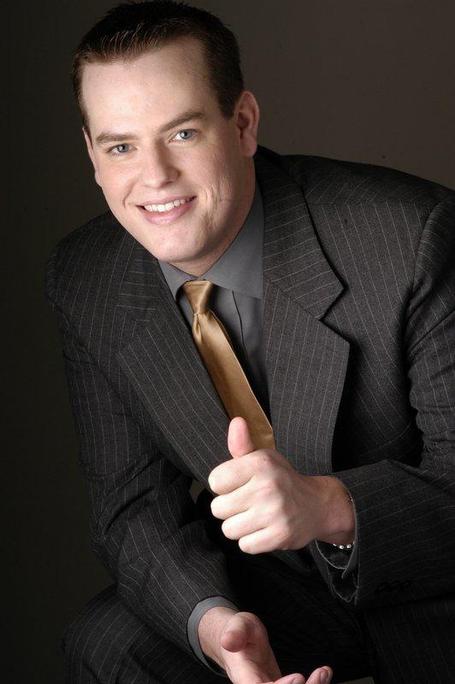 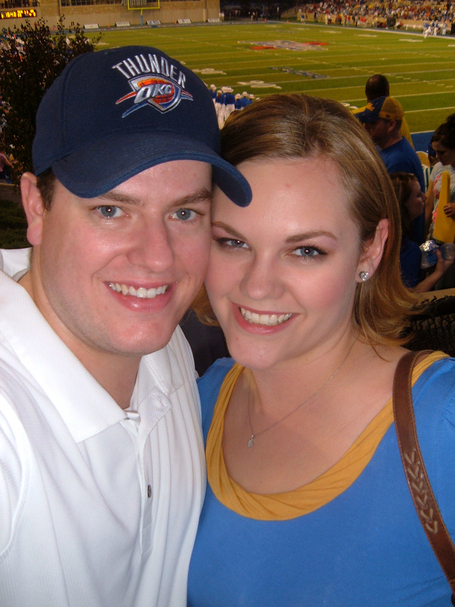 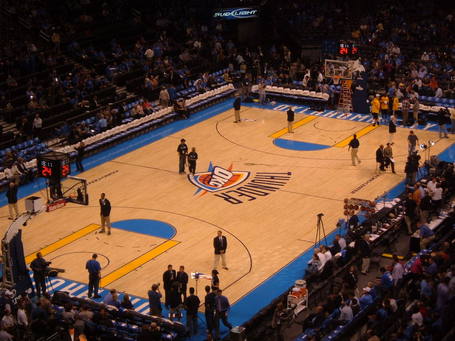