Thunder Should Take a Look at 3 Tulsa 66ers

Share All sharing options for: Thunder Should Take a Look at 3 Tulsa 66ers

The NBA season is beginning to wind down, and although the Thunder have no shot at the playoffs, perhaps they should use their remaining time wisely, and take a look at a few Tulsa 66ers who could have a future in Oklahoma City. There are three guys in Tulsa right now who are making a huge impact for the 66ers, and helping them compete in / win games they otherwise wouldn't have had much of a shot in, during the earlier part of the season. Both the NBA and NBDL seasons are winding down to a close, and the Thunder are going to have to start looking at who stays, who goes, and of course, who replaces them. I have put together a few fella's who are, at least, deserving of a look. 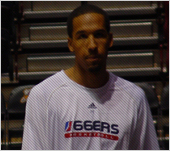 The first guy up is the former top 5 overall NBA draftpick, Shaun Livingston. I featured Shaun shortly after he was acquired by Tulsa, and in case you missed it, you can find that post HERE. The reason the Thunder should be taking a look at Shaun is because of his "team first" style of play since joining the Tulsa 66ers, and the terrific "court vision" he's put on display during his short stint with the team. Since the team signed him, the 66ers have gone 2-3, but lost two of those three games by a total of 6 points, including an overtime loss to one of the very best teams in the NBDL, the Austin Toros. In those five games he's averaging near 7 points per game, and has just over 6 assists per game, including an 11 assist performance in a 108-107 victory over Iowa.  Just to put that 2-3 record into perspective, the team was a whopping 7-27 before his arrival. So if you were to run the numbers, that would translate, roughly, to 1 win, every 4 games. That definitely makes the 2 wins in five games look a lot better.

With Earl Watsons contract set to expire next season, his stock should be high enough that teams should be interested in acquiring him as soon as trading resumes. With all the free agents set to hit the market in the summer of 2010, Watsons expiring contract shouldn't be too hard to get rid of. As far as the Thunder are concerned, there isn't much point in paying out his 6 million plus contract when he's already having his playing time eatin up by veteran Chucky Atkins, and rookie Kyle Weaver. If the Thunder do plan on ridding themselves of Earl Watson, they should consider bringing up Shaun Livingston.

Although the jury is still out as to whether he can stay healthy, there is no question that he still has some gas left in the tank, and at just 24 years of age, maybe plenty of gas. He is a guy who can come in off the bench to spell Westbrook and not have any dropoff in ability to run the offense and distribute the ball. If anything, since Russell is still developing his game as a point guard, Shaun could actually come into the game and provide a spark by simply distributing the ball in a way that Westbrook isn't quite capable of yet. In his short time with the 66ers, his clear focus has been to run the offense and distribute the ball. He even passed up an attempt at a game winning shot in overtime to pass to a teamate for what he probably thought was a better oppertunity. Also coming off his devestating injury is more likely to be a humble, unselfish player, because of the journey he's having to take to make it back to the NBA. He definitely won't take being on an NBA roster for granted, and you can count on him to make the most of his next oppertunity. 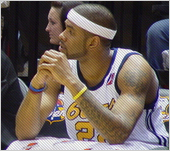 Gary Forbes is next up. Gary was acquired mid-season by the 66ers, and has been a reliable scorer every since. He's officially listed on the roster as a forward, but in my opinion is a guy who is versatile enough to play either guard or forward. At the NBA level, he's probably most suited to play shooting guard or the small forward position, making him a guy who could provide some scoring during times when Durant gets into foul trouble, or anytime KD needs a breather. Of course, because of his versatility, he could not only provide a spell for KD, but for pretty much anyone else outside of the center position. In the NBA, he may be outmatched at the power forward position, but in limited minutes, could even come in and spell at that position if needed.

In 19 games with the 66ers this season, Gary is averaging 18 points, 6 rebounds,  4 assists, and 1 steal per game. Lately though, he's been a consistant 20 plus guy in the points department. He could step into Malik Rose' spot on the roster and immediately become the scoring threat that the Thunder seriously lack on their bench. You can afford to add him as a G/F because you can replace Rose with DJ White next season. You add depth at both guard and forward by bringing him in. He's a mentally tough player who also has the physical skills to be an effective shooter and passer. He's a clean cut Presti type guy that can come in and immediately have an impact off the bench. 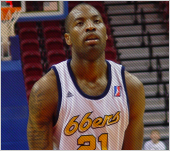 Finally, we come to the newest edition to the Tulsa 66ers, Herbert Hill. He has provided a much needed presence inside since the Thunder were forced to release Ryan Humphrey due to personal reasons. To be honest, even before Humphrey was released, this team lacked seriously on the inside. Herbert Hill has come in and immediately made his impact felt. Since joining the team, the 66ers are 2-1 with their lone loss coming in overtime to the Austin Toros. In his 3 games with the team, he's averaging 18 points, 10 rebounds, 2 assists, and near 4 blocks per game. Those are pretty impressive numbers. He may not be your typical 7' center, but at 6'10" he can play both center and power forward.

All signs are pointing to Robert Swifts exit from the team after the season, and Herb is a player that could fill his spot. More likely though he'd be giving Jeff Green breathers are the forward position, but fully capable of giving solid minutes at the center position as well. He can provide inside scoring as well as a provide a presence on the boards while starters are getting rest on the bench. He also fits into that defense first mentality the Thunder are trying so hard to establish. Averaging 4 blocks per game is huge, and although you can't expect that high of a total in the NBA, he's shown the ability to disrupt defenders and alter shots.

Who knows whether you'll ever see any of these guys in a Thunder uniform, but I felt like they are at least worth mentioning. As the Thunder wind down this season, and look to the next, these are three solid guys in the orginization that could potentially come in and make a contribution on some level in Oklahoma City. All three of these guys were brought in during the latter half of the season, and with the Thunder owning the 66ers, there is a very solid chance that these guys were brought in because the Thunder wanted to take a closer look at them. As of right now, if I could replace Watson with Livingston, Rose with Forbes, and Swift with Hill, I would do so.