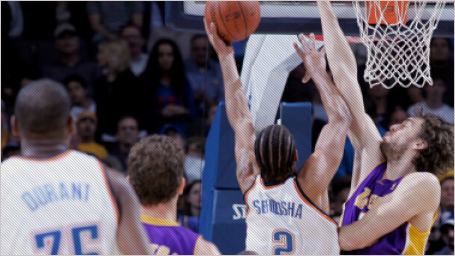 We all knew it was going to be a packed house tonight as the Los Angeles Lakers made the first of their two appearances this season in the Ford Center. Thunder fans didn't dissapoint, as usual, showing up in droves for this one. I believe the final tally was a sellout crowd of 19,136. Usually when one of the worst teams in the league, plays a home game against the very best, its an automatic blowout, and fans don't even bother coming out. Not in Loud City, and not against the Thunder. It doesn't matter who the opponent, the Thunder always come to play, especially at home, in the Ford Center. They might have gotten out to a slow start tonight, but didn't dissapoint in the 2nd half, taking the Lakers deep into the 4th quarter, before Kobe came off the bench to lead the final charge.

For the Thunder, it was a struggle of a different kind early, offense. The Lakers jumped out to a solid lead because of the Thunders sluggish shooting start. The Thunder shot under 40% and trailed by 10 points after the first quarter. As Thunderfans have come to expect, Kevin Durant, did not struggle...except during this early stretch, in which he shot 0 for 4. I should note that he finished the game 11 for 20, meaning he made 11 of his next 16, throughout the rest of the game. He once again passed the 30 point mark, finishing with 32 points, 10 rebounds, 6 assists, and 3 steals.

The rest of the team, however, was not so luckily. Kyle Weaver, of all players, was 2nd in scoring with 16, followed by Westbrook with 14. Kyle Weaver is definitely playing with more confidence, and maybe a chip on his shoulder after head coach Scott Brooks started new acquisition Thabo Sefolosha in his place. His last two games, he's combined for 35 points. I guess he's trying to show he can do more things than just play defense.

On the other side, it was of course, the Kobe Bryant show. Kobe dropped 36 points, which included 10 points (15 in the quarter) in a 3 minute span that helped the Lakers pull away from the Thunder, very late in the ballgame. He was followed by Gasol, Fisher, and Luke Walton who had 14, 12, and 11 respectively. So outside of Kobe, the ball was distributed pretty evenly between the other Laker players. Its not surprising that the Thunders run, late in the 3rd, early in the 4th, came when Kobe was on the bench. Oklahoma City cut the lead to 1 about halfway through the 4th quarter before Kobe came back in and immediately put in a bucket to get the Lakers run started. They would never look back.

I think we all knew this was the likely outcome, but as Thunder fans, for some reason, we always think we have a chance to win. I guess thats a testiment to our great young players who fight hard to the end, each and every night.