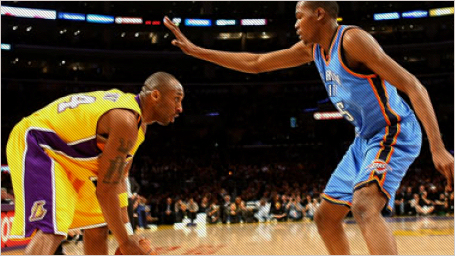 Well, the Thunder have another HUGE game tonight at the Ford Center, and you can bet your sweet ass that its going to be a packed house! Kobe Bryant leads the Lakers into Loud City with a league best 46 wins to only 10 losses. The Lakers come into Loud City as hot as they've been all season having won not only 4 of their last 5 games but, 11 of their last 12, or you could even say 15 of their last 18. It doesn't matter which one of those you choose to look at, they are all impressive, and the Thunder will have their hands full all night long. Perhaps the reason why Scott Brooks threw Thabo Sefolosha on the court so quickly on Saturday was to get his feet wet enough to guard Kobe Bryant.

Tickets are probably going to be at a premium tonight, but if you can get your hands on some, I highly suggest going. As crazy and loud as the fans were the last time I was down for the win againts the Kings, you can bet it will surely be amplified against the LA Lakers. The crowd tonight will be loud, and involved from the tipoff until the final buzzer. So if you can get your hands on a ticket, you'll have an unbelievable time being part of the action!

The Thunder come into the ballgame needing a win, having lost five games in a row. Although the team is playing considerably better ball than in 2008, they have run into an incredibly tough February stretch. They were able to take advantage of a light schedule in January to stockpile a nice number of wins, but from here on out, they will be hard to come by, all the way until seasons end. But that's not to say this team can't compete and knock off the leagues best team, because at home, with this crowd, these young energizable players, anything can happen.

I really don't think there is much point in getting too involved in breaking down the matchups, its the Lakers, everyone knows the Lakers. They are on TV seemingly every week, and its easy to see why. Kobe Bryant, Pau Gasol, Andrew Bynum, Lamar Odem, Derek Fisher, do I really need to go on? Honestly I think thats quite enough.

Just get your tickets, get to the game, be a part of Loud City, and scream your head off!