Ten Questions and Answers with At The Hive (Hornets)

Share All sharing options for: Ten Questions and Answers with At The Hive (Hornets) 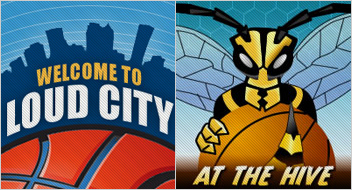 First off, let me preface this by saying this whole thing was put together before the Tyson Chandler trade, so there aren't any questions regarding that here, although we do welcome them and other Hornet fans to comment on that situation as well. So anyway, we all know the special relationship Oklahoma City has with the Hornets, and this Q&A is largely about that very thing. I want to thank At the Hive for taking the time out to do this, and you can check out there site here: AT THE HIVE On to the Q & A...

WTLC: Generally speaking, when teams relocate, the rest of the country tends to have a negative reaction and general dislike for the team, as has been the case with the Sonics moving to OKC. With the special attachment the New Orleans Hornets have to Oklahoma City, what has the reaction to OKC getting its own team been like amongst Hornets fans?

At The Hive: I think the animosity over /how /OKC acquired the team has been pretty universal across the NBA, Hornets' fans included. But we at least understand how well OKC had supported a team in the past, something most others don't acknowledge. Personally, I feel like OKC deserved a team at some point due to how the Hornets were not only received, but sustained.

It's sad that it happened this way... but how can the people of OKC be held responsible for that part?

WTLC: For fans of the Thunder, when the Hornets come to town to play the Thunder, it was definitely a special occasion. What was the feeling around Hornets fans as the Thunder made the trip down to New Orleans the next night?

At The Hive: I don't think there was too much going on when the Thunder came to New Orleans, but that Hornets in OKC game was definitely special. From all the clips they showed on ESPN- Byron, Peja, Chris Paul all talking to various members of the Thunder staff- you could tell how special it was for the players too. If I'm not mistaken, Chris Paul still maintains his house near the city. And of course, he still conducts his summer camp there. Byron Scott's daughter also lives there, so there are plenty of personal connections to go around.

WTLC: While the Hornets were displaced and playing in OKC, was there appreciation for the way OKC supported the team? Any animosity?

At The Hive: I think tremendous appreciation more than anything. The Hornets definitely got off to something of a rocky start in New Orleans, in the post-Charlotte era. The Baron Davis-Jamal Mashburn tandem was finally broken up, there was a bitter parting with Davis, a somewhat bitter parting with Coach Paul Silas, a disastrous stint with Tim Floyd...there wasn't nearly as much to envy about the Hornets then as there is now. The turnaround did start with Chris Paul, but his initial teams were still quite poor. The fact that OKC mustered up such support for that squad is remarkable.

WTLC: Even though the two teams are in different divisions, do you get the feeling that this is turning into a mutually respected rivalry?

At The Hive: Haha, maybe in a few years. At full health, I think the Hornets are too much better for it to be a legitimate rivalry... but if the rumors about the financial demise of New Orleans are true, it could happen sooner than expected. The Thunder are obviously well on the way up, so maybe the two teams meet halfway (though I hope not).

WTLC: Is CP3 the best point guard in the game today? Where does he rank?

At The Hive: Definitely. Pretty much every offensive measure imaginable has him light years ahead of his closest competition (according to PER and WinScore, the two most widely accepted measures out there, Paul posted a better season as a /rookie /than Deron Williams (his closest match) has posted in his entire career). I think that given good health, Paul will easily finish as the greatest point of all time. And that's only mentioning the offensive side of the ball. Defensive stats are still in their infancy, but both Basketball Prospectus' DQual and Basketball Value's +/- indicate that Paul is one of the best defenders in the game, let alone his position.

WTLC: Despite the OKC Thunder record, how good do you think they are, and what kind of upside to you see for this team?

At The Hive: I see some ridiculous upside in this squad. You guys are really, really lucky to get to watch Jeff Green/Kevin Durant/Russell Westbrook all grow up together on the same team. I can easily envision Westbrook becoming a top 5 point guard, Durant becoming a top 5 overall player, and Green evolving into a reliable third option. A decent job of team construction around those three should yield great results. Very, very few teams have three core guys locked up in rookie deals, so the future looks bright for the Thunder.

WTLC: What trades (if any) would you like to see the Hornets make this week before the Trade deadline?

At The Hive: I'd like to see a backup big-man added to the roster, but it seems unlikely at this point. Marc Stein reported on a potential Tyson Chandler to OKC deal, but I think the only way it happens is if the Hornets opt to pursue financial flexibility at the expense of this year's team. I'd lean towards trying to make a deep playoffs run this year instead of the former.

WTLC: The Hornets record is currently 30-20, and if the playoffs were to start today, they'd be entering with the number 6 seed. Do you see the Hornets making some noise in the playoffs this year?

At The Hive: It all depends on whether Tyson Chandler can return to last year's form. Injuries and various other issues have hampered him all season. In essence, he's the only thing really holding this team back from last year's levels. The addition of James Posey more than cancels out the departure of Jannero Pargo, so this team should at least be expected to make some noise in the playoffs.

WTLC: Who will win on Tuesday when the Hornets return to the Ford Center to face a much improved (since their last meeting) Thunder team?

At The Hive: I'd hope the Hornets, but the Thunder have a great shot. Durant will be tough to cover, and Paul may struggle to cover Westbrook due to his recent groin injury limiting his mobility.

WTLC: What did you think of Kevin Durant's performance during All-Star weekend?

At The Hive: Has any guy ever had a better AS Friday/Saturday? Dropping 46 in the rookie game and then staging an amazing comeback in HORSE.... in all honesty, I thought he should've been playing in the AS Game itself, not the Rookie game. I have to admit, I doubted Kevin Durant a little during his rookie campaign. I thought he took way too many forced shots, and I really questioned his efficiencies from the field. This year, he's come out on fire, and I don't think it's a fluke. The guy's for real. If he can ever take a more active role in the rebounding game and develop defensively, Durant's definitely an MVP-type talent.