A Special Thanks to the New Orleans Hornets

Share All sharing options for: A Special Thanks to the New Orleans Hornets

With the New Orleans Hornets coming to town this week, to get the post All-Star schedule kicked off, I figured it was a good time to take a few minutes and pay tribute to the New Orleans Hornets organization, its fans, and players. As Thunder fans, we have to be thankful for what they did for Oklahoma City, despite the tragic circumstances surrounding that whole situation. So, in case you were born in a barn, and don't already know, after Hurricane Katrina, the New Orleans Hornets made Oklahoma City their home away from home and played parts of two seasons in the Ford Center. The support the City gave to the displaced Hornets would ultimately play a large role in the City becoming a permanent home for an NBA team.

For as long as I can remember, having been born and raised in Oklahoma, the state itself was looked at as a College state and could never support a professional team. I remember back, quite a few years ago, when Oklahoma City was up for an NHL Expansion team, and ultimately lost out. I remember thinking, man, if we can't even get an NHL team, we're never going to have a major professional sports team in Oklahoma. If it wasn't for the tragic events of Hurricane Katrina, and decision by the New Orleans Hornets to play a large amount of games in Oklahoma City, we may very well have never gotten the opportunity to show that we could support a professional franchise.

There is no question in my mind that had the Hornets not elected to play games in Oklahoma City, the Thunder would NOT be here now. It gave the City a chance to prove that not only could we pack the house and support a team, but we could do it on a consistent basis. For those two seasons the City proved itself to David Stern, the NBA, and the entire country. It erased any doubts as to whether the city/state could handle supporting a major professional franchise, and ultimately earned enough confidence to be seriously considered as a hot spot for relocation.

Over the course of those two seasons, residents of Oklahoma fell head over heals in love with the Hornets. Although I wasn't a big Hornets fan (longtime Sonics fan), I was happy to see such an attachment for the team around the state. The people here fell so in love with the Hornets, you heard a lot of rumblings about how everyone wished it was the Hornets moving here, after it was announced that the Sonics were moving to Oklahoma City. They would also say things like, they didn't know if they'd be able to get into them as much as the Hornets because they grew so fond of them. I can't even say how many times I heard "Man, this is awesome, I can't believe we have our own team...I just wish it were the Hornets." Even after a month or so into the season I was still hearing about the Hornets, and how they wished we had got them instead of the Thunder. There is no doubt, the city had a wild love affair with the Hornets, and hated to see them go.

Of course, halfway through the season, it seems like fans are starting to have those same feelings for the Thunder. I'm hearing less and less rumblings about the Hornets as the city and state have really started to embrace this team as OUR TEAM. The team, the players, the atmosphere, its awesome, and the fans seem to be loving every minute of it. The crowd here is so loud and rowdy, that its been dubbed "Loud City" and we also have the Hornets to thank for that as the creation of Loud City began during their two years here, and I've put a couple pics below from that era for nostalgic purposes.

So thank you city of New Orleans, thank you Hornets fans, and thank you entire Hornets organization! We owe you guys a great deal and will always root for you guys...just so long as we're not playing each other. 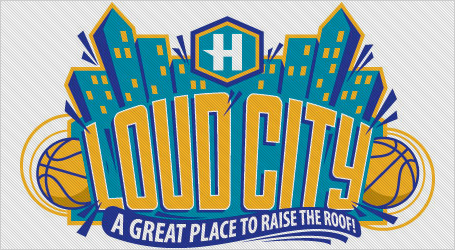 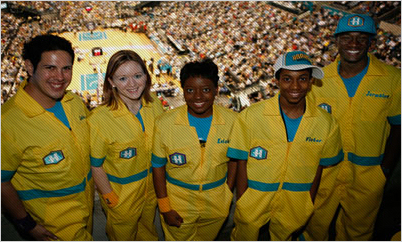