The Thunder spent yesterday afternoon giving $1,000 dollar shopping sprees to 10 families at a local Target. How cool would it be to go basketball shopping with KD? 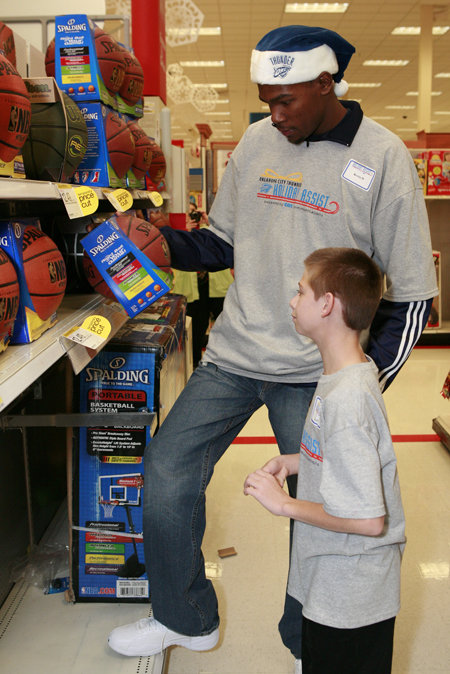 a bright future ahead. Clay Bennett may not have made the right choice in moving his team from Seattle, but choosing young GM brainchild, Sam Presti, to lead the Thunder was genius. Presti has managed to pull the proverbial rabbit from a hat with many of his decisions.

For starters, the Thunder’s team core is built upon Top-5 Draft picks: Durant (2), James Harden (3), Westbrook (4) and Green (5). Presti also swung deals for Thabo Sefolosha—who has become their definitive defensive stopper around the arc—and 7-footer, Nenad Krstic, to roam the paint in OKC.

The young nucleus of this team, comprised of those four Top-5 Draft picks, is already playing at a high level. Durant is leading the team with over 28 points and 7 rebounds a game. While in the midst of a breakout season—which is strange considering he averaged 25.3 a year ago—Durant is also averaging the most rebounds, assists and steals of his short career.

The 6-9 Green, who’s averaging 14.7 and 6.3, is a solid inside-outside presence and will be very, very good in Oklahoma City for many years. Even at 23 years old, Green has only showed glimpses of what he is capable of doing.

Harden is also playing well and as he continues to loosen up to the NBA game, he will begin playing more fluidly—although he did drop 26 and 9 in a 104-88 win over the Warriors Monday night. With these pieces in place—and help coming from more experience—the Thunder are looking surprisingly composed this season. Wait, did I forget someone?

In my opinion, Westbrook is the key to the Thunder’s success. Durant is your go-to-guy and can drop 40 whenever he feels his averages slipping, but Russell is the fire starter. Besides Aaron Brooks and Ty Lawson, Westbrook might be the fastest guy in the League with or without the ball. He clearly has a second gear and dices through defenses effortlessly. Westbrook gives the Thunder a stable point guard that knows—and can—when to score and when to pass (He dished out 15 helpers in a win against Philly a week ago). Westbrook understands the flow of the game and can adapt to what the defense gives him.

Durant On Oden: "I almost drew a tear" | Thunder Rumblings
[KD speaks out about the Oden/Durant debate.] "Once I heard he was having surgery, to be honest with you I almost drew a tear for him," said Durant, who became the no-brainer No. 2 pick behind Oden in one of the most highly-debated decisions in the draft’s history. Durant understands the link he will forever share with Oden and the unavoidable games of "What if?’ some are sure to conjure up. And Oden’s newest hurdle only heightens the historical significance of their selection order. After three seasons, Oden will have played just 82 games, or the equivalent of one full season. Durant, meanwhile, has taken his projected place as the face of a franchise.

He’s on his way to becoming an All-Star and an Olympian. Durant has missed only 10 career games and this season is averaging 28.1 points, 7.1 rebounds, 3.1 assists and 1.8 steals, all career-highs. But in no way does Durant feel vindicated for being passed over, and he said the constant comparisons are pointless. "It’s unfair to him because people don’t know how hard he works every day," Durant said. "But they’re already ready to tear him down. That’s life I guess. But he works hard every day and he does his job every day and people don’t give him credit for that."

Despite their differing levels of individual success, Durant humbly credited the Blazers’ team success and said he doesn’t think Oden should have to worry about living in his shadow as a player. "Those guys are a playoff team and are one of the top teams in the West," Durant said. "Without him they wouldn’t be there. So I guess I’m living in his shadow. He was the No. 1 pick. I was the No. 2. And his team is doing better. I’m just trying to fight toward that with my team. So I wouldn’t say he’s in my shadow."

First-Quarter Report: Teams: Identities Have Developed, for Better or Worse - The Baseline - Sporting News
[The Baseline mention OKC while discussing the league surprises and disappointments.] Rising in OKC. They hustle. They play defense. They have better-than-expected depth. The Thunder are on the way up, and there's a lot more to this group than Kevin Durant. They're going to challenge for a playoff spot.

NBA Power Poll: The Baseline - Sporting News
[The Baseline also rank OKC #13 in the NBA.] 13. Thunder (13). Tough enough for the Blazers to watch C Greg Oden go down again to a knee injury. Even tougher when you get a look at Kevin Durant.

CANOE -- SLAM! Sports: DeRozan takes slow route
[Just in case you didn't know who else Harden is friends with...] Jennings and DeRozan were teammates back in the sixth grade and through high school played AAU and Nationals together. DeRozan counts Jennings, James Harden, and Jrue Holiday among his closest friends in the NBA. Jennings and DeRozan share the longest bond and have been

Thunder notebook: Practice time | NewsOK.com
You won’t see it on a stat sheet, but one area the Thunder has improved is deflections, a stat Brooks and his staff tracks in practices and games. Deflections lead to steals or can milk seconds off the shot clock. OKC recorded 10 steals and several deflections in Monday’s win over Golden State. "We’re doing a good job getting our hands on balls," Brooks said. "That’s what we want, to use our length."

NBA Rookie Rankings: Who has the most upside? - ESPN Insider
[ESPN ranks Harden the #10 rookie with the most upside. Not to be confused with ROY rankings, which Harden is still sitting pretty at #3.] To be fair, Harden is this low on the list only because he's already so polished. He has learned to play a smart and crafty game -- and has done so for years -- because he's not superathletic. As I've said before, he plays like a veteran with a steady pace, under control almost all the time. Sure, Harden can improve his athleticism to some degree, and that would help his overall game, but given the reasons the Thunder drafted him -- his passing skills, shooting and ability to mesh with Kevin Durant and Russell Westbrook -- the pressure on him to develop into a superstar is just not there; he may never even be an All-Star. But make no mistake, he has the talent to put up big numbers on a championship team.

SLAM ONLINE | " Chuck Hayes Hates LeBron’s Dancing, Too
[So the Rockets share their opinion of LBJ's antics.] James has already ticked off Joakim Noah, and now Chuck Hayes has voiced displeasure with LBJ’s dancing on the sidelines during blowouts: "Yeah (it was wrong), but if Joakim Noah and the Bulls have a problem with it, beat him, he won’t dance,’ Hayes said. ‘I notice that the Cavs, they do all their sideline acts in the game when they’re up big. When it’s a close game, they don’t do that. Make them respect you and they won’t do it. To showboat another professional, it’s disrespectful. If you feel disrespected, do something about it within the game, nothing dirty. Eventually, all the dancing and acting will stop. They only do it when they’re up big.’ Shane Battier, however, had another theory about why James danced. ‘Dancing With The Stars is quite the platform to launch a career,’ Battier said. ‘Maybe, he’s trying to launch a career. LeBron’s a smart businessman. I wouldn’t put anything past him."’ [Just in case you missed this fiasco last week, check out the youtube video.]