Well, that game went pretty much as I expected it to, yet at the same time, it held a lot of surprises.

Lets start out with the expected. The Warriors started off this game with the lead, slowly rising to a margin of 21-15. Then, the Thunder came back to within 1 point by the end of the quarter, and took a short lead at the beginning of the 2nd. Then, the Warriors went on another run, making it 35-27. Then, the Thunder climbed right back with a run of their own, and it was pretty much even by the time the 2nd quarter was over. This concept of runs and draughts is frequent in Warrior games. By the time the 3rd rolled around, the Thunder came out rolling, taking a 62 to 54 lead. The Warriors pounded their way back to tie it at 62, and then....Corey Maggette lost his cool. I couldn't see what was going on from where I sat, but apparently he was badmouthing somebody, causing him to commit a double technical foul, along with his normal foul. He was escorted out of the arena, giving the Thunder 3 free points and leaving the Warriors bench with 2 guys and an emergency backup in Devean George. At this point, the entire team collapsed. If you were a Warriors fan, you've seen this happen before (most notably during the Steven Jackson and Baron Davis era), and you knew the game was over. Monta Ellis got called for a technical later on, but that's pretty excusable, considering he was the only one scoring for the team.

Now, let's move to the unexpected. This could hardly be considered a fast break game at all, not very typical of the Warriors. It was a game of possessions, with teams actually running offensive sets, and the Warriors not being silly enough to fire it up within the first 7 seconds. In fact, I hardly remember any Warriors fast breaks at all. Most of the fast breaks were made by the Thunder, after the Warriors made a huge defensive error. Whenever the Warriors stole the ball in the back court, the Thunder defense would get back down the floor before the Warriors could do anything.

Another surprising statistic is the fact that Monta Ellis wasn't only able to guard and complete with Kevin Durant, he was able to guard him well. Now, I know, Kevin Durant did have 28 Points, 9 Rebounds, 4 Assists, and 3 Steals. But he also had a whopping 6 turnovers, a poor 9-24 shooting, and 18 of his points came after Corey Maggette's foul. I know that some of those 18 were legit, but Monta Ellis essentially held the Thunder's best scorer to 10 Points though the first 2 and a half quarters, in which he scored less than Russell Westbrook and Jeff Green. If the game had been competitive the whole time, who knows? Monta Ellis might have held him to 16, and people would be saying a whole lot of "wows" right now. Obviously, for his defensive prowess, Monta Ellis gets the Thunder Plunderer award. I know, he had 9 turnovers....but I don't want to award it to Stephen Curry, as explained later. 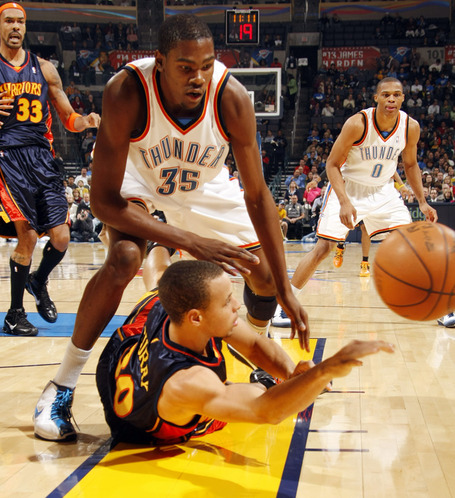 KD: I'm sorry, my fine sir, but could I perchance acquire that basketball from you? Curry: I do apologize my good man, but I have already thrown it to one of the gentlemen on my basketball team. KD: Ah, well, alright then. Cheery-O! Curry: Cheery-O!

But, admittedly, the Thunder also did an excellent job on defense against the Warriors guards. As a team, the Warriors had a whopping 20 turnovers to 12 assists, with Monta having 9 turnovers and Stephen Curry having 5. It was clear that while both could move the ball well, neither was functioning as a true point guard, and that hurt the Warriors. C.J. Watson, who was in for the entire game, was completely shut down on the offensive end of the floor. 10 Points? That's like scoring once every 10 minutes. Sheesh.

Regardless, back to the Thunder. This is a Thunder blog, isn't it? James Harden had another excellent game tonight, pulling in 26 Points, 9 Rebounds, and 5 Assists. He stepped up the scoring when Kevin Durant couldn't, keeping the Thunder in contention. Sure, 8 of those points came in garbage time in the 4th, but it's undeniable the help he gave tonight, and it's undeniable how much he would help the Warrior's scoring situation right now if he was on their team. He even outscored, outrebounded, and outassisted Curry in 7 less minutes. If I were a Thunder fan (which I supposedly am), I wouldn't regret taking Harden at 3 at this point. He may have to provide scoring on the bench, but he has a long career ahead of him. Oh, and need I say, "Thunder Wonder"?

Jeff Green also pitched in, adding 21 Points, 13 Rebounds, and 3 Assists, earning him the Thunder Down Under award. He also added to the scoring while Durant was out of commission. The Thunder Blunder, without question, is Russell Westbrook. I know, he had decent numbers considering he was up against a team full of players who do the exact same thing he does offensively, except better in every way. But 4-17? Sheesh. 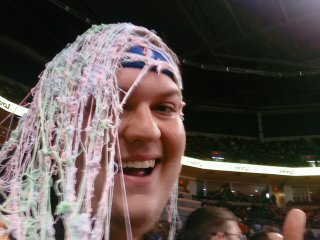 Me, shortly after being stringed.

Just adding to the bizarro night in which the Warriors played half-court ball and Monta Ellis defended well was the vendetta Rumble took against me. I've cheered for the Warriors twice before when the Thunder were in the Ford Center, but it was before I was well known as a fan, and before rumble ever existed. It all started with Rumble getting people excited in the section, and other fans encouraging him to jeer me. Then, his cold, angry eyes met mine, and he clearly disapproved of what I did. Eventually, he left. But, just before the 4th quarter started and the game looked out of reach, Rumble popped out of nowhere and emptied about 5 cans of silly string on to me. I tried to think of something clever to do, but I just sat there, in extreme shock and awe. He left as soon as he'd come, and I now have a ball of goo sitting in my car as a result of the incident. As the game ended in a Thunder victory, Rumble stopped on his victory segway to stare at me again. He pointed to me, and cut his throat as an indication of what he wanted to do to me. It was all very shocking, very entertaining, and very flattering. How many people can say they've drawn the ire of the mascot so much as to have him break out in a vendetta against them? I guess I'm one of the lucky few, heh! In any case, I'll get him back one day....and it will be in the name of Thunder, the old Warriors mascot! I'll get you, Rumble!