Yet again, my prediction was barely (4 points in total) off of its mark.

But, it was never close. This was just one of those games. The game that you realize that your young, upstart team aren't Supermen that lose closely because they were away, because of an injury, because the refs weren't on their side. Sometimes, they just flat out lose. And badly.

The game got progressively more and more out of hand as it went on. Sure, the Thunder had a 10-7 lead in the first, and they climbed back to within 6 midway through the 2nd, but the outcome was never really in doubt. By the end of the 3rd, their lead was up to 23, and Doc Rivers put in the Celtics scrubs for the rest of the game.

So, what do we take away from a game like this? Well, we are reminded of the fact that Jeff Green struggles against true power forwards, especially those as skilled as Kevin Garnett. But we already knew that, so it's no surprise he struggled here and receives the Thunder Blunder award. Also, none of our big men even stood a chance against Boston's. Sure, Ibaka had a couple of scores, and D.J. White managed to hit a few jumpshots in garbage time, but compared to 13 and 8 for Perkins, 23 and 8 for Garnett, and 10 and 3 for Wallace, it was a massive failure on the Thunder's part.

This game also shows that no matter how bad the loss gets, or no matter how badly a certain position matches up against the opponent, the Thunder can always count on Kevin Durant. He was the lone bright spot offensively, scoring 41% of the team's Points with 36, and grabbing 5 Rebounds and 2 Steals. He rather uncharacteristically got no assists, but that's because he scored every time he got the ball and, quite frankly, nobody else was able to help him out. It goes without saying that he's tonight's Thunder Wonder. 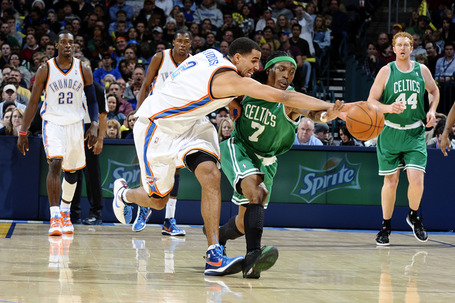 Picking the Thunder Down Under for tonight is like trying to pick the perfect fruit or vegetable in a supermarket. No matter how hard you look, even the best one is going to have some sort of flaw. Russell Westbrook emerges as a potential candidate, but he had 5 turnovers along with dreadful 6-16 shooting. Mike Wilks also emerges as a candidate, but it's really hard to give an award to someone for doing the equivalent of dribbling the ball and not screwing up. Thus, I must give the award to Thabo Sefolosha. I know, he scored 0 points, and he had 3 turnovers. But he had 5 Rebounds, 3 Assists, and 3 Steals. But, most importantly of all, he held Ray Allen to just 11 Points on 4-11 Shooting. Obviously, this was more than made up for by the scoring of Pierce and Garnett, but try to imagine this game without Thabo. Yeah, I'm seeing the 30 Point blowout right now.

On the Celtics side of things, it couldn't have gone more perfectly. The starting lineup had a whopper of a game, the key backups in House and Wallace did what the Celtics needed them to do, and the mop-up crew didn't blow the lead. Marquis Daniels was kind of useless, but not everybody can have a perfect game. But, needless to say, Kevin Garnett was their Thunder Plunderer. 23 Points, 10-11 Shooting, 8 Rebounds, and 3 Assists round out just another day on the job for the Celtics great.

Next Game: Versus the Warriors, Monday, December 7th, at 7 PM Central Standard Time.