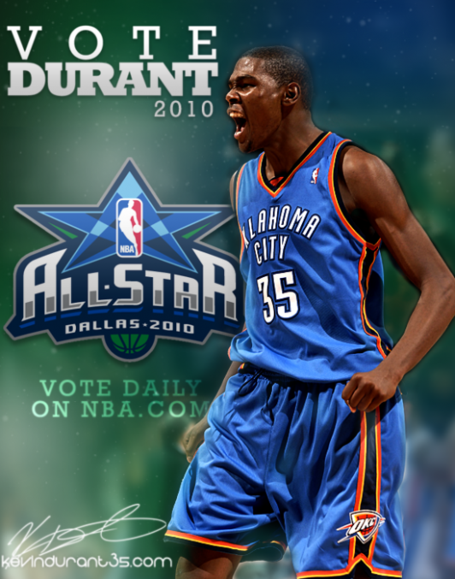 CelticsBlog's on Tonight
The Celtics are in the middle of some sort of streak or something (shhhh...lets not talk about that), but these are not your father's thunder. The last time these two teams met, the Celtics beat the Thunder by almost 20 points, and I joke you not, Mikki Moore had a double double. The Celtics are 4-0 versus the Thonics (Sunder?) since the former Sonics tore apart their roster trading away Ray Allen and Rashard Lewis. They've made virtually no roster moves since last season's trade for Thabo Sefelosha. Paves the way for a good feeling about tonight right? Wrong! These Thunder are dangerous. Sure, we're winning a few games now, but these Thunder have been shocking people all season long. In just the last month, they've beaten Orlando, San Antonio, and Utah. They took the Lakers to overtime. Kevin Durant is currently 4th in the league in scoring at 27+ per game. Russell Westbrook is playing like a top 10 point guard at 16 points and 7 assists a contest.

Green on KG's potty mouth
All-Star Kevin Garnett has the reputation for being the league's biggest trash talker. "If they want to talk, they can talk," said Jeff Green. "We just have to worry about what we have to do. We can't fall into their little traps of trash talking and them getting in our heads and get us playing out of our (game). We have to continue what we've been doing — sharing the ball and playing defense. "If they want to talk they can talk. If we win the game that will be our talk. We know they'll come in amped (up) and they'll talk a lot of trash. It is mostly Kevin, but guys feed off that. It goes into the way they play. I don't talk at all."

Marcin Gortat isn't happy with Orlando
"I love the organization, but I'm not going to stay here being a back-up player and playing five minutes a game," Gortat said. "I hope people understand that. I know I can have a bigger role on another team." Except that this season he just started a new five-year contract with the Magic. Only a trade can provide a bigger role on another team. Perhaps Gortat's frustration should not come as a surprise. He was less than enthused when the Magic matched the Dallas Mavericks' offer of five years, $34-million this past summer for the restricted free agent from Poland. He likely would have been the Mavs' starting center. Gortat said he isn't delivering a play-me-or-trade-me-ultimatum, realizing his role could change quickly. He said he'll likely meet with coach Stan Van Gundy after the season to discuss his future and direct his agent, Guy Zucker, to talk with general manager Otis Smith. "I really don't think about this now. But at some point, I want to have the chance to sit down with coach Van Gundy and tell him how I feel and where I want to go with my career," Gortat said. "I'm 100 percent sure coach will understand and will do the right thing for me and the team.

The Oklahoman looks at the Allen/Green trade
"I’m glad they did it that way," said Durant of the organization’s rebuilding. "I like the route they took with helping me grow as a player and also Jeff. I guess it was a blessing in disguise. "It was tough losing like that, but it turned me into the player I am. It put a lot of onus on me growing up fast and helping me become a better leader. Because if those guys would have been there, none of the responsibility would have been on me. I would have just been another rookie learning." Because of the financial flexibility the Thunder created through a flurry of subsequent trades, the Thunder was able to sign Nenad Krstic in mid-season last year and recently lock up rising defensive star Thabo Sefolosha. Oklahoma City now has the league’s lowest payroll and is set up to be a major player in the highly awaited 2010 free agent class. "Who knows where myself, Kevin, Russell would have been if things wouldn’t have went down the way they went down?" Green said. "But we’re developing great, and we have a great connection. We have a good thing going here in Oklahoma and eventually, if we continue to work hard, we’ll be at the position that Boston’s at right now."

Hardwood Paroxysm ponders the Thunder
I kind of want to put Brooks and Triano in the Hadron Interim Collider and see if we can put a complete coach together. Because Brooks has his guys playing their brains out and destroying people with athleticism but they can’t run an offensive set to save their souls. Seriously, they should put tape down on the floor for them. And Triano’s sets result in high efficiency shots and great ball movement and flow but his defense is so bad Don Nelson is licking his chops at a chance to play them. Most disturbing is little they seem with getting Durant quality shots in key situations. They either run a play using screens and curls that results in a shot for someone else, or they give the ball to Durant and let him go ISO, inevitably leading to a double that nets them nothing. Seriously. He’s good enough to get the shot off, kids, but if you give him some help, he’ll score EVEN MORE! Magic! Also, Jeff Green is my favorite Thunder Dude and if he learns to roll to the basket I’m going to name my child after him.

Green Street " NBA Power Rankings 12/3
14. Oklahoma City: Got a text the other day from my buddy Christian, one of the smartest basketball people I know. It said: Within three years, the best player in the NBA won’t be LeBron, Kobe or Wade. It’ll be Kevin Durant. Most of the time, despite his smarts, I think Christian is nuts. But I think I agree. If Durant played in New York, Spike Lee would do a movie on him.