Another Day, Another Dollar.

That saying perfectly describes the game on Wednesday Night. Not boring, not exciting, just a typical game in which you're nervous about the outcome for a bit, but you realize that, in the end, the game will turn out as predicted. 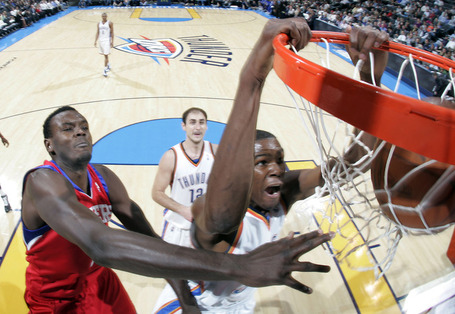 Despite my depiction of the plainness of the game, it was actually one of the highest scoring games this year. It was raining 3s, with both teams combining for 47 3 point attempts altogether. Kevin Durant was the main culprit on the Thunder, hitting an amazing 5 of 7, and Jason Kapono and Jrue Holiday were the main culprits on the 76ers, both going 3 of 6. It was kind of refreshing to see that the Thunder were actually capable of keeping up with the other team from the 3 point line, especially when they had sharpshooters like Jason Kapono and Thaddeus Young. Even though we were able to keep up with the other team, I'd venture to say it was through a sheer lack of perimeter defense, rather than the ability of our shooters. I can say this because Sefolosha, Green, and Durant all hit well above their usual percentages, while only Westbrook (who had a really off night), Harden, and Collison (who only shot one 3) shot below par.

It was also nice to see Jeff Green finally come back to form as the second leading scorer of the team, with 19 Points, 6 Rebounds, 4 Assists, and 2 Steals. The bad thing is that he was matched against a comparable opponent for tonight's game. He usually excels against men of his size and stature, but when faced with a bigger opponent (like Elton Brand), he'll usually get into foul trouble and have a game well below-par. I'm not trying to downplay what happened tonight, just tell of something to keep tabs on moving forward. 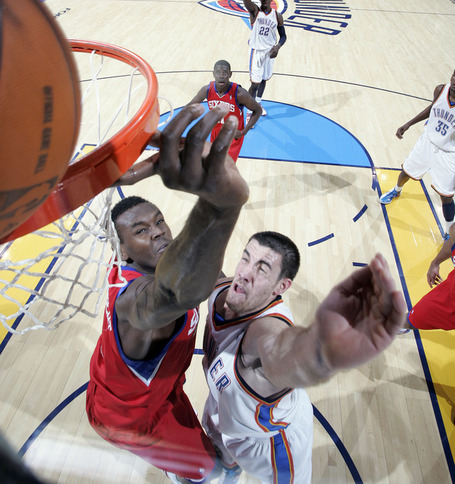 The biggest story of the night was Nick Collison. He easily contended with Philadelphia's low-post monsters (Dalembert and Brand) by getting 18 Points, 7 Rebounds, 1 Steal, 1 Block, and no Turnovers in 20 minutes of action. The only shot he missed was a 3 Pointer, making for possibly his most efficient performance of the year, and grabbing him the Thunder Down Under Award. I'd like to give him the Thunder Wonder just for showing Philadelphia's lazy big men who's boss, but that award has to go to Kevin Durant, who had 33 Points on excellent shooting all-around, 5 Rebounds, 2 Assists, and 3 Steals.

The big failure of the night has to be James Harden. In a game where he would typically excel (poor perimeter defense, lots of opportunities for assists), he flopped, shooting only 3-7, having only 1 assist, and turning it over 3 times in 27 minutes. I may be a bit harsh in giving him the Thunder Blunder Award, but this is a game where virtually everybody contributed offensively, given the amount of time they all played. Sure, Russell Westbrook got only 7 Points and hit only 1-11 Shooting, but his career high of 15 Assists, solid 5 Rebounds, minimal 2 Turnovers, and solid 2 Steals more than make up for it. 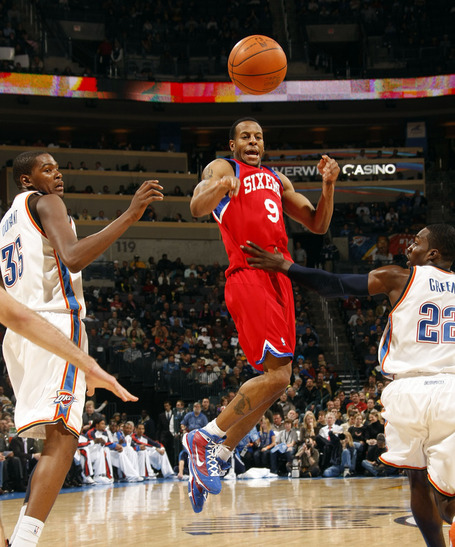 Yet another "afraid of the ball" picture.

On the 76ers side of things, I think they're regretting playing the Thunder's game by demoting Elton Brand to the bench and starting Andre Igoudala. As a result, it just showed how ineffective Brand and Dalembert are in the lane without a partner, and what Jeff Green can do to a comparable opponent. Still, there were some good tales to be told, as both Andre Igoudala and Thaddeus Young had great scoring nights, with Igoudala dropping 28 and Young dropping 20. Still, Igoudala's 6 Rebounds and 5 Assists sets him apart, and earns him the Thunder Plunderer Award.

Next Game: Versus the Celtics, Friday, December 4th, at 7 PM Central Standard Time