That's all I can say. This win makes me so unbelievably happy....I've followed the NBA nearly my entire life, and the last time I followed a team that was .500 at Christmas, it was 2005. And that team finished with 34 wins. So you can see why I'm feeling overjoyed right now.

That being said, this game was no picnic, and a lot of mistakes were made by both sides. But, facing facts, the Suns were playing catchup all game. It all started when the thunder scored 6 in a row to put the team up 18-11 with 6:41 to go in the first. From there, it was a relatively stable lead that reached its peak at 12 points with 5:20 and 4:13 to go in the 2nd quarter. Sadly, that lead was erased by a Sun run, consisting entirely of Steve Nash and Amare Stoudamire. They combined for 18 points in the last 4:13 of the second, eventually tying it at 64 with 13 seconds to go. Thankfully, an amazing hanging shot by KD put the Thunder ahead by two at the half, but I still smelled trouble.

As the Third quarter rolled on, the Thunder managed to nurse their small lead until they barely lost it towards the end of the quarter. When it was all said and done, the teams were in a dead heat going into the fourth. Again, the Thunder jumped out to the lead, and managed to keep it that way until Jason Richardson hit back to back jumpers with 4:11 to go in the fourth, giving the Suns a 106-104 lead. But the game was far from over. Ibaka managed to get an amazing tip in to tie it at 106. Ibaka continued to fight hard, but Amare drew two fouls on him in a minutes, forcing him out of the game. This left it at 110-108 in Phoenix's favour, but, after the annoying Remington Park graphic, Kevin Durant managed to overpower the flopping Jason Richardson for an amazing plus one. This left it at 111-110, and after Stoudemire missed a short layup, Jeff Green made an amazing play. I would explain it, but please, just watch it, it's pretty darn spectacular. Zoom ahead to 1:54 in this recap.

After that, you knew it was almost over. And after Steve Nash missed a freethrow, KD Rebounded his own miss, and then spotted up for another jumper and hit it, you knew this game was over. Wow.

(On a side note, I'm getting pretty close to being able to provide video of the game on my own for this site. Don't expect anything full blown, but I might do my own video recap or provide a clip here and there when necessary.)

What more can you say about this game. Things just clicked for the Thunder on so many levels. First of all, you had the total shut down of Jason Richardson courtesy of Thabo Sefolosha. JRich hit a clutch 3 towards the end, but for the most part he had a pretty empty game. 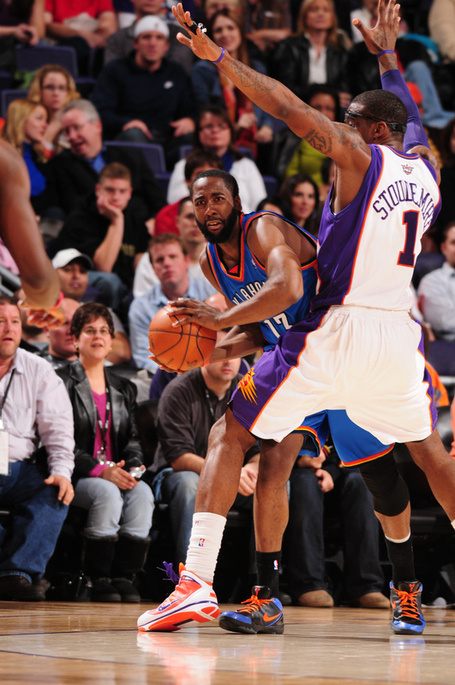 At this point, James Harden is afraid of even looking at Amare's shades.

And, as per my keys to the game, Jeff Green had an amazing game, and the bench was a huge factor. Jeff Green had a solid 17 Points and 9 rebounds, along with that incredibly clutch tip-in at the end. That tip-in alone pretty much secured him the Thunder Down Under spot. I know, some of you were pulling for him to get the Thunder Wonder, but Kevin Durant's influence can't be ignored. James Harden did his thing, racking up 14 Points and 4 Rebounds. He also actually hit a three, which is good news. Nick Collison also did a nice job, with 6 points, 5 Rebounds. He fouled out rather quickly, but that's to be expected of big men in a suns game.

You could really see that this game was suited to Serge Ibaka's tastes. Flying up and down the court, tipping the ball in, providing aggressive defense....watching Ibaka play is like a work of art, simply because you don't usually see Big Men that are that athletic. Dwight Howard is the same way, but sometimes Ibaka just looks like a god among men. Did you see that block on Stoudemire? He's like what Robert Swift and Brandan Wright were supposed to be for the Warriors. He's like the big man "project" that every team picks up, yet never works out. Except this time, he actually met and exceeded everyone's expectations! He's completely eliminated Etan Thomas from the rotation, and he's taking away lots of minutes from Krstic. I don't know, it's only been a few games, so you really can't get a conclusive conclusion. But as for right now, I'm riding the Ibaka train, and it's pretty awesome.

Eric Maynor had his first minutes of tonight, but it's hard to say how he'll be. He went 1 of 4 from the floor, and he had a really bad turnover in the second quarter. He just dribbled it inside the three point line and almost gave it away. Regardless, he had 5 assists, and I think he's working out okay so far, but as for right now, he has to receive the Thunder Blunder awards, simply because I have nobody else to give it to. Still, the verdict on him is largely TBD.

I've already revealed it earlier in this recap, but tonight's Thunder Wonder is Kevin Durant. 38 Points, 12 of 20 from the floor, 3 of 4 from 3 Point Land, 6 rebounds, 3 Assists, and the game clincher. What more can you ask from your star. He performed solidly throughout the entire night, and hardly wasted any possessions at all, through missed shots, turnovers, and otherwise. I know it may not seem like it, but this is probably KD's most offensively efficient game all year. Hats off to him. 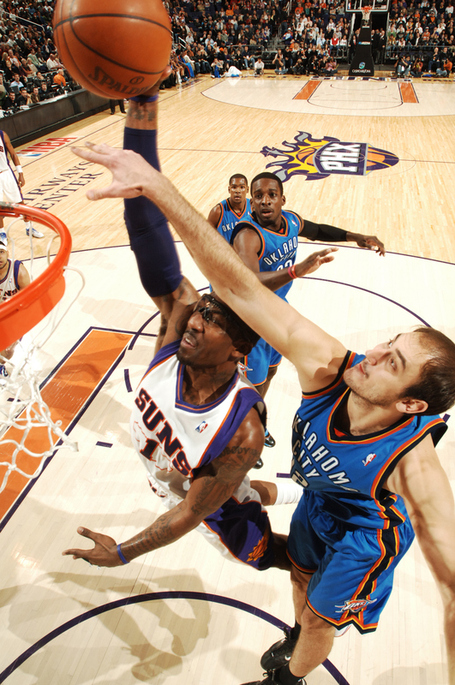 Amare: I told you guys to stay away from my shades! That's almost as bad as pissing on the rim!

On the Suns side of things, statistically, things went as expected. Their bench was totally ineffective, Jason Richardson was shut down, and Grant hill wasn't feeling it, leaving the bulk of the scoring on the shoulders of Steve Nash, Amare Stoudamire, and Channing Frye. Aside from a coupel of clutch plays from Richardson, this might as well have been a 3 person team. Amare Stoudamire, with 35 Points, 14 Rebounds, and 2 Assists, was clearly the most effective of the 3, so he gets tonight's Thunder Plunderer award. Hats off to him, as well.

On a side note, I know today and tomorrow will be a special time for some people, so whatever you may celebrate, I'd like to wish all of the Readers and Staff of this blog a very Slammin' Thursday and Friday. And a Slammin' season. Enjoy yourselves, and I'll see everyone on Saturday!

It's time to meet Stephen Jackson!