What a great game. That being said, argh!

This isn't at all the game I expected, but sometimes, I'm glad to be wrong. An incredibly intense game throughout. The game started off with both teams playing relatively evenly, but the there was something a bit different about the Lakers. They were playing lazy. They were letting far too many fast break dunks happen, and they weren't exploiting us on the inside as much as they should have. Eventually, their laziness lead to a 5 Point Thunder lead at the end of the first, a 12 point lead with 4:13 left to go in the 2nd, and a 7 Point lead at halftime.

But, if you know anything about the NBA, you know that inevitably, a third quarter collapse was coming. Immediately the Thunder started to fall behind, and everyone started to worry. But, unexpectedly, the Thunder never fell farther behind than 3 for a while, and they somehow managed to stay in the game. But, things seemed to be falling apart as they finally fell to 6 behind by the end of the 3rd, and 11 behind with 6:22 to go in the fourth. At this point, I thought the game was over, and was ready to resign myself to another Thunder loss.

But hope arose once again. Russell Westbrook got it started by getting fouled, and then James Harden had an amazing fast break dunk. Kobe Bryant responded with freethrows of his own, and then KD managed to miss his second freethrow, and after Serge Ibaka blew an opportunity for a 3 point possession, I, again, thought it was over. Then, Pau Gasol passed the ball out of bounds. I couldn't believe what I was seeing. Russell Westbrook made a mid-range jumper, Kobe missed a layup and fouled Russell Westbrook, and Russell Westbrook made 1 of 2. Suddenly, we were sitting on only a 5 point deficit with 3:55 to go. I was feeling the hope.

But then, the rays of sunshine got black again as Lamar Odom hit a clutch 3 Pointer. Game over, right? Wrong, as Sefolosha came back to hit an equally clutch 3 just as the shot clock expired. The rest of the game was essentially spent trying to beat LA's freethrows. Kobe hit two at the line, but Ibaka responded with a dunk. Kobe made a bad pass, and Westbrook responded with a jumper. It was down to three! After another Laker turnover, Sefolosha had an open three. I could see the light! 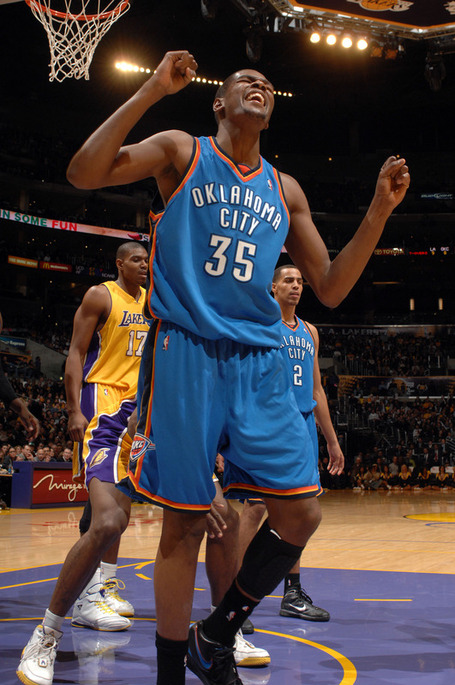 KD wanted to have an all-night dance party, but his 6 fouls cut the party short.

But no. He missed it. Kevin Durant then got some BS foul call (fouling him out), and the Lakers widened their lead back to 5. the Thunder set Serge Ibaka up for a great short, two point jumper, but he bricked it. Again, I figured the Thunder were toast at this point. But no. They came back again. Lamar Odom missed a 3, and Russell Westbrook somehow managed to run around the entire Laker defense and hit a relatively uncontested layup. Spectacular. Then, Paul Gasol committed an offensive foul, we got the ball back, and Westbrook scored AGAIN! A baseline jumper! We were within 1!

And thus, we entered the critical last 19 seconds of the game. Kobe Bryant was fouled, and the MVP chants were louder than ever. The first free throw was perfect, and so was the second. At this point, Ron Artest had some "words" for Russell Westbrook, and it's a wonder they never got into a fight. The Thunder came out of their time out....and Harden scored over Gasol! And Gasol even tried to flop! The lead was back down to 1 with 14 seconds to go, and Derek Fisher was immediately fouled. The first freethrow was rainbow perfect, and the second was shaky, but in. I really wish he was that good at freethrows when he played for the Warriors.

So it came down to the final seconds. The Thunder knew they needed a three. The ball was inbounded to Sefolosha. He handed it off to Westbrook. Westbrook worked around for an isolation 3 point jumper on the left side.....it's up...it barely rattles out. Ibaka tries to tip it in, and it falls out. Sefolosha tries a bank tip, and it falls out. Ibaka tries again, but the ball slips out of his hand, and it was too late by then, anyway. It was all over.

Sorry to bore you guys with the long game description, but this was one of the best games in recent memory, and I wanted to recap it well. We lost, but seriously, could you ask for more from a basketball game? I've never seen the Thunder or Warriors beat the Lakers, and it will be a very grand day when I do see that, but this game was still a pretty darn good Christmas present. Still, it would be even better if we beat Phoenix tomorrow!

Lets take a look at the five factors that I said would lead to a potential Thunder Victory, and see how they all turned out.

1. First of all Russell Westbrook has to exploit the Derek Fisher matchup somehow. He's done decently in the past, but I'd like to see him get to the line more often, which is kind of difficult to do gainst Derek Fisher, one of the best floppers in the league.

Success! Russell Westbrook effectively exploited this matchup by being able to spot up for easy jumpers and, at times, being able to run around the entire defense for a easy layup. It also helped in that he fouled Derek Fisher at the end of the game, and Derek Fisher is a lot less likely to hit those two free throws than Kobe Bryant is. Granted, he still hit them both, but the 2nd one almost fell out!

2. Secondly, Jeff Green needs to find his way around Pau Gasol. Not an easy task, but maybe resorting to a good amount of mid-range jumpers will do the trick.

Success! Jeff Green didn't have a career game, but he was able to have 12 Points, 7 Rebounds, and 4 Assists. That's a pretty solid game, and about as good of a game as you're going to get from Jeff Green.

3. Thirdly, Ibaka, Krstic, Collison, and Thomas all need to play out of their shoes and prevent Bynum and Gasol from exploiting us inside too much.

Success! Bynum and Gasol were limited to a combined under 50% shooting, and they only combined for 26 Points. It's nothing to sneeze at, but Bynum scored about that amount on his own in the past two Thunder games, and Gasol has the potential to do the same.

Success! 2-3 may not seem like much, but it's a definite improvement. 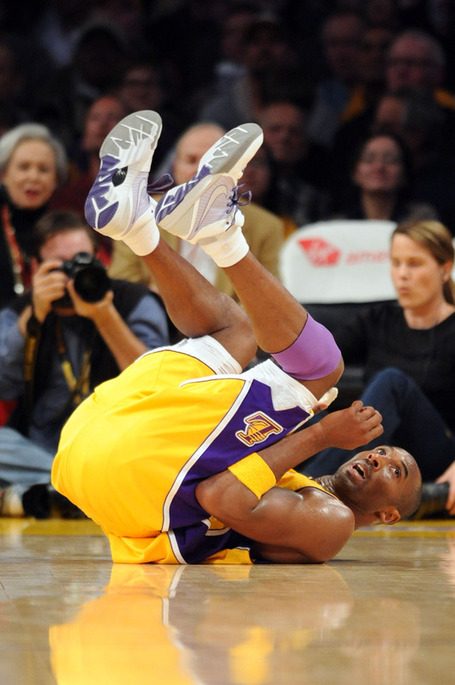 Kobe tried out some new stretches tonight. They must've worked!

5. Fifth, Thabo Sefolosha will have to have a profound effect on Kobe Bryant. I'm talking turnovers, missed shots, whatever.

Failure. Okay, he had 5 turnovers. That's not that huge of an amount when the ball is in your hands most of the time. I mean, he scored 40 Points! Turnovers, big whoop. To go along with those 5 Turnovers and 5 Fouls, he had 14-26 shooting, 12-14 Free Throw shooting, 7 Rebounds, 6 Assists, and 2 Steals. Okay, I will admit that Thabo did a good job closing out on his shots and did force a few turnovers, but Kobe resorted to lots of penetration, and it worked out for him. Great job by Sefolosha tonight, but also a Thunder Plunderer worthy performance by Kobe tonight.

If all of those things happen, we'll win. If 3 or 4 happen, winning is a possibility. If less, then I really doubt the Thunder will win.

Correct! Four of these things did happen, and guess what? Winning was a possibility, but it didn't happen. Granted, I'm no master predictor of this game, as I thought it'd be a blowout, and I'm surprised that these things happened at all. But still, man, it hurts to have lost when we were so, so close. 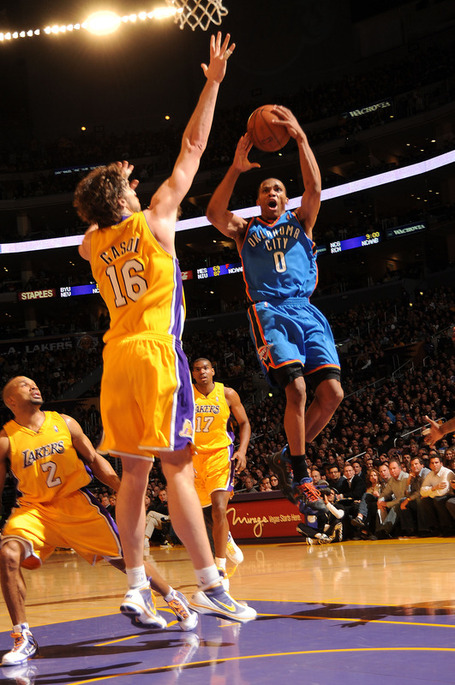 Russell Westbrook had this fierce determination all game, and it showed.

And I don't think there's any question around here who the Thunder Wonder was. It's Russell Westbrook. In the first half, he had 10 Assists, creating ball movement and keeping this team ahead. Towards the end of the game, he stepped up as KD stepped out, almost steamrolling us to victory. This was, unquestionably, his game of the year. Enjoy it, Russell....even though the Thunder lost. Heh.

And guess what? I'm giving the Thunder Down Under to Serge Ibaka! Again! If you don't like it, too bad! He was an essential part of the great defense on Gasol and Bynum. Also, he grabbed a whopping 14 Rebounds. Sure, his 8 points and 4-12 shooting was a bit underwhelming, but he didn't shoot irresponsibly, and a lot of his shots were tightly contested and in the post. I almost didn't want to give him this award from his easy jumpshot miss late in the fourth, but this game wouldn't have been possible without him. Accolades also go Sefolosha, who helped immensely defensively and offensively, Durant, who had a great game besides his turnovers and fouls, Harden, who did a great scoring job, and Jeff Green, who managed to partially overcome his lack of production against big men.

The Thunder Blunder? This one is a bit harder to pick. But, you can't really blame Nick Collison, as his objective this game was to basically put pressure on Gasol and Bynum. Rather, the Thunder Blunder for this game is going to be Nenad Krstic. He had a horrible plus minus ratio (-16) and didn't manage to defend the post all that well. He did manage to get 4 points, which was nice, but it was pretty obvious that this wasn't his game even since the game started.