Share All sharing options for: Rating the Thunder's Marketing Team: Thunder Up 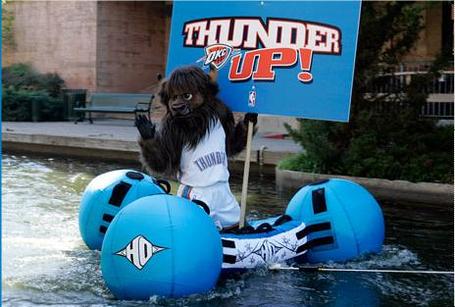 This is a piece that I hope to semi-regularly post, just to mix things up a bit in here. The Previews, Recaps, and Loud Links all get a bit old and monotonous after a while. Just think of it as adding a little zazz to the Welcome to Loud City sandwich. And don't worry, this isn't the only thing I have planned. There's more things in the pipeline, time-permitting.

The Thunder spent most of last season getting integrated with the local community and getting essential things, like the game presentation, season ticket sales, the making of the new mascot, and other things out of the way. But, Season Two has required a new strategy, something to keep the fans coming. So, what did they come up with, after lots of brainstorming?

That's right, the brilliant new strategy that the Thunder came up with for selling tickets and chanting at games is "Thunder Up". Now, don't get me wrong, advertising doesn't have to be intelligent or witty. It just has to work and make sense. I've seen successful campaigns before. Granted, more talented teams have a easier time with it. Usually, they will use a slogan that relates to the team's end goal, like "Eyes on the Prize", which was the Suns' slogan a few years back. Just looking at some teams right now, the Celtics have the slogan "Reloaded", the Cavaliers have "All for one, one for all", and the Nuggets have, "Can you feel it?" None of them are spectacular, but they all work, and they all make sense. The Celtics are reloading for a championship, the Cavaliers are referencing the musketeers while also stating that they're going for it all, and the Nuggets are stating that they're on the cusp of greatness, because you can almost feel that trophy. Okay, so that last one was a bit of a stretch, but you get my point.

Lesser teams who don't expect to have good seasons have a bit of a harder time coming up with slogans, but it's still doable. The Warriors used to use the slogan, "It's a Great Time Out!" to get people to come to games, because nobody would come to the team's games. It wasn't brilliant, but it did it's job. Again, just looking around the NBA, theNets have the slogan, "More than a game" and the Bucks have the slogan, "Work Hard. Play Hard." The Nets slogan was to advertise the fact that it's not just a game when you see the Nets, it's an experience. The Bucks slogan is saying that the Bucks aren't going to win any championships this year, but they are going to give a lot of hustle. So, as you can see, making an advertising slogan for a losing team is difficult, but not impossible.

But, all the marketing team could come up with for the Thunder is "Thunder Up"? There's just so many things wrong with it. First of all, it's not even proper English. Up isn't a verb, it's an adjective. Properly, it would be "The Thunder are going up!", but even then, it doesn't make a lick of sense. I mean, I guess you can say that the Thunder are becoming a better team, but even that is a huge stretch.

Secondly, it's not even original. The Purdue Boilermakers have been saying Boiler Up! for years. It's true. While the person who made up the phrase didn't know what Boiler Up meant and just introduced it to excite the crowd, at least they have an excuse, as "in the days of steam-powered locomotives, when the fireman got the fire in the coal box hot enough for the engine to run, he would exclaim 'Boiler's up!'" (PurdueSports.com) There, they have an origin for their nonsensical phrase. Here, it doesn't make any sense, and it's downright plagiarism. I know that there aren't a whole lot of original concepts left in the world, but honestly, do you know of another team that uses this slogan?

Thirdly, the slogan is embarassing. When another team's fans are coming to the Ford Center, or, say, I'm invading their arena, they might say something to me in their local teams chant. All I can find myself saying back is, "Go Thunder!" What, you really want me to say, "Thunder Up!"? I feel like some sort of cowboy telling other people to "Giddy Up!" or "Saddle Up!" I'd be immediately laughed out the door, as if that wasn't already difficult enough to avoid.

As I'm sure you can tell, I really don't like this logo. You could list the positives to me, like the fact that it's easy to say, or the fact that it symbolizes how the Thunder are rising up to the top. I'll hear you out, but it would be really hard to change my mind. This slogan sounds dumb, doesn't make sense grammatically or ideally, is embarrassing to say, and is just plain plagiarism of Purdue. I rate it a 1 out of 10, with the only reason that it gets one is the fact that it's easy to say, and can be portrayed as making a sliver of sense. It fails as a marketing slogan, and as a chant.

But, don't let my opinion stop you from voicing yours! What do you think of the slogan? Vote in the poll or drop a comment! Insight and opinion are always welcome, whether different or the same!