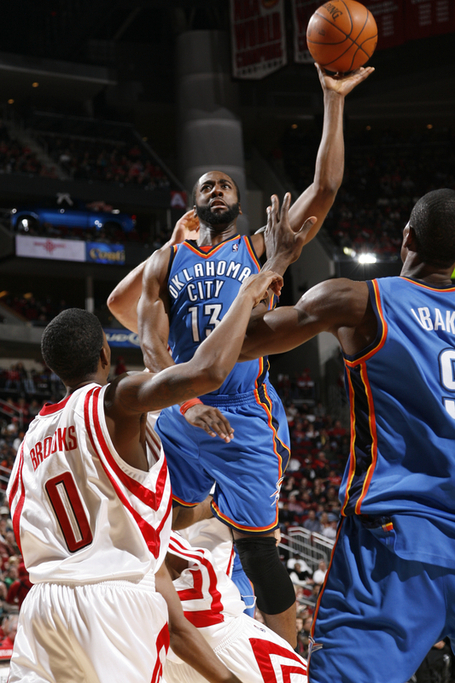 I like to call this one "The Statue of Liberty".

Note: I just realized the very beginning of this article is pretty arrogant. If it seems so to you as well, pleas ignore it and move on. I guess they were just the first two things on my mind.

Yet again, my prediction is only 2 points off! (I predicted it to be 97 to 90, albeit after the first quarter.)

Regardless of that, the Thunder lost, yet again, to the Houston Rockets. It's no surprise to me, as I declared the Thunder would not beat the Rockets this season (including our next and final meeting on March 24th). But what did surprise me is the manner in which it happened. I made the 97-90 prediction thinking that the game would end on a ho-hum note, with the Thunder down by 12 and then throwing in 5 points at the end just for the heck of it. But here, the Thunder made a legitimate run for it, and should have had a decent shot to win it, barring a couple of rebounds at the end of the game.

But, I'm getting ahead of myself. The name of the game for the Thunder on this night was "catch up". Nearly the entire game was spent behind the Rockets. There was a brief 34-31 lead with 6:01 to go in the 2nd, but other than that and the early minutes of the first, the Thunder were behind the entire time. And things were always looking grim. It seemed like every time the Thunder took 2 steps in the right direction, they'd take 3 steps back, and then all of a sudden, Houston would hit a 3 and say, "Boom! In your face!". This was especially emphasized in the 4th quarter, where every time the Thunder got within a 3 or 4 point deficit and you thought, "Man, this might get interesting!", the Thunder fell flat on their faces and got nay-sayed by Trevor Ariza or David Andersen. There were a lot of missed Golden opportunities in this game, don't get me wrong, but the most obvious to everyone was the one at the end of the game, and it pretty much summed up the entire game in 64 agonizing seconds.

After a HUGE second-chance 3 by KD to put it within 4 with 1:04 to go, the Thunder needed a stop. The Rockets dribbled the ball around, making sure not to shoot too early. Then, Aaron Brooks goes for the corner 3....and misses it. The rebound is tipped right out of Jeff Green's hands by Aaron Brooks, and the Rockets get to reset their offense. After a lot of holding, Trevor Ariza takes a spot up jumper, and it misses. The rebound goes right out of the hands of Westbrook and Durant and into the arms of Chuck Hayes. Aaron Brooks is finally fouled, and he misses the first freethrow, opening up a not-deserved opportunity. Then, Durant and Harden miss 2 good-looking threes, and the game is over. Yikes.

Well, the one positive you can take from this game is the fact that the Thunder actually put up a fight. But, even though the score was different, the stats still tell the same old, sad story. The 3 Point Shooting was non-existant. Thabo Sefolosha did horribly defensively. Trevor Ariza bulldozed. What else is there to say? 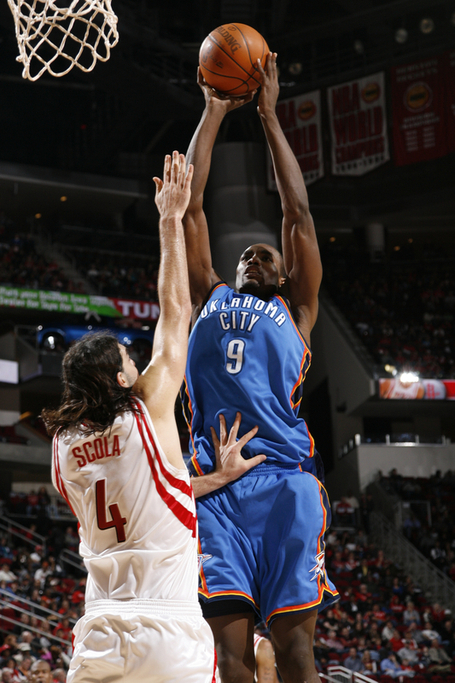 Ibaka puts up another strong performance.

The Thunder Wonder for this game is Jeff Green. Yeah, he pretty much failed to show up in the fourth quarter, but he carried the Thunder through a lot of the game, and, compared to the other Rockets games, this one was a drastic improvement. 21 Points, 8 Rebounds, and 3 Assists in 39 minutes complete his night. The Thunder Down Under is Serge Ibaka. Okay, I know I've been riding his bandwagon a lot over the last couple of recaps, and I tired to avoid it tonight, but there was no way around it. He was extremely efficient considering the minutes he got, and he helped out the scoring during an especially desperate time in the 2nd quarter and helped to ignite the run at the beginning of the fourth which got the Thunder within winning range. 10 Points, perfect 5 of 5 Shooting, and 8 Rebounds in 23 minutes. What more could one possibly ask? Accolades also go to Westbrook, who had a solid 15 Points, 5 Rebounds, and 7 Assists.

The Thunder Blunder is unquestionably Kevin Durant. 13 Points and 6-18 shooting isn't terrible, but it's pretty darn bad. I mean, 1 out of 5 3 Pointers? Really? You're our clutch shooter? In a night where all of the pieces were in place for a Rocket upset, the Thunder's main pillar crumbled. If he would have had a good day, there's a much higher chance that the Thunder would have won. Thabo Sefolosha doesn't escape blame either. 4 Points and 8 Rebounds are nice, but he's let Ariza destroy the thunder night in and night out. 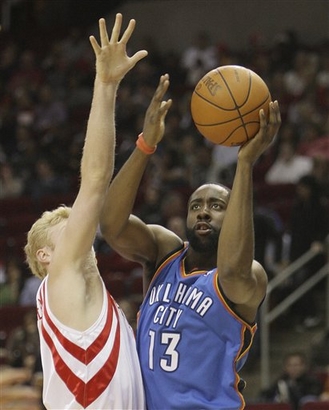 There was a comment in the Dallas thread saying that I didn't talk enough about James Harden. Well, in my opinion, there's not a lot to talk about. His effort will look decent, as he'll add around 10 Points, 3 Rebounds, and 3 Assists every game. But, the big hole in his game that needs to be fixed is 3 Point Shooting. Sure, he'll have a game where he'll go off and make 4 of 6 or 6 of 7, but usually his statline comes out as 0 of 3, 0 of 2, 1 of 4. If he's going to be taking 3s, he's got to make them, especially on the Thunder, who are a horrible 3 Point Shooting team. Look, I know he's a rookie, and I know he's done well considering that fact. But the thing this team needs is a consistent 3 Point shooter, and I wish he'd bring that to the table on a consistent basis, rather than on the occasional off-night. So, he'll be good enough to escape the Thunder Blunder, but not good enough to obtain a Thunder Wonder,Down Under, or recieve further mention. Thus, I don't mention him very often.

And....Ariza, Ariza, Ariza. Arriba! Once again, he captures the Thunder Plunderer Award. 31 Points, 11-20 Filed goal Shooting, 5-8 3 Point Shooting, 8 Rebounds, 6 Assists, only 1 Turnover, and 2 Steals. Honestly, I had no idea he was capable of such numbers. Major props to the guy for conquering the Thunder night in and night out.