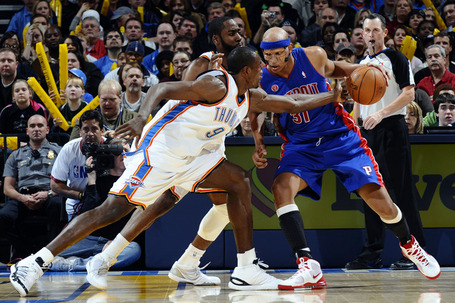 Ibaka: Yes, that ball IS mine!

We got to see Weezy once again, and successfully took care of the one easy game among this 7 game nightmare. I'd call that a good day at work.

But, it didn't start very well. Detroit's opening basket was made by our old comrade, Chucky Atkins. That eventually sparked them into a 14-6 lead, lead by Rodney Stuckey. Predictably, he had a great game, because the Thunder don't do well against good penetration. The Pistons got the lead all the way up to 10 points, as they lead 22-12 with 3:57 to go. But the Thunder responded strongly by recovering to get within 3 by the end of the quarter. Most of the points were made on penetration plays, but that's due in large part to the fact that Ben Wallace was out of the game.

The 2nd quarter was pretty even, as the Pistons managed to keep their lead until Jeff Green captured it from them with 6 seconds to go. In fact, he had 9 points in the last 3 minutes of the 2nd, largely accounting for our ability to take the lead.

From that point on, the Thunder only lost their lead once. The Pistons managed to tie it late in the 3rd, helped a lot by the fact that Ben Wallace was there to clog the lane again. The lead was only back up to 4 by the end of the 3rd. But, like a knight in shining armour, James Harden was there, making 7 points in the first two minutes of the 4th. After that, it was just a stagnant game of back and forth, with the Thunder running up the score at the end in order to make themselves look good.

As far as the analysis goes, there's really not much bad to find in this game. We had great shooting almost universally on our team, and those on the team who didn't shoot well made sure to take care of business at the line.

And, surprisingly....Jeff Green actually did a halfway decent job against some solid big men! Granted, he's undoubtedly played against Weezy many times, and Weezy is allergic to defense, but Jeff Green also had to fight through Jonas Jerebko, Jason Maxiell, and Charlie Villanueva. I know, they're not exactly the defensive all-stars, but they're all pretty legitimate, so it's definitely a step in the right direction. 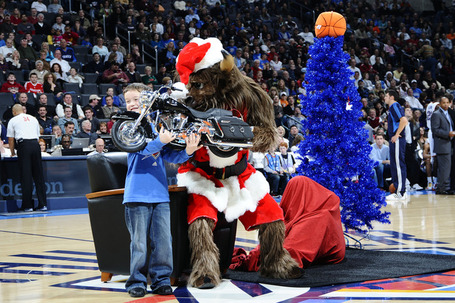 As just one of that night's many festivities, Rumble decides to surprise a kid by giving him a....totally unusable model motorcycle? I'm as puzzled as you are. He can't ride it, and it's too big to store in his room. Hmmmm.... Still, a nice gesture.

It was also nice to see some of our old players again. I didn't hear many claps for them in the arena, but a few people seemed to remember Weezy quite well. He's since lost his braids, so he kept reminding me of Rasheed Wallace, which kind of freaked me out. But he met his old teammates and gave props to Rumble after the game, so you know he's a super cool dude. It's also nice to see him being semi-productive for once, getting 8 Points and 4 Rebounds in 18 Minutes of play. Chucky Atkins didn't do much but miss shots and commit fouls, going 1 of 5 and netting only 2 points in 22 minutes. But, he's in the twilight of his career now, and seeing as how he was guarded by Thabo Sefolosha, he didn't do terribly bad.

The Thunder Wonder....goes to Serge Ibaka. I know, he wasn't the best guy out there. There's just so many places in this game where you could say that x player saved us at this point or y player saved us at that point or z player helped us out through tough times. But Serge Ibaka has improved his game so much since the start of the season that I've got to give him this award at least once. I didn't even know if he'd be usable at the start of the season. Heck, I wouldn't have been surprised if he went back to Europe next year. But now, I realize that he's working his way into being an essential part of this team. A career-high 12 points and solid 5 rebounds in 22 minutes round out his fantastic night. 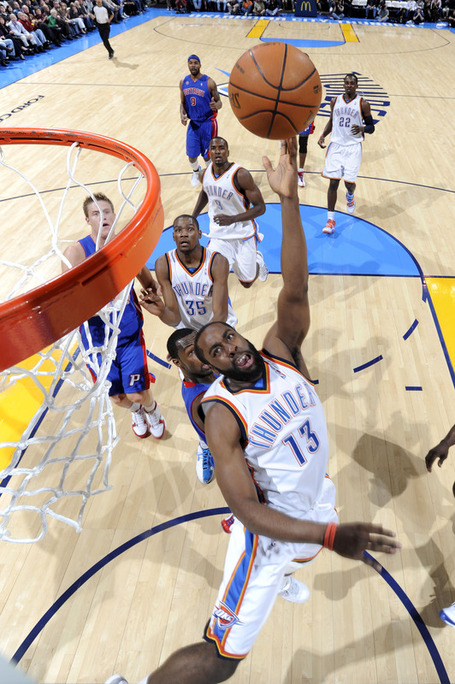 James Harden, furious at the ball, screams at it while telling it to "Get in there!" KD looks on, completely stunned.

The Thunder Down Under Award has to go to James Harden. I know, Kevin Durant had a great game, and Jeff Green helped us out of a jam towards the end of the first, but James Harden had an essential 7 points at the beginning of the fourth, and he has an insanely high plus/minus ratio (+19). He ended up with 14 Points, 3 Rebounds, and 8 Assists, which is the stat line that we all hope to see more often from this man.

The Thunder Blunder was, well....Shaun Livingston. I know he did an admirable job, but he's just about the only guy who put up a whole lot of zeros on this night. Hey, somebody has to win it! 2 Assists, 2 Blocks, and 2 Fouls in 20 Minutes recap his night.

Ben Wallace did help the Pistons out a lot defensively, but his defense didn't help a whole lot in the fourth. He did do a good job, and would get a Thunder Plunderer Down Under award if there was one, but the award has to go to Rodney Stuckey. The guy simply was the Pistons tonight. He's no Point Guard, and he's probably less valuable than Ben Gordon, Tayshaun Prince, Rip Hamilton and Ben Wallace. But through all of the injuries, he's been a nice shred of consistency for the Pistons. A season high 31 Points, 5 Rebounds, and 3 Assists in 37 minutes complete his superb outing.

Next Game: At the Rockets, Saturday, December 19th, 7PM CST