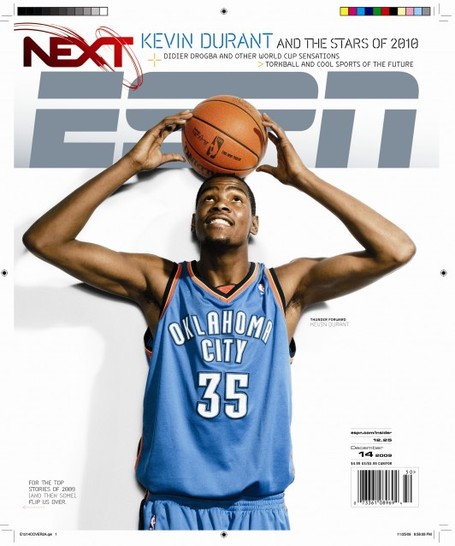 Kevin Durant Next - ESPN
[Durant has been named "Next" by ESPN. Watch out world here we come!! Click the link and read the .PDF article.] Before he signed his sneaker deal with Nike, Durant turned down an offer from Adidas worth $70 million. "That’s a lot of money," he says. But when it came right down to it, he just plain likes Nikes better. He grew up wearing them, and they felt good on his feet. The deal made him happy. For him, it wasn’t a function of addition; it didn’t come down to logic. It came down to hunch. It came down to gut. It came down to instinct. Not a killer’s, but a kid’s.

As Thunder rookie James Harden puts it, "If you grow up too fast, what’s the point? Kevin’s not childish. He’s just different. He just likes to have fun. He’s young, man. We’re all young. But we’re learning when we can joke around and when we have to be serious." Learning the difference between joking and serious, between consistent and dominant, is this season’s homework assignment for Durant.

NBA.com: Durant on big expectations, being skinny and Beyonce

[Who ordered the KD love-fest? NBA.com asks KD some great questions in this lengthy Q&A.]

NBA.com: How do your teammates treat you now that you have a semi-celebrity status?

KD: I put myself on the same level as everyone else. From the first man to the end of the bench. Nobody has a "celebrity status" attitude here. Especially me. I always put the team first and without them I surely wouldn't be the NEXT athlete or talking to NBA.com for articles. Once I step into this building for practice and games, it's all about the team.

NBA.com: Would it be easier if there were fewer expectations for you and you could be a sleeper player in the league?

KD: Either way it's cool with me. I like being the underrated and sleeper guy, too. However, people started recognizing me and it feels good as well. As long as I handle my business here every day as a professional I will have no regrets.

NBA.com: The most constant criticism of you since you were drafted in 2007 is that you're too skinny and need to build muscle. Are we going to see Durant 2.0 with more muscle, or is this wiry frame what we will be working with for a while?

KD: I'm trying my hardest just to get there. It's tough. I'm a lot skinnier then other people, so it's tough for me to make it look like I'm stronger. I feel like I'm getting a lot stronger and bigger. Ask anybody in the organization. Hard work will take care of my fame. In a way, me being skinny makes me who I am and a lot of people are getting used to me being skinny. It's kind of unique that I can say I'm the skinniest guy in the league.

Suns, Kings likely to see early success even out over season | SI.com
The flashy stat in OKC may be Kevin Durant's 27.4 points per game, behind only Carmelo Anthony, Kobe Bryant and LeBron James among the league leaders, but the better story is that Durant is playing 80 percent of the minutes for a team ranked fourth in the league in defensive efficiency and fifth in points allowed per game. It's a limited sample -- Durant has only been off the court a total of 154 minutes thus far this season -- but the Thunder allow just 99.1 points per 100 possessions when KD plays compared to 115.4 points per 100 possessions when he doesn't. Throw in significant jumps, for the second straight year, in Durant's rebounding and assist rates, and even persistent critics like yours, truly, have to concede he's a budding MVP candidate. More to the point, the Thunder's upgrade on defense this season (they were 23rd in points allowed last year should forestall long losing streaks. Factor in a rough early gauntlet that has already included two games apiece versus the Lakers and the Magic, and quality wins over Orlando, San Antonio and Utah, and Presti's rebuilding job, ably abetted by coach Scott Brooks, looks to be a year or two ahead of schedule.

Thunder’s Mike Wilks is well-traveled | NewsOK.com
It wasn’t to be for Wilks, the 5-foot-10 point guard who the Thunder signed Thursday out of desperation. Wilks played his college ball at Rice, went undrafted in 2001 and has spent the past eight years journeying the country in search of a job. Wilks is a walking stopgap to Oklahoma City’s injury-ravaged roster. Backup point guard Kevin Ollie will miss up to four weeks after undergoing surgery on his right knee. Third-string point guard Shaun Livingston also is healing from knee surgery and might be sidelined at least another week. And Kyle Weaver, a natural shooting guard who can fill in as an emergency point guard, is on the shelf at least four months after surgery to repair damage to a dislocated shoulder. All told, it creates an attractive opportunity for a player such as Wilks, the quintessential NBA journeyman. Wilks, 30, is now on his 11th team in seven seasons. In Oklahoma City, Wilks is that storybook character who was sitting at home before a pro franchise came calling for his services. "I’m just thankful that they thought enough of me to bring me in," Wilks said.

The Associated Press: Thunder guards Ollie, Weaver have surgery
The Oklahoma City Thunder says guard Kevin Ollie underwent successful "minor" surgery Monday to relieve pain in the patellar tendon in his right knee. Ollie has missed three games with the injury and is expected to be out up to four more weeks. Another Thunder guard, Kyle Weaver, also had successful surgery Monday on his separated shoulder, an injury he suffered last week during practice. The team says his rehabilitation will last at least four months. Oklahoma City center Nenad Krstic missed his first game of the season Sunday with soreness in his left Achilles tendon and forward Nick Collison missed his fourth consecutive game with a sprained knee. Guard Shaun Livingston has been sidelined following arthroscopic knee surgery two weeks ago, but practiced Saturday and participated in the team's practice Sunday.

Awards Watch: Kobe on top - ESPN
MVP #10. Kevin Durant, Can Durant win MVP? Not this season. But he deserves props for having the Thunder in position to challenge for a playoff spot, while taking the next step toward stardom. (Last week: NR | Team record: 9-8)

ROY #3. James Harden, Thunder: He is getting more comfortable in the Oklahoma City offense and has scored in double digits in five of the past six games. When he plays at least 20 minutes, he has produced.

THUNDER: Journeyman Wilks thankful for what he's got
"It’s a faith walk, man," Wilk said. "Everybody has different paths in life. I know a lot of guys dream that they’re going to go to the big-time school, get drafted in the first round, get drafted into the NBA and be an All-Star and be all of those types of things. But everybody has a different path. Mine wasn’t, but I wouldn’t trade my path for anything else in the world because it’s through that God has used to build character in me, and I wouldn’t be the person I am today had everything just come to me. "So I appreciate it, and despite how difficult it can be at times I’m blessed, man. The good far outweighs the bad. I have a beautiful family, I’m healthy, and just to have the opportunity to play in this league one time is a privilege, and there’s so many guys, there’s millions of people who have the talent but they just never get the opportunity. It’s something I don’t take for granted, and that’s what I have to focus on when it gets hard, when you’re here, when you’re there. Everybody would like to be on a team for a number of years, get a guaranteed contract and all that. But at the end of the day I’ll take it. It’s not what I would have wrote myself, but I’ll take it."

Grading the Coaches - West - Basketball News & NBA Rumors -
Scott Brooks - Oklahoma City Thunder After a start to the season that many were surprised by, the Thunder seem to have hit their first hurdle of the season. Injuries have started to pile up – Nenad Krstic, Nick Collison, Kevin Ollie, Shaun Livingston, and Kyle Weaver are all battling injuries at the moment and the Thunder will be challenged in the last three games of this five-game homestand. Brooks has his squad fighting in each and every game no matter who or where they're playing, as is evidenced by OKC's 5-4 record on the road (impressive for a young, developing team), a tough loss to the Lakers and a win against the East-leading Orlando Magic, both at home. Brooks is the main reason Russell Westbrook has improved as much as he has since he was drafted and Kevin Durant's offensive game is starting to reach the next level as well. Lastly, Brooks has done well in integrating new back-up PG Ollie, who needs minor knee surgery, and will now be faced with the same challenge with recently-added guard Mike Wilks. Grade: A -

NBA Insider: Nine predictions for the rest of the season | OrlandoSentinel.com
The Oklahoma City Thunder will make the playoffs: The Houston Rockets have been one of the league's most pleasant surprises, starting the season with a 9-8 record. But Kevin Durant, Russell Westbrook and the Thunder will overtake the Rockets and clinch the West's No. 8 playoff seed.

Hardwood Paroxysm " Blog Archive " Missing Kevin Durant
So I think it’s pretty clear from Twitter and the blog and all how much I watch of the league. I watch a lot. Not a Dwyer amount. But a lot. I’ve seen all 30 teams at least six times by now, most way more than that. And I watch the Thunder more than usual. You want to know something bizarre? I’ve only seen Durant score, like, five field goals. No kidding. It’s just one of those things. I’ll have the game on and someone on Twitter will say something funny, or the dog will need to go outside, or the wife will holler to remind me of item number 8,795 on my to-do list, and then I’ll look up and just hear "Kevin Dur-ANT! Wow!" or some variation thereof. And now and again I’ll rewind it to see it, but usually I just say "Oh, I’ll catch it next time." Except I don’t. I just keep seeing his pull-up threes that clang or turnovers. So to me, Durant has played like crap this year. Which is, of course, absolutely not true, he’s been sublime.