Share All sharing options for: Game 22: Cleveland at Oklahoma City

This also counts as an open thread, so feel free to post your thoughts during the game here.

Backstory: But first a disclaimer.

When it comes to Thunder basketball, I am an eternal optimist. Positive thought equals positive results, right? So being unbiased is a rough task for me. After the Thunder defeated the Orlando Magic, I feel OKC proved that they can beat any team. So let's continue with the task at hand.

The Cavs added Shaq to their roster in order to "Bring the King a ring". With the extra strength inside somehow the Cavs have already tallied up seven losses. Not to mention losses to teams that the Thunder have already defeated (Washington & Memphis). So should we be encouraged? I'd say yes. Plus we all know that KD and the boys like to step up to the top teams in the league.

Of course Cleveland has plenty of bigs that can contend with our paltry front court. So expect Krispy to jump start his jump shot in hopes to pull the Shaq away from the basket. Cleveland also has a nice outside game that OKC has to be aware of. Expect some nice cuts to the basket by Williams and Lebron. In order for the Thunder to pull this one off shots have to fall and rebounds must be collected.

Since, I'm always bouncing about the internet here are a few more thoughts about the game:

Cavs Hit the Road, Travel to OKC | King James Gospel | A Cleveland Cavs Blog
Cleveland’s starting shooting guard Anthony Parker played basketball in Israel for Macabbi Tel Aviv before entering the NBA and is very accustomed to the celebrations of Hanukkah. And AP comes out hot right from the opening tip. Parker picks up four of LeBron’s seven first quarter assists and pours in 12 early points to lead the Cavs to an early 14 point lead. Cleveland withstands a late second quarter run by the Thunder and goes into the locker room with an eight point advantage, 54 – 46.

The King takes matters into his own hands to start the third quarter and pours in 8 consecutive points and finished the quarter with a game-high 27. After sitting the first six minutes of the fourth quarter, James checks back in with his team 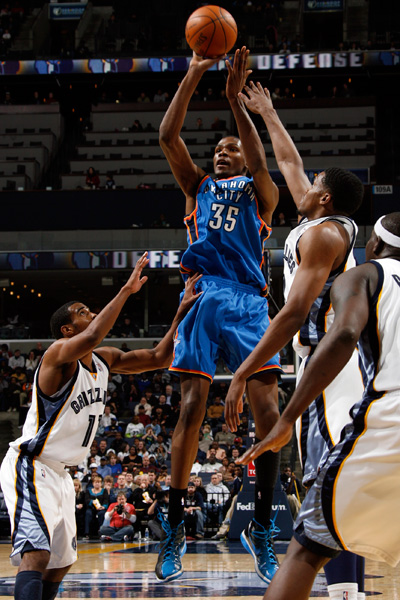 clinging to a four point lead. Kevin Durant tries to steal the King’s throne but LeBron matches him point-for-point. Jeff Green cans two from long distance in the last two minutes and the Cavs trail by 2 with 11 seconds.

LeBron takes the inbound pass from Delonte West and dribbles to his right. Anderson Varejao levels Green on a screen but LeBron runs out of room at the foul line. He swings out to Mo who feeds Parker with a touch pass in the corner. And Anthony Parker celebrates day three of Hanukkah with a game winning tre. Cavs win 103-102.

Cavaliers-Thunder Preview - STATS Senior Writer - NBA - Sporting News
The Thunder are three games over .500 for the first time since 2004-05, when the team was based in Seattle and finished 52-30. Oklahoma City, the second-youngest team in the NBA, has reached 12 wins after needing 50 games to accomplish that feat last season. "They have a very, very good young (group) of basketball players that love to play the game of basketball," James said. "We are looking forward to the challenge. It is going to be a good road test for us against a young, explosive team in their home building, and we have to come out with the same fire we did in the second half (Friday)."

Star Power: Comparisons grow between Kevin Durant and LeBron James | NewsOK.com
At first glance, it’s easy to think LeBron James and Kevin Durant aren’t in the same league. Simply suggesting the two players are seemed silly this summer when the connection first gained steam. Durant’s Thunder was coming off a shameful 23-win season. James’ Cavs, meanwhile, were fresh off yet another deep playoff run. But the comparison now seems credible as the two meet for the first time this season tonight inside the Ford Center. Durant, in his third season, is blossoming into the star many projected him to become and has his Thunder off to a surprising 12-9 start. Durant also ranks fourth in the league in scoring, sitting .1 point ahead of James.