Seattle Post-Intelligencer: NBA
[Looks like a win for our franchise was way over due.] The victory is the Oklahoma City franchise's first over Orlando since January 11, 2006, when the team was still located in Seattle. The Magic had swept the two-game series in each of the last three seasons. [Dwight didn't play very many minutes last night. Did Dwight get benched because of his teams horrific third quarter. BTW - Why is the Magic blog call Third Quarter Collapse?]

Thunder 102, Orlando 74 | Thunder Rumblings
[Everyone contributed to this win. The team had 27 assists!!! There was three players that had at least 5 assists.] "We were making our shots, but we were making our shots because we were passing the basketball," Brooks said. "We had 27 assists. That’s great basketball. We had some bad offensive basketball when we had six assists the other night and 15 a couple of games later. We have to move the ball. We have to keep everybody involved. Five guys need to feel a part of it because that’s what it’s going to take on both ends of the floor."

Oklahoma City Thunder following plan for success | NewsOK.com
[Winning over a team that is suffering through injuries is to be expected. Sadly, my fantasy team could tell you all about it. A win is a win, right?] "That’s part of being a good team," said Shaun Livingston, "winning games you’re supposed to win. Whether that’s taking advantage of other teams being down or hurt or not having certain guys, those are opportunities good teams take advantage of." And it would be naïve to think that mounting wins, regardless of the opponent, doesn’t impact morale. "Any victory can get your confidence up, no matter who it’s against," Green said. "The way we played today, the way we executed and the way our defense was, I think this was a great game for us going into these two games on the road and further on."

Orlando Magic fall to Oklahoma City Thunder -- OrlandoSentinel.com
It's one thing for the Magic to be routed by the Oklahoma City Thunder 102-74 on Sunday night at Ford Center. It's another thing for Howard to suggest the Magic (5-2) retired early against a team that is improving, but one that won just 23 games last season. Howard showed no anger. He was singing some song as he sprayed a cloud of cologne. Nobody turned over a table in the middle of the room that offered chicken and mixed vegetables. "It doesn't seem to bother anybody in the locker room," Coach Stan Van Gundy said. [Chicken and mixed vegetables... I'd lose to the Thunder for some chicken.]

Thunder notebook: Russell Westbrook mixing scoring with passing | NewsOK.com
Westbrook’s priority had previously been to set up his teammates and control the pace of the game. But Westbrook’s aggressiveness at Houston signaled the balancing act the second-year point guard is trying to master between looking for his own offense and getting others involved. "He has to continue to work on that," said Thunder coach Scott Brooks. "It’s a fine line, but it’s an important line for him to push at all times. He has to attack. We don’t want him to be a passive point guard."

NBA At 2: The Unsung Hero In OKC
[Sefo's defense is discussed by Hoopsworld. Kobe Stopper has a nice ring to it.] "I wouldn't declare him as the Kobe stopper," laughs Thunder head coach Scott Brooks. "We don't want to burden him with that label, but you know what? He competes. He has the mentality that he's not embarrassed if a star player scores on him. He reboots the computer and keeps getting after it. A lot of players don't want their man to score, and if they score they feel like they can't guard him next time down the floor. Thabo guards his man the next time down the court just as though he didn't score the last time. I think he has the mindset, the athleticism, and the length to be a good defender. He has a chance to be one of the better defending perimeter guys in the league."

THUNDER: Practice Report: Thomas and Collison Provide Punch Off the Bench
Six games into the regular season, and Thunder veterans Etan Thomas and Nick Collison have developed a strong chemistry coming off the bench. Thomas and Collison, the two front court players in the Thunder’s nine-man rotation, combined for 10 points and 10 rebounds in Sunday’s 102-74 win over the Orlando Magic. "We feed off each other," Thomas said. "We’re both physical, we both go to the boards and they’ve got to pick one person to block out. Sometimes I just bang a couple guys and he’ll get the rebound. That’s good for the team. We feed off each other." Thomas and Collison have provided the Thunder with a dynamic off the bench that wasn’t there last season. A year ago, Collison played out of position at times at center, while Thomas was still with the Washington Wizards. Thomas has become one of the Thunder’s most physical players this season, and has brought toughness and attitude to each game. Collison, meanwhile, has been able to play mostly at his regular power forward spot, where he’s continued to do the intangibles.

THUNDER: Recapping the Thunder’s 102-74 Win Over Orlando
How about Nenad Krstic? The Serbian center goes 4-for-5 from the field in the first quarter, dislocates the pinky finger on his left hand, gets it fixed and returns to score six more points, finishing with 14 points on 7-for-12 shooting. Being that he’s such a spot-on shooter, the Magic had to respect that. And that meant Dwight Howard having to leave the cozy confines of the paint to challenge Krstic’s shot.

More than just an athlete: Thunder center Etan Thomas is committed to a life outside the NBA | NewsOK.com
Lakers guard Derek Fisher is president of the NBA Basketball Players Association. Thomas is one of eight players on the board that will negotiate a new Collective Bargaining Agreement with owners before the current deal expires in the summer of 2011. "Etan is a rare jewel," Fisher said. "He’s committed to life outside the NBA. Etan believes there’s a higher purpose, a higher power. He’s committed to using this platform to influence young people and impact lives that will transcend any contributions he has on the court."

Here are five good reasons to track the OKC Thunder -- OrlandoSentinel.com
[This article discusses why you should be following the Thunder.] As their young stars grow up, the Thunder (2-3) are improving faster than any other team in the NBA. They took the Los Angeles Lakers to overtime at home last week. A win over Sacramento was the team's first season-opening victory since the organization moved to Oklahoma from Seattle. While they won't contend for an NBA championship or a conference championship this year, the franchise will no longer represent a pushover to opponents.

Superman meets Lex Luger | Dime Magazine
[Somebody has watched too much WWF... or whatever they call it nowadays.] Although Dwight Howard was the one guy on the Magic who didn’t look like he should give his paycheck back after last night’s embarrassing loss to Oklahoma City, that didn’t stop the Thunder announcers from using Dwight for a punchline or two. "Superman has met Lex Luger tonight," joked commentator Grant Long. His broadcast partner came in for the correction ("Lex Luthor") but Long had made his point: Orlando looked nothing like a championship contender on Sunday, their second such alarming performance in the last four games. While Kevin Durant (28 pts) was getting velvet hoops on everybody trying to stick him, Russell Westbrook (17 pts, 10 asts) looked like the PG we all expected to see this season, and Nenad Krstic was sticking jumpers on Orlando’s soft D, the Magic couldn’t buy a bucket. They didn’t crack 60 points until midway through the fourth quarter and seemed like they were down by 30-something most of the second half.

Thunder-Kings Preview - Nov. 9, 2009 - NBA - CBSSports.com
[I'm looking forward to Tuesday's game against the Kings. Could we be 4-3 soon? I'd say yes.] Martin will miss at least two months with a broken wrist, but Evans may already be ready to step into a leading role for Sacramento (3-4). After scoring 32 and adding seven assists in a 104-99 win at Utah on Saturday, the 6-foot-6 point guard scored 23 and grabbed eight rebounds Sunday as the Kings beat Golden State 120-107. "Honestly, I don't want to go overboard about a guy who's just played his seventh game but sometimes we just drop our mouths at some of the plays he makes," first-year Kings coach Paul Westphal said. "He's a very special player." Evans, the fourth overall pick in the 2009 draft, was 5 of 16 from the field and scored 10 in a season-opening 102-89 loss at Oklahoma City on Oct. 28. 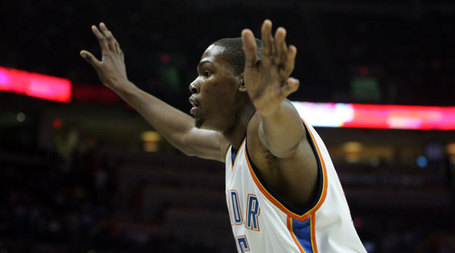