No joke. There's not other way you can put this game. The Magic were missing two key players in Vince Carter and Rashard Lewis. As a result, they became a broken team without its two main scorers, and when you can't find anybody to pick up the slack, you end up losing. And losing badly.

Granted, we really should have won this game, and we were facing a broken team, but you can't help and be proud of our guys. A 28 point win? If you told me that a year ago, I'd ask if everybody on the Magic had been shipped off to Russia.

It all started with a great Thunder run at the end of the 2nd, with a lot of scoring by Westbrook and Durant. The Thunder were only ahead by 9, but they opened the half with a 18-5 run. After that, the Thunder never looked back, and it was garbage time.

Among the very little bad news of tonight is the complete shut down of Jeff Green. 9 Points, 4-7 Shooting, 4 Rebounds, and 6 fouls in only 22 minutes. Hopefully we're only seeing a minor lull in his production, but until I';m proved otherwise, I'm gonna make him tonights Thunder Blunder. There's no reason to get fouled out in a blowout like this one.

But, back to the good news. The Thunder dominated the 3 Pointers tonight. 9-16, with Sefolosha a perfect 3-3, Westbrook a cool 3-4, Green with an okay 1-2, and Durant with a mediocre 2-6. They were left open beyond the line all night, with very little perimeter defense being offered by the Magic. As far as field goals go, we were 40-70. I'll take that any night. 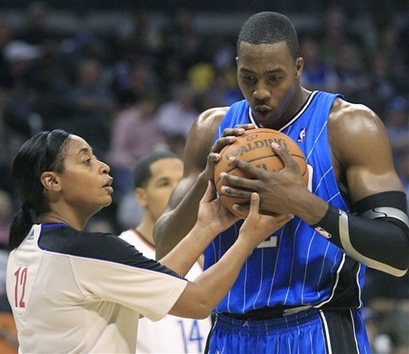 Comeon, now I just need you to fly into the hoop more often....please? I'll give you some extra air....

And guess who got double doubles tonight? Nope, guess again. It was Russell Westbrook and Thabo Sefolosha. Westbrook had 10 assists, which is no surprise, but Sefolosha got 10 rebounds. Why? Well, let me put it simply: The Magic play one big man. One. It's always either Howard or Gortat. If they can't grab the rebound, it's probably going to fall into enemy hands, because their athletic forwards can't rebound worth a darn. Luckily, pretty much everyone in our lineup can rebound (except Krstic, ironically), leading us to outrebound the Magic by 15.

Individually, you have to credit Thabo Sefolosha. 13 Points on 4-6 Shooting, 3-3 3 Point Shooting, 10 Rebounds, 2 Assists, 2 Steals, 1 Block, and a complete shot down of J.J. Redick, who had only 5 Points on 2-11 Shooting. It's easily enough to get him the Thunder Down Under award for tonight, and it would be enough to get him the Thunder Wonder award on some other nights, but tonight, that award goes to Kevin Durant. Just another beastly night for him, as he had 28 points, 4 Rebounds, 5 Assists, 3 Steals, and 1 Block. A nice defensive effort to go with his offensive one, altogether making for a huge reason we blew out the Magic tonight.

There wasn't a huge amount of scoring from the bench tonight, but Etan Thomas had 6 Rebounds, James harden had 4 Rebounds, 5 Assists, and 1 Steal, Nick Collison had 4 Rebounds and 2 Assists, and Kevin Ollie, as usual, didn't screw it up and helped ball movement. This is the type of performance you want to see from your bench. 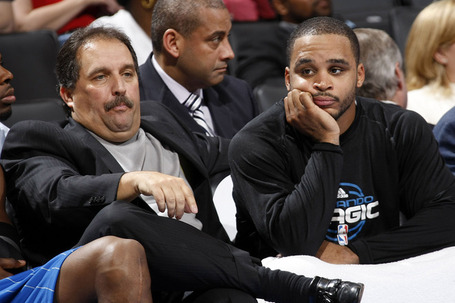 Pay no attention to us, we're just chillin' at this point.

On the Magic side of things, there's little good to find in this game, but it is unquestionable that Dwight Howard was their best player tonight. 20 Points and 7 Rebounds is a bit subpar for him, but it still gets him the Thunder Plunderer award on a bad, bad night. Aside from Pietrus, who had a solid 15 Points and 3 Steals, everyone on the Magic played horribly, shooting very badly on the floor and getting very little ball movement going. Pietrus could hit the occasional jumper and Dwight Howard would eat Krstic alive inside the lane, but the Magic couldn't get any type of consistent offense going after the first half.

Next Game: At the Kings, Tuesday, November 11th, at 9PM Central Standard Time