Another Interesting Move by Presti?

Share All sharing options for: Another Interesting Move by Presti? 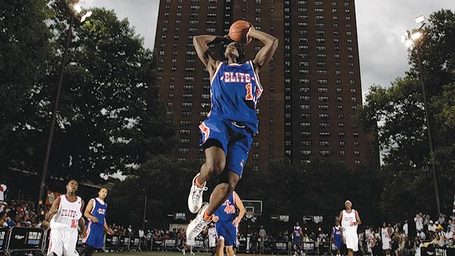 Oklahoma City’s D-League affiliate Tulsa 66ers made history tonight by drafting the first player straight out of high school. With the 16th pick in the first round Tulsa picked Latavious Williams from Christian Life Center Academy. This gives Oklahoma a cheap look at a highly touted high school star. Williams is a 6’8 205lb forward that has been compared to Chicago’s Tyrus Thomas.

Making history today: Latavious Williams - TrueHoop By Henry Abbott - ESPN
With a lot less notice than it deserves, Latavious Williams will make history tonight. Williams -- a 6-foot-8 small forward rated among the top high school players in the country -- will become the first player to jump from high school to the NBA's D-League. Why is this such a big deal? Let's back up one second: A year ago, Brandon Jennings made his own history when he became the first prep player to spend the traditional "one-and-done" year not in college, but in Europe. So far, it's worked out nicely.

Latavious Williams - Yahoo! Sports
An exceptional athlete with the capacity of playing with an impressive energy level, Williams has drawn comparisons to Tyrus Thomas of the Chicago Bulls. Assaulting the rim is his forte, but Williams also has touch on his jumper out to 17-feet and can make plays with the basketball. Defensively, he is an imposing presence with his shot blocking ability.

DraftExpress NBA Draft Prospect Profile: Latavious Williams
The name on this list most likely to garner national interest is that of Latavious Williams. To refresh your memory, Williams was the highly regarded power forward prep school recruit who committed to the University of Memphis, but decided to renege on the decision based on the expert advice of those around him. ""It was a difficult decision," Williams said in a press release. "But after consulting with a number of people, and taking my family situation into consideration, playing overseas is the best move for me." "It will not be an easy transition, but I have surrounded myself with a core of very competent people who I trust and who have my best interests at heart, so I am confident that things will work out very well." Williams’ "mentor/advisor" Trey Godfrey, who he knows thanks to his AAU ties, told Jeff Goodman of Fox Sports back in July that the decision was purely a financial one. "He made the decision when taking into account his family situation," said Godfrey. "He wants to put himself in a situation where he can help out and he saw this as a good opportunity." Goodman also quoted Godfrey discussing his belief that Williams will be able to garner a contract in the "six-figure range", and was mentioned having "a lot of interest from Europe and the Far East." Fast-forward three months, and Williams finds himself in the D-League draft pool, holding onto a B-level non-guaranteed contract for $19,000. Surely this isn’t the way he expected things to turn out?

Latavious Williams - College Basketball Recruiting 2009 - ESPN
Williams has the athleticism and leaping ability to dominate the boards on both ends of the court. Williams attacks the offensive glass and finishes offensive rebounds above the rim with tip-dunks. His leaping ability allows him to grab defensive rebounds out of his area but he does not do this as much as he should. He does not have a great back-to-the-basket post game and needs to improve his touch around the hoop. If he plays as a power forward, he needs to add a jump hook to his game. If he wants to develop into a quality small forward on the next level, he needs to improve his ability to hit jumpers as well as his ball-handling skills. If he does this could develop into a nice inside-outside, frontcourt player, as he seems more comfortable as a power forward than a small forward. Williams also needs to increase his defensive focus and intensity.