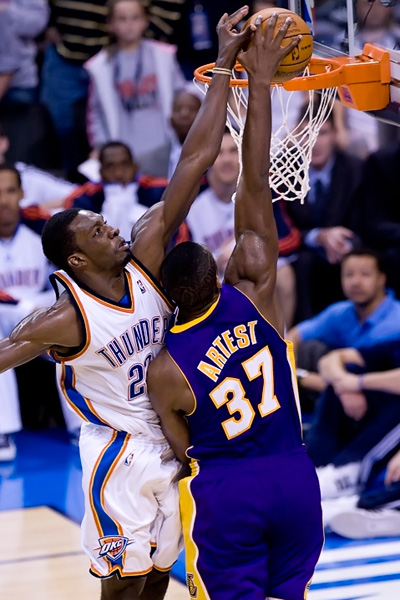 Thabo Sefolosha: Defensive superstar? | NewsOK.com
[I really wanted get a story up about Sefolosha before last night's game. So far this season Sefo has handled the likes of Kevin Martin, Ben Gordon, Brandon Roy and Kobe Bryant. Thabo has his starting position on lock. Check out this NewsOK article written before yesterday's game.] Seven years later, Sefolosha could be on the verge of emerging as one of the NBA’s best defenders. Oklahoma City demonstrated its belief in Sefolosha last February when it traded a first-round pick to Chicago for his services. Last week, the Thunder signed Sefolosha to a four-year extension believed to be worth $13.8 million. Kevin Durant called him the "heart and soul" of the team because of how he sets the tone defensively from the opening tip. "He’s our leader in that area, and we’re very fortunate to have him," Durant said. "He’s a guy that basically can lock down a premier scorer in this league."

THUNDER: Thomas Continues to Spark Second Unit
[Etan has continued to display the toughness that the Thunder has lacked at the center spot. Could Thomas and his flailing hair and elbows knock Krstic from the starting lineup?] Thomas’ block on a Lamar Odom layup attempt with a minute left in regulation led to Jeff Green’s 18-foot jump shot that tied the game and sent it to overtime. Layups and shots under the basket were not easy to come by for the Lakers whenever Thomas was on the floor. Neither Odom nor center Andrew Bynum scored in the fourth quarter. "He brings that, he brings the toughness," Brooks said. "He throws his body around. Guys on the other team, they know they better be ready to play because he’s not goinig to back down no matter who’s on the other team. I like that. I like the toughness he brings to the team." While the season is just four games old, this is the type of role the Thunder envisioned Thomas could serve when he was acquired in an offseason trade with the Minnesota Timberwolves. Thomas has been a bully in the paint for the Thunder, an interior presence and traditional low-post player the team did not have a season ago.

Vote for the Thunder for NBA TV's next game!!! So far we are winning!!!

Above The Rim
[It is nice too see Uncle Jeff finally starting to get a little more notice.] While everyone in the league recognizes that Jeff Green is a really good player, I think his star fades a bit next to the greatness of Durant and the emergence of Westbrook. He just quietly goes out and does his job every night. I was surprised to learn that he shot nearly 40% from 3 last year (38.9%) and hauled in about 6.5 boards. So far this year, he’s been outstanding. Though listed as a power forward, he’s probably more of a tweener. The Thunder list him at power forward to make room for Kevin Durant to play the 3 which is his natural position. Otherwise, Jeff would have to come off the bench. He’s one of those guys that just knows how to play. I think that’s the reason they drafted James Harden as well. He doesn’t have a flashy game. He just knows how to play. He’s like the perimeter version of Jeff Green.

Guest post: Why not Etan? | Daily Thunder.com
After thinking of everything, I thought to myself, why not start Etan Thomas? He brings a mean, physical attribute that Nenad Krstic doesn’t have in his bag. Thomas throws elbows every single time he comes down (even if there’s not a single person within 10 feet) from a rebound then gets in your face and lets you know about it. He gets the tough rebounds and outworks his opponents for a bucket. He’ll get in the other team’s head right from tip-off and will do everything in his power to make he sure he stays there.

Thunder's upset bid falls short vs. Lakers | NewsOK.com
[KD is bummed after last night's loss to the Lakers. On Twitter Durant posted: Played tough...I missed key shots... I apologize to my teammates, back to work tomorrow..thanks for the love and hateful comments. Then he posted this: Still a little frustrated about the game but we have 78 more! I work hard so it'll pay off!! Thanks again 4 the love and hate!! Hopefully he will take his frustrations out on the Rockets.] He [Durant] spoke to a group of reporters in a low monotone, holding back any emotion as he described what went wrong in his team’s 101-98 loss to the defending champion Los Angeles Lakers on Tuesday night at the Ford Center. His lengthiest response was three sentences, 22 words. His last reply, a nine-word answer, explained his disposition. "I could have won the game," Durant murmured. "I missed shots."

Ready for launch? Russell Westbrook’s slow start | Dime Magazine
[4 games into the season every is starting to doubt Westbrook again. I say give him more time.] Players like Russell Westbrook. Over the summer, I was the main one leading the charge in the Dime office over Westbrook, insisting he’d blow up this year like Deron Williams blew up in his second pro season. All the warning signs were there: After an underrated rookie year (his 15.3 ppg and 5.3 apg were right there with R.O.Y. Derrick Rose), Westbrook worked out like a decathlete in the offseason, tore up the Orlando Summer League (22 ppg, 7.8 apg, 2.5 spg), and got positive reviews from his time at the Team USA mini-camp in July.

Rockets' Budinger to miss tonight's game vs. Lakers | NBA Basketball | Chron.com - Houston Chronicle
[This could be good news for Friday's game. Budinger has been a solid contributor off the bench for the Rockets] Rockets forward Chase Budinger will miss tonight’s game against the Los Angeles Lakers because of a sprained left ankle. Tests on Tuesday were negative, but with Budinger still sore Monday morning, the decision was made to have Budinger sit out tonight’s game. He is day-to-day, with the Rockets hosting the Oklahoma City Thunder on Friday.

Star-spangled save: What Maurice Cheeks did for anthem singer in Portland is still remembered | NewsOK.com
[This is interesting. Mo Cheeks gave a special assist with the Star Spangled Banner. Check out the video below.] His name is Maurice Cheeks. He just happens to coach basketball. He was hired last summer to serve as an assistant under Oklahoma City Thunder coach Scott Brooks. What he did on the night of April 25, 2003, is now remembered simply as the "Maurice Cheeks moment." It's documented on YouTube, keeping alive the impromptu impact the man had on one teenage girl and countless others throughout the country.

Film Study: Serge Ibaka’s baptism by fire | Daily Thunder.com
[I overlooked mentioning these two posts by dailythunder.com. Check them out if you haven't already seen them.] To the delight of I think every Thunder fan out there, Serge Ibaka saw his first real playing time of the season Friday night in Detroit. He played three minutes and just pulled down one rebound. He didn’t do much but Scott Brooks likely wanted to just get Ibaka some burn and will likely kind of work him into the fold as we go.The way he’s going to find a place in the rotation is if he brings great energy and does work on the defensive end. But how did he do? After the jump, I’m going to put on my breakdown hat and look closely at a few possessions with Ibaka.

Film Study: James Harden’s eight assists against Detroit | Daily Thunder.com
If you can’t tell, I’m a little obsessed with the details of basketball. I like knowing how and why the other team scored, as well as my own. Anyway, James Harden caught some attention last Friday with his eight assist performance in Detroit. He’s also caught a little criticism for his supposed slow start to his rookie year. But I wanted to break out some video to show exactly what Harden brings to the floor and why he’s going to be an absolutely dynamic offensive player for the Thunder. He can score, don’t worry. That stuff will come. But lots of athletic guys can score. What Harden’s got is intelligence, an understanding of the game and the most important thing of all – this thing called feel.

D-League Draft - InsideHoops.com
[Draft day is tomorrow!!! Well, at least for the D-League. Check it out if you are interested in the 66ers.] The 2009 NBA D-League Draft will take place from the NBA TV studio in Atlanta tomorrow, Thu. Nov. 5. The draft will be televised on NBA TV beginning at 7 p.m. (EST). During the telecast, NBA TV host Rick Kamla will share the stage with NBA D-League Vice President of Basketball Operations and Player Personnel Chris Alpert to provide insight into the draft proceedings and the composition of NBA D-League team rosters.

Here are some highlights and interviews from the past few days.