In the 1st, Nenad Krstic showed that he didn't belong in this game right off the bad. He missed shots badly, played no defense on Bynum, and let rebounds fall easily into Laker hands. Obviously, he's tonights Thunder Blunder. In steps Etan Thomas. Everyone cheered for him when he came on the court, and I thought it was not rightly so. But, he proved his worth when he played tonight. Tightly contested defense, not horrible offense, and a good fight put up for every rebound. It is for this reason that he earns tonights Thunder Down Under award. To be honest, we couldn't have done it without him.

But, even though Krstic set us back, we came charging back, enough to get it to within one twice in the 2nd quarter. Buy the 3rd, it was a back and forth battle, with neither team able to establish any dominance until late in the 4th. The Lakers were down 83-81 with 5:24 to go. Then, Ron Artest made a free throw and drew the Lakers to within one. Then, after a couple of missed shots, Ron Artest made a layup, and Kobe sank a shot. Then, after a surprising Laker time out, Kobe hit 2 more free throws, and just like that, with 2:44 to go in the 4th, the Thunder were down by 5, and I figured it was all over. 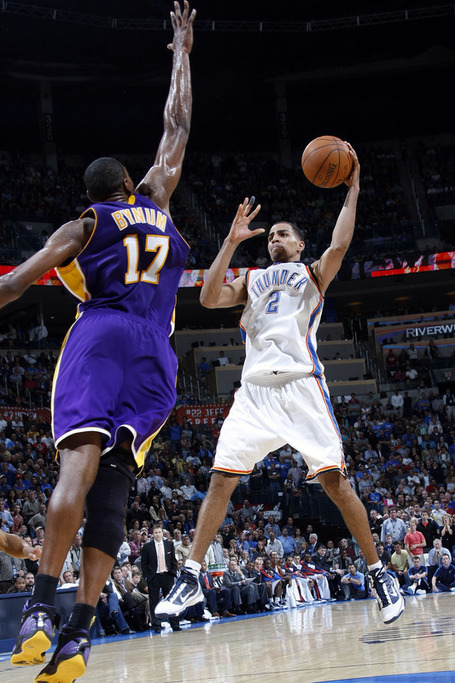 Thabo played out of his shoes tonight!

Thabo Sefolosha had something to say about that. Just as my hopes lowered, I saw him sink an easy, open 3 to put us within 2. The Lakers tried to hold the ball, but they just ended up missing another shot, opening the way for another Sefolosha jumper, tieing the game at 88. The moments I just explained are critical to the development of a team. It's one thing to contend with a Championship caliber team for a half or even most of the 4 quarters, but it's another to come back from a 5 point deficit and force it into overtime. That's what good teams are made of. And that's why Thabo Sefolosha gets the Thunder Wonder award tonight. Simply fantastic!

After a couple of mid-range shots from Kobe and Jeff Green, the Thunder had the ball with an opportunity to win. 25 seconds on the clock, and the best shot we came up with was a Kevin Durant 3 Pointer? He was cold all game, and I would have much rather had Jeff Green take the shot. And we didn't even have to take a 3. Why not drive in for a layup and draw the foul? I guess it was a safe thing to do, but I'd rather us have gone for the win. 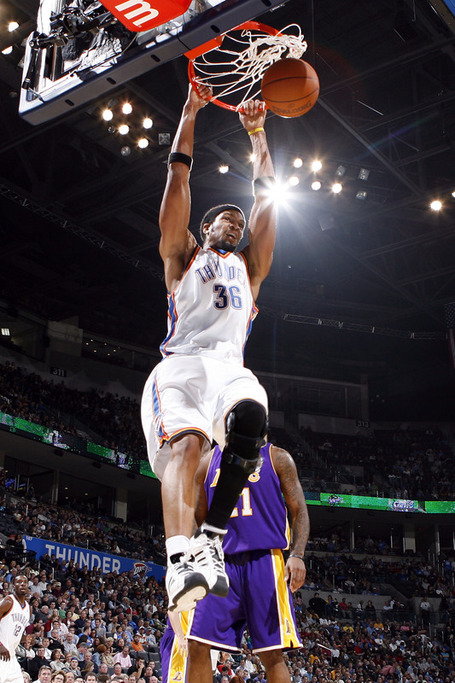 Eventually, it came down to overtime, and it didn't disappoint. Etan Thomas and Russell Westbrook both threw in points, and Jeff Green hit a clutch jumper to put us within 1 late in the quarter. Eventually, Sefolosha and westbrook both missed two potentially tieing 3 pointers at the end, and the Lakers came out victorious.

When you lose by 3 points in overtime, there's no obvious flaws to point out about our performance. Nevertheless, we could definitely do with a consistent 3 point shooter. Kevin Durant and Russell Westbrook were ice cold from the arc, and while Sefolosha and Green did admirably, neither are specialists, and it would be nice to have a go-to guy for the type of thing. I'm looking at you, James Harden.

On the Lakers side of things, it was business as usual. Their bench was totally useless, and their starters were all superb (except Derek Fisher.) As much as I hate to do this, you've got to hand it to Kobe Bryant for playing with the flu and still leading his team in scoring. For that reason, he gets the Thunder Plunderer award for tonight.
Next Game: At the Rockets, Friday, November 6th at 7:30 PM Central Standard Time.
Lets get back above .500. Yay for an easier matchup!