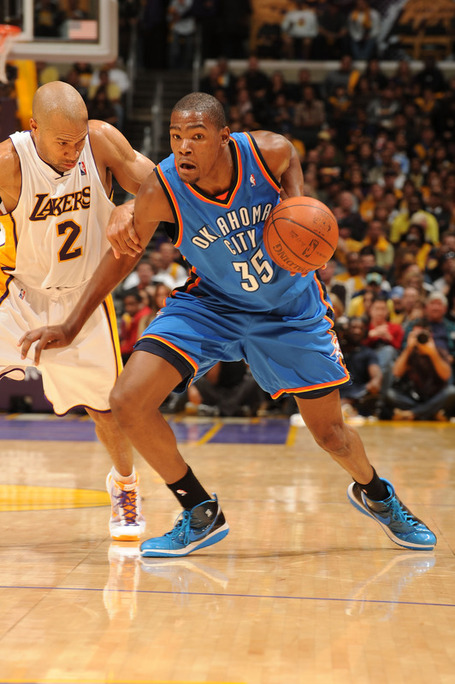 Thabo Sefolosha: Mr. Defense
The Oklahoma City Thunder recently secured a four-year $18.3 million contract extension with 6'7" forward/guard Thabo Sefolosha, thereby solidifying him as a critical part of their rebuilding efforts. What is it about Sefolosha that makes him so special to this team? Mad defensive skills. He brings much more than this to the game, but his proven stand-out defense addressed one of the holes the Thunder were looking to fill. Sefolosha, the NBA's first Swiss player, honed fundamental basketball skills at the European level for four years before coming to the USA. Smoothly athletic with a high basketball IQ, he gained a reputation for being a solid perimeter defender and rebounder with his long arms, exceptional footwork and his intuitive ability to give space and take space from his opponent.

Off night puts KD in fix-it mode
You probably remember the game well. Durant’s 3-for-20 shooting performance on Nov. 1 is not easily forgotten. But the best thing about it is Durant didn’t want to let it go. He identified what went wrong and vowed to himself that he’d correct it. The problem? Too many jump shots. "I wasn’t getting to the rim as much as I wanted to or I was supposed to in order to help my team," Durant said. "Once I had that game I said I can’t do that again." The difference in Durant has been ten fold. He’s now getting to the basket more than he ever has. It’s led to better production, greater efficiency and, most importantly, has put Durant, in his third season, on the verge of becoming a truly unstoppable player.

The Associated Press: Lakers beat Thunder for 11th straight time
Kevin Durant led Oklahoma City with 19 points, after getting 30 or more in five of his previous seven games. The Thunder have given up 100 or more points in each of their last three contests, after allowing fewer than 90 in six of their first 11 contests. Durant, who came in as the league's fifth-leading scorer with a 27.7-points average and had 28 in the first meeting with the Lakers, missed his first five shots in the rematch while Bynum made his first five to help Los Angeles pull out to a 27-8 lead. Bryant, who scored nine points in the final 2:01 of the quarter, turned a one-bounce offensive rebound into a buzzer-beating bank shot from the foul line to give the Lakers a 35-16 cushion. Durant, who made a league-best 452 free throws last season, had only one against the Lakers. It came at the end of a three-point play that trimmed the Lakers' lead to 61-42 with 8:42 left in the third, and was his only attempt from the line.

The Thunder Exhibit Successful Rebuilding
Every time I see the Oklahoma City Thunder knock down an unsuspecting victim, I can’t help 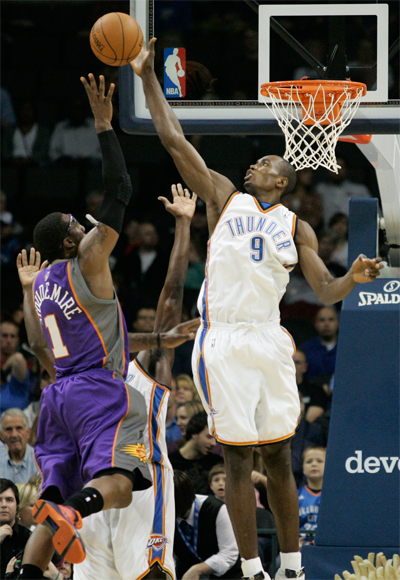 but laugh. My laughter is directed at all the teams who refuse to rebuild or at unsuccessful at rebuilding. My laughter is directed at the New York Knick, Golden State Warrior, and the Minnesota Timberwolve-type teams on the NBA. The Oklahoma City team is currently sitting in the middle of the pack in the Western Conference with a respectable 7-6 record. The team has shown that it has turned the corner – from being an automatic win for opponents – into being a tough, formidable foe. Last season, the Thunder began the season winning only one of their first seventeen contests, and they didn’t win their seventh game until January 14. Only thirteen games into the 2009-2010 season, the Thunder have posted wins against the Eastern Conference champion Orlando Magic, at San Antonio, at Miami, and against the offensively equipped Washington Wizards.

Incredible Journey | Serge Ibaka
His spike in rebounding was encouraging after the coaching staff challenged him to become more aggressive in the paint. "So that shows you that he’s picking up on stuff," Ehambe said. "It’s amazing how bright he is." Ibaka’s English had greatly improved each month heading into training camp, and by mid-September he had already passed the written portion of his driver’s test. But Ibaka is still adapting to the NBA game. It’s a main reason why the forward has remained in the United States since Las Vegas. It’s also helped that he attended most if not all voluntary workouts back in Oklahoma City, where he’s had the chance to meet and bond with his new teammates. As the season progresses, Ibaka will continue to learn the game’s nuances. "I know I’ll get it," he confidently said. Added Presti, "It’s that humility that we really like about him. And he wants the challenge of continuing to try to get better and he’s excited about that. It’s a big undertaking for someone that age to come over at 19 years old and tackle these things. So it’s going to take some time. It’s going to take support from the organization, the fans and everyone involved to continue to understand what he’s trying to do, and ultimately let him be who he is."