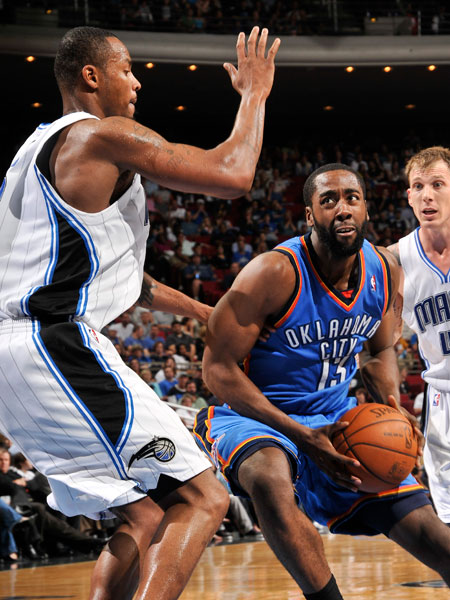 NBA.com: Horford anchoring Hawks' early hot start
[Thabo gets more love on his defensive efforts this season.] Why does Sefolosha -- who shot 23.8 percent and had a 4.3 ppg scoring average in three games last week -- land in the Five on the Rise? Because during his struggles, Sefalosha slowed down one of the NBA's elite players (Miami's Dwyane Wade) and pestered another (San Antonio's Manu Ginobili). The Thunder's go-to defensive stopper was quick to give credit to his teammates as he and Oklahoma City kept Wade to 22 points on 6-for-19 shooting in Tuesday's win at Miami. "Everybody did a very good job playing team defense," Sefolosha told The Oklahoman. "You have to be excited going against guys like (Wade). The team did a tremendous job closing down his drives and taking away the easy stuff." Against the Spurs, Sefolosha helped keep Ginobili to an 0-for-8 night and also held Richard Jefferson to 1-for-4 shooting in a big win on Saturday in San Antonio. Oh yeah, and Sefolosha had what was essentially the game-winning steal on Jefferson, too.

Kevin Durant's shoulder shimmy is another unique foul-line tradition| NewsOK.com
[Have you noticed that little shoulder shrug that Durant does every free throw? NewsOK proposes that KD's ritual not only makes him unique but better at the charity stripe.] "It doesn't help you miss or make a free throw," Durant said of the rituals. "But guys just like to have their own unique little deal." Jim Poteet, a former basketball coach and athletic director at Southern Nazarene, disagrees. Poteet has won more than 300 medals in free-throw shooting competitions and wrote his doctoral dissertation at Oklahoma State on "The Paradox of the Free Throw," contending that what makes the free throw look so easy actually is what makes it so hard. A ritual, Poteet said, is vital to successful foul shooting. Too often, Poteet said, players think negatively by hoping they don't miss, add pressure by thinking they've got to make the shot or think nothing at all, which allows their minds to wonder aimlessly. "When you step to the line to shoot the free throw, you want to become process-oriented rather than outcome-oriented," said Poteet, who once made 489 consecutive free throws. "When you watch Kevin, he's one of the very best free-throwers in the NBA because you see him never change the way he takes a free throw." 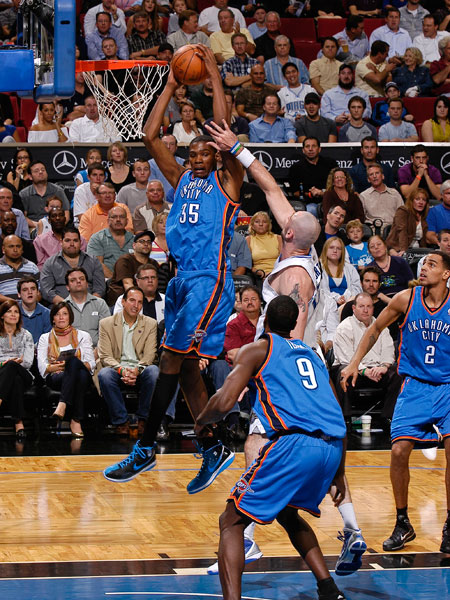 [Just in case you did not know where Durant got his signature post-dunk roar.] Durant's favorite player when he was growing up was Carter. "When I was growing up and 8 or 9 or 10 and I really started getting into basketball. I thought he was the best player ever," Durant said before tonight's game. "I still look up to him. Even though people say he’s not the old Vince Carter, I’ve watched him in the league since I’ve been here, and he’s proved people wrong. So, I’m still a big fan. He’s still my favorite player." Of course, Durant's no slouch himself. He entered tonight's game averaging 28.5 points per game and has led the Thunder to a 6-5 start. Durant grew up in Washington, D.C., and he would attend Washington Wizards games when Carter came into town with the Toronto Raptors. Durant smiled as he recalled those days. "I used to go to nba.com all the time and watch the highlights," Durant said. "When I was 11 years old, my mom bought me the whole Vince Carter Toronto jersey when the new ones first came out. I had the shorts and the jersey, and I wore them to every game when I was 10. It was something I’ll never forget."

Court Report: Brand recognition - FANTASY - Yahoo! Sports
James Harden hit six threes as part of his 24-point outburst on Wednesday. While I do think Harden has a great future in this league, this doesn't do much to change my conservative outlook for him in the current season. Keep in mind that his production came in a blowout loss where none of the starters from either team saw the court in the fourth quarter. [Here is more Lucky Harden love after his junk time offense last hump day. Maybe I shouldn't use love, junk, hump, and Harden in the same sentence again.]

Peace, Love and Thunderstanding: The Michael Beasley Project | Daily Thunder.com
[Over at the DailyThunder.com, this article examines the possibility of Lebron and Bosh migrating to Miami and how OKC could get Beasley out of the deal.] Presti’s blue print for building the team has put a lot of emphasis on chemistry. On the other hand, it has never seemed to be Beasley’s teammates who have complained about him on the floor or off. So, it would be unlikely that his presence would upset the players. Also, Beasley has a good relationship with team star and captain Kevin Durant who actually played on the same youth league team when the two were growing up together in the Washington D.C. area. The other question is whether the fans would accept him. This is a conservative part of the country that one would expect to turn their noses up toward someone with a questionable past. However, and this is a big however, that conservatism also brings about an air of Christian charity. Oklahomans have welcomed people seeking second chances with open arms (i.e. Eddie Sutton, JamesOn Curry, too many Sooner football players to count)…especially if those people can help their teams win. The final point before opening this up to comments is this: Do the Thunder make such a trade knowing that they might be assisting another team to becoming an extended dynasty–especially when we are hoping our team builds such a dynasty during the same stretch? My thought is, why not? It is still a long shot for Miami to get all three, even if they shed the requisite salaries. Even if they do, they will be extremely thin when it comes to depth. Also, with Miami in the Eastern Conference, the Thunder wouldn’t have to worry about them until the Finals…and with a core of Durant, Beasley, Jeff Green, Russell Westbrook, and James Harden that might be a yearly battle.

THUNDER: Friday Night: Wizards at Thunder
Every player gets up for his former team, regardless if he admits it or not. While the record shows that Thomas has been employed by four NBA teams, he has not suited up for anyone but the Wizards prior to being traded to the Thunder from Minnesota this offseason. And most of Thomas’ former teammates are still with the Wizards. Thomas, who was active in the D.C. community, averaged 6.0 points, 4.9 rebounds and 51.6% shooting in seven seasons in Washington. He’s been a key reserve for the Thunder this season.