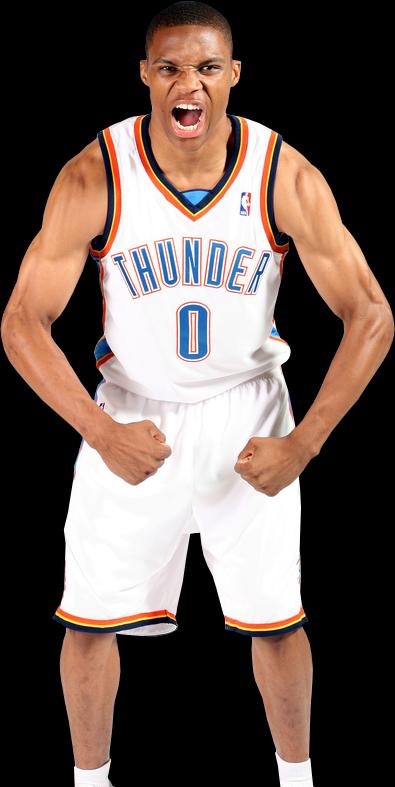 If you seen the ruckus last night you might be wondering to yourself about Wade pulling Westbrook out of the fray and seemingly giving Russ a little pep talk. A classy move by Wade that is for sure, but have you forgotten that Wade has coached Westbrook before? I'm sure you remember when Durant dropped a record setting 47 points in last year's Rookie Sophomore game. In that very game Westbrook was coached by a flamboyant Wade. Did they form a special bond? I don't know, but apparently there is a certain level of respect between Westbrook and Wade.

THUNDER: Looking Back on the Thunder’s 100-87 Win over Miami
Speaking of Westbrook, Thunder head coach Scott Brooks called this the second-year point guard’s finest performance of the season. Westbrook also finished with seven assists, a steal, a block and just two turnovers. He also refused to back down from a grizzled veteran with nearly nine inches on him. Westbrook was called for an offensive foul late in the second half while backing down Mario Chalmers in the post. Chalmers fell backward, Westbrook lost his footing, center Jermaine O’Neal, standing nearby, wrapped up Westbrook and then shoved him aside. Westbrook didn’t like it, and he let O’Neal know about it. Whistles blew, players had to be separated and both Westbrook and O’Neal drew technical fouls. Yet it didn’t throw Westbrook off his game. He never seemed ruffled. In fact, he only played better. Brooks said that type of grit from his point guard from the get-go. "I thought Russell, from the start of the game, I thought he dictated the game with his defense," Brooks said.

Losing in a very consistent manner to Oklahoma City Thunder | Hot Hot Hoops
A quick take on Oklahoma City. I think they’re going to become what everyone’s been waiting on from the Portland Trailblazers. They’re really young and growing around each other. And how symbolic that it will be Kevin Durant and the Thunder flying up the Western Conference as Greg Oden and the Trailblazers have another year of almost. Do not sleep on Oklahoma City. 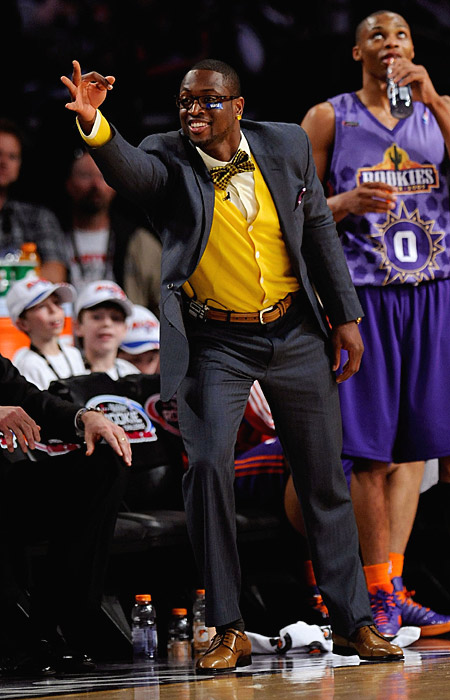 AP: Durant, Thunder beat Heat, 100-87
Charge? Block? How about both? Green and O'Neal were both called for fouls 1 minute after tipoff, when officials apparently had trouble deciding if Green was guilty of charging or O'Neal guilty of blocking. "Ain't never heard that before," Wade announced, before the teams had a jump ball at midcourt to decide possession. ... The Thunder had six players with two fouls in the first half, while the Heat only had seven total fouls in the opening 24 minutes. ... Miami's Udonis Haslem appeared to be favoring his left shoulder when he departed with under 2 minutes remaining. [See the picture below. Haslem fell to the ground once Collison went up to score.]

Ball Don't Lie - NBA - Yahoo! Sports
For those of you that thought Miami's hot defensive start was a bit of a fluke, well, enjoy this one. The Heat gave up about 114 points per 100 possessions in this one-sided affair, a Thunder win that was more impressive than you'd think because of the slow pace. Kevin Durant was the catalyst, but not the focus, in spite of his 32 points. Russell Westbrook was able to penetrate at will against Mario Chalmers (who had enjoyed a good start to the season in terms of on-ball defense, after working as mainly an off-ball hawk last year), finishing with 24 points on just 13 shots. Seven assists for Russell, who turned the ball over only twice. The Thunder continue to play expertly on defense. Daequan Cook finally came to life with 17 points off the bench, and Jermaine O'Neal had another nice game with 19 and 10, but Dwyane Wade missed 13 of 19 shots, and nobody else appeared to step up for the Heat. Thabo Sefolosha has always had success in guarding Wade.

NBA.com: To hang up or not hang up, league wrestles with No. 23
Kevin Durant would appear to be the perfect first lieutenant in the LeBron James crusade. KD, after all, first picked up a basketball when the Bulls were dominating the basketball world, is close to James and happens to be a Nike guy. If anyone believes in the sanctity of No. 23, it ought to be Durant. Surprise, surprise. "I have a lot of respect for Michael Jordan and LeBron is one of my best friends, so whatever he wants to do as far as his own number I'm behind. But I also know who came before me," Durant said. "Nothing against MJ, but if you retire his number around the league, what about Bill Russell and Oscar Robertson and Elgin Baylor? And all of the other great players who went before? "If you're going to do that for Michael, you should do the same for the rest of those guys. Whatever happens, happens. I just don't think guys like Russell and Robertson and Chamberlain should be forgotten." Durant's sense of history belies his 21 years. As for the Jordan debate, it hasn't subsided since James announced his intention on TNT to honor His Airness by switching from No. 23 to 6 next season and lobbied for the league-wide retirement of the number.

Building a reputation for Thabo | Daily Thunder.com
So I’m here to try and start creating that reputation for Thabo. I’ve watched him for about 30 games now and the guy is outstanding. Just outstanding. He plays with energy every night. He hits the glass. He helps. He cuts off passing lanes. He blocks shots. I think he defends three guys at a time. He. Does. It. All. You can see Thabo’s face lighting up to the challenge of guarding a great player. Some guys want to shoot it 20 times. Some want the glamour of a big highlight dunk. Thabo is in it because he wants to lock you down.

Kevin Durant scores 32 in Miami's win | NewsOK.com
In contrast to Durant, Miami star Dwyane Wade was harassed by Thunder defensive stopper Thabo Sefolosha. The reigning scoring champion scored 22 points but was 6-of-19 from the field. Wade once again filled up the stat sheet, but also had six turnovers. "There are certain guys like Thabo that do such a great job a lot of fans might not realize," said the Thunder’s Nick Collison. "His job is not easy, chasing big-time scorers around screens. He’s so important to our team. He’s the best player I’ve ever played with guarding the (star) players." Sefolosha scored only two points but had a major impact on the game with four steals, four assists, nine rebounds and a solid defensive job on Wade. "We’ve been playing great team defense, and Thabo is an unbelievable defender, one of the top five in the league," Durant said. "He’s been the anchor." 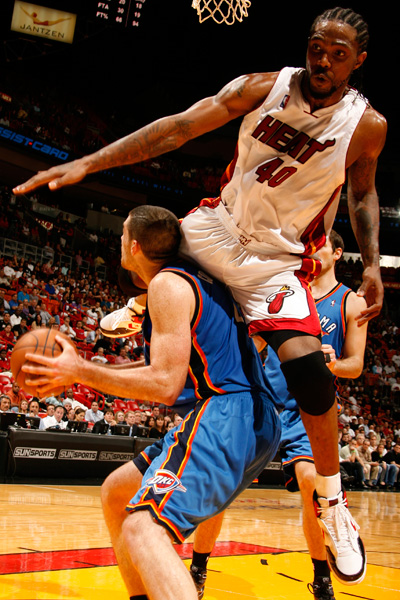 Thunder notebook: Clay Bennett visits Miami | NewsOK.com
Team chairman Clay Bennett and other Thunder executives attended Tuesday’s game, in large part to gather information on the Heat’s revolutionary 3,400-square-foot video board that was installed in May outside American Airlines Arena. Giving the arena a Time Square-like presence, the gigantic video board is a major revenue stream for the Heat. The largest digital LED display in the Southeast region of the country, the Heat can promote upcoming events on the board and sell advertising on it that can be seen by cars on the highway. [So Bennett wants to turn Reno and Broadway into Time Square.]

66ers To Hold Free Intrasquad Scrimmage Tonight|NewsChannel 8
The public is invited to a public intrasquad scrimmage featuring the Tulsa 66ers Wednesday night. The scrimmage will be held at 7 p.m. Wednesday night at the newly-renovated Tulsa Convention Center in downtown Tulsa. There is no charge for admission. 66ers President Jim Brylewski says the team wants to give the fans a sneak peek at this year's team so they can see how exciting the season is going to be.

Oklahoma City Thunder (6-5) at Orlando Magic (8-3), 7 p.m. - Basketball Wires - MiamiHerald.com
Oklahoma City will now try to prevail in a venue it hasn't won in since March 13, 2004, when the team was still located in Seattle. The Thunder/Sonics have lost in five straight visits to Amway Arena, while the Magic have emerged victorious in seven of the past eight meetings between these teams. The Thunder did rout Orlando at the Ford Center back on November 8, however, with Durant pouring in 28 points in an easy 102-74 win. Oklahoma City also gets to face a Magic squad that won't have standout point guard Jameer Nelson in the lineup tonight, or for any game in the immediate future. The 2008-09 All-Star tore cartilage in his left knee during Orlando's 97-91 decision over Charlotte on Monday and will need arthroscopic surgery that will likely sideline him from four-to-six weeks.