The Thunder have won against one of the top teams in the East on the road, after dropping one on the road against the lowly Clippers! Hells Yeah! Why? Well, read on to find out....

It all started late in the first quarter. The Heat had just finished a mid quarter run of 12 points to 5, and they did it by penetrating with Dwayne Wade and getting the ball down low. Then, the game entered a short dry spell with the Thunder only scoring 4. But with 1:06 to go, Collison hits a jumper and Etan Thomas banks one in. Meanwhile, Miami is committing bad turnovers, and Joel Anthony only hit one from the line. The key factor here is that, with 4 seconds to go, Kevin Durant rebounded Joel Anthony's missed free throw, jetted down the court, and got fouled while shooting a 3. Then, Dwayne Wade made a particularly nasty remark to the ref, giving KD a 4 point opportunity. He hit all 4 free throws, which was extremely clutch. That's an 8-1 run, all in the span of a minute, and it set the tone for the entire game. It even continued for a bit into the next quarter, with the Heat settling for too many jump shots, and the Thunder completing a 20 to 1 run.

But then, late in the 2nd, Hockey happened. Russell Westbrook leveled Mario Chalmers, and Jermaine O'Neal didn't like that very much, so he moved to attack position and shoved Westbrook. Wade and Haslem grabbed Westbrook before he could do any more damage, but then Haslem got into the shoving a bit, before Wade got him off to the side and calmed him down. It resulted in an offensive foul for Westbrook, and a technical for O'Neal and Westbrook. You know, I'm not a big fan of Dwayne Wade on the court, but off the court he's a solid guy, and it showed here. I'm not trying to be a righteous person or anything by saying that players in the NBA are punks or that the Thunder are one of only a few teams in the NBA with good values. I'm just saying, how often do you see someone from the opposing team grab someone to try to prevent a brawl? That's solid, and it reminded me to not judge a players character by his play on the court.

It really only got close again towards the end of the 2nd and beginning of the 3rd. The Heat found their game, and were starting to drive inside and penetrate our defense again. They managed to get within 3, but whenever it seemed the Heat might finally break that barrier, the Thunder would immediately respond with a score of their own. Eventually the Thunder pulled away to a double digit lead, and the game was never close again from that point on. 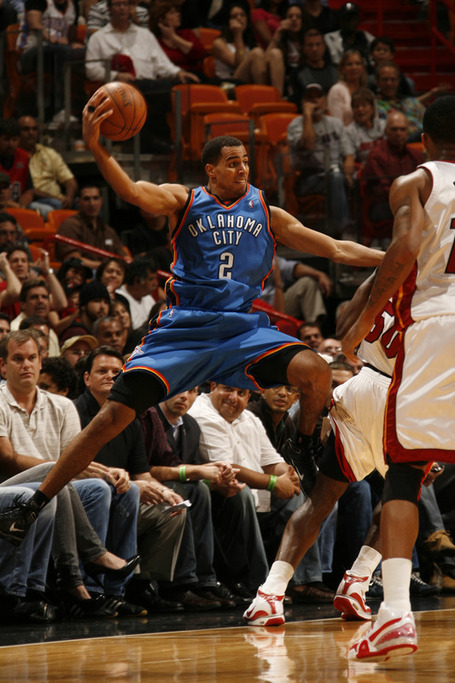 Analysis wise, a big reason we won this game is Thabo Sefolosha. He found the perfect way to play Dwayne Wade. Guard him close, but never let him get the foul, and constantly look to force turnovers. When you look at the box score, it doesn't show, but Wade was held to 7 points under his average, he had to distribute more than normal, he shot 6 of 19, and he had 6 turnovers. In my book, that's a success for any defender. And it earns him tonight's Thunder Wonder award. I know, I know, Kevin Durant had another great game, but in all reality, without Thabo, this game could have been a lot closer. 9 Rebounds, 4 Assists, and 4 Steals. I'm not even going to mention his offense, because it doesn't matter.

But, you've still got to give props to Kevin Durant, even though he only got the Thunder Down Under. 32 Points on 11 of 23 Shooting, 9 Rebounds, 5 Assists, and 4 sunk Free Throws when the Thunder needed them the most. And you might say I'm snubbing Russell Westbrook, but I'm really not. And it has nothing to do with his brawl. He had a great game, with 24 Points, 2-3 3 Point Shooting, 7 Assists, and only 2 Turnovers. But the fact remains, the other two made plays that were crucial to the winning of the game, while Westbrook had nothing of the sort. A great game for all 3, but only 2 can be the Thunder Wonder and Down Under.

Even though this was a great game, a Thunder Blunder award still has to be given, and this time, it goes to Jeff Green. He wasn't in foul trouble this time, but he shot only 4-14 for 13 points, and only had 2 rebounds and assists. Not terrible, but when you score less than the amount of shots that you took, then you know there's a problem. 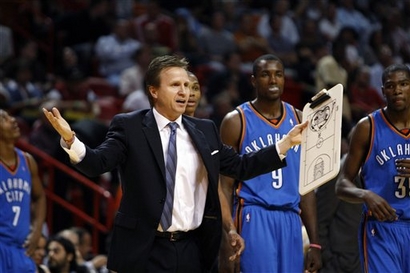 Scott Brooks might be confused, but Zorgon has the answers!

The question remains: Why did we win this game, and lose the last one against the Clippers? First of all, defense. When we played the Clippers, we were going against a great defensive team, with stalwarts like Marcus Camby and Chris Kaman clogging the lane, and Baron Davis getting the steals on the perimeter. Here, Jermaine O'Neal was the only guy who was there to clog the lane, and he's a more offensively minded guy. It opened up the lane for our guys, especially when he was off of the floor. There's a reason his plus minus was -3, better than most everybody else on the Heat. If he had played only 30 minutes, I'd venture to say it would be in the positive category, as 38 minutes is a lot for a Center, and he probably got tired. On top of that, in the Clippers game, we had 7 steals to 12 turnovers, whereas in this game, we had 11 steals to 11 turnovers. Any time you can equal your steals and turnovers, you know you're going to have a good night.

Second of all, our 3 point shooting improved slightly and our free throws were almost perfect, so there was an offensive factor in there as well. Third of all, last game, we realied way too much on Durant. He scored 40, but nobody else stepped up to help him. This game, Westbrook stepped up to be second banana, taking a lot of the pressure off of him, and forcing the Heat to look in two directions. 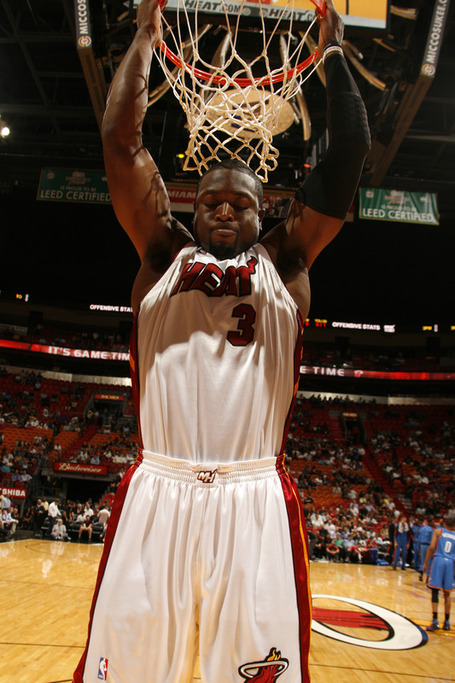 Even Wade's attempt at finding his zen didn't help the Heat this time.

Lastly, on the Heat side of things, it's got to be disconcerting having Wade perform below average, and to lose in such a fashion, even with Chalmers and O'Neal back. But, I wouldn't get too worried just yet. The Heat are still 7-3, and they have winnable games against Atlanta, Toronto, and New Orleans coming up. As long as they can stay healthy, they'll be back near the top of the East before long. Regardless, tonight, Jermaine O'Neal was their clear top performer. 19 Points, 10 Rebounds, and a lot of positive influence during the game get him the Thunder Plunderer award. Daequan Cook also did a good job of exploiting the fact that the Thunders perimeter defense was focused on Wade, as he shot 5-11 from the floor and 4-9 from the 3 Point line for a season high 17 points. His +/- ratio was +8, but it was only by virtue of being on the floor during the 2nd quarter run, and scoring a lot of points early in the 4th, when the Thunder had already amounted a large lead.

Next Game: At the Magic, Wednesday, November 18th, at 6:00 PM Central Standard Time