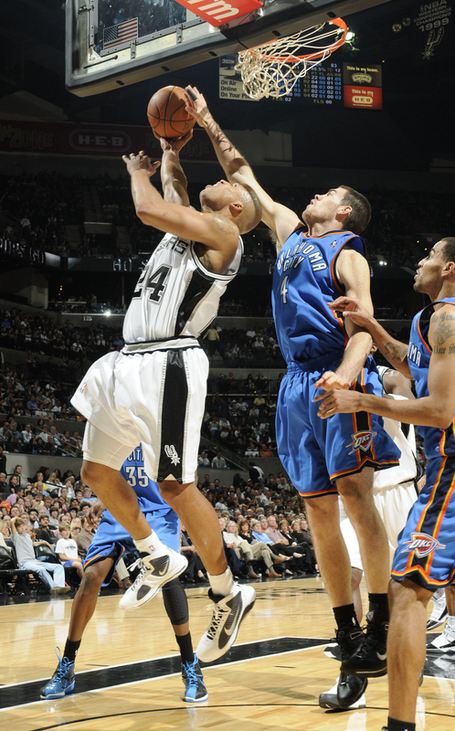 We moved the mountain!

I'm a bit in shock after this win, really. The spurs had a full lineup, a 2 game winning streak, and were at home....he did we manage to win? It might be my image of the spurs being the NBA's impenetrable wall of defense, which is about half a decade out of date, but man, am I excited about this win.

The game was fairly tight during the duration of its run, except when the Spurs had a 53-43 lead near the end of the 2nd. But, that was when the Thunder really showed up, as they were back in front with 9:18 to go in the 3rd.

After that bad run of luck, the Thunder never trailed by more than a point, so their victory should have seemed secure. Yet, these are the Spurs we're talking about, so there's no way one can ever count them out of a game. With 31 seconds to go in the 4th, they were down by 6, and it was looking pretty bad for them. But then, George Hill made a 3, cutting the lead to just one possession. After Kevin Durant made both of his free throws, Tony Parker promptly made a layup, keeping the gap at one possession. We all held our breath as Kevin Durant barely missed one freethrow, only increasing the lead to 4. Michael Finley missed a 3, but the Spurs managed to tip it in in what looked like a mess from a College game. As the lead was down to two with 2 seconds to go on the clock at this point, Thabo Sefolosha was in the same situation as Kevin Ollie was last game. If he makes both, the game is sealed, but if he misses one, the game is in danger of overtime. Guess what happened? He missed one. Luckily, the Spurs could barely get it over half court before time expired, and George Hill had to resort to an extremely long, leaping 3 that easily missed the mark.

There's no question as to who tonight's Thunder Wonder is. Russell Westbrook had a cool 19 Points on 7-13 Shooting, 5 Rebounds, and 11 Assists, making for his first solid performance in a while. I mean, he outperformed Tony Parker! That's a statement in and of itself, even though Parker was coming back from an injury. Also, Jeff Green did more than enough to earn the Thunder Down Under award, scoring 21 Points on 8-19 shooting, and grabbing 10 rebounds.

It was clear that Scott Brooks wanted to exploit the fact that the Spurs didn't have a very good defending center, as Nenad Krstic took 3 of the first 4 shots. He missed two of them, but he finished with a solid 5-11 shooting performance, with a surprisingly high 7 Rebounds, 2 Steals, and 3 Blocks. Nevertheless, sometimes oyou wish that he could make his mid-range shots more often. They're hardly ever contested, and he manages to brick half of them.

A key to the victory could have been the fact that the Thunder managed to outrebound the Spurs. One would think that such a team would manage to be excellent rebounders, but for some reason, guys like Nenad Krstic were grabbing rebounds for us, and nobody but McDyess and Duncan was able to grab rebounds for the Spurs.

One can't really give a Thunder Wonder award for this game fairly, because....well, nobody had a bad performance. So, I'll just give it to Thabo Sefolosha for missing a crucial free throw at the end of the game. Yes, fate can be cruel.

On San Antonio's side of things, you'd got to expect better things from players like Manu Ginobili and Richard Jefferson. Together, they combined for 1-12 shooting and 11 points. Sure, Ginobili did some rebounding and distributing, but you'd expect these guys to get at least 10 points a game on their own. Still, there's no question that Tim Duncan was the Thunder Plunderer for this game. He had 22 Points, 10 Rebounds, 3 Assists, and a couple of sick dunks. Even when some things go wrong for the Spurs, Duncan is the only constant. You can't discount George Hills contribution, either, as he scored 18 points too make up for Ginobili and Jeffersons floundering. And Tony Parker had his usual performance, adding 17 Points, 5 Rebounds, and 5 Assists.

Next Game: Versus the Clippers, Sunday, November 15th, at 6:00 PM Central Standard Time

As a Taco Bell fire sauce packet once said: "Ah, we meet again."